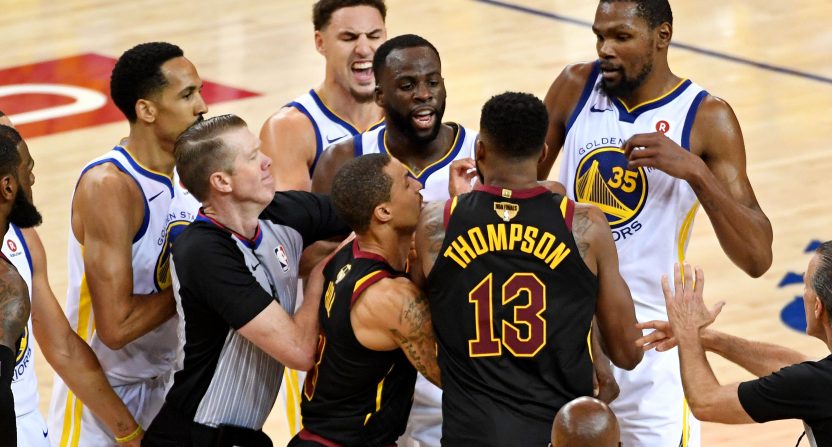 Afterward, all kinds of punishment was on the table. Would Thompson be fined heavily or even suspended? Would Love miss a game for violating the league’s sacred rule about staying on the bench? Could Green face recrimination for his provocation? Might Lue be fined for bashing the refs?

But in the end, here was the full list of punishments doled out in the wake of Game 1:

That’s it. Love and Thompson avoided suspensions, Lue and Green dodged fines. The series will continue unimpeded. After all that fuss, the cumulative result was Thompson forking over some pocket change.

To be clear, we’re not complaining about any of that. Green was merely being a pest, Love left the bench only to shout at the refs a few feet onto the court, and Lue’s criticisms of the officials were hardly a threat to the sanctity of the NBA. And as for Thompson’s “flagrant” contest on Shaun Livingston in the final seconds? Replays were inconclusive on whether Thompson’s elbow actually connected with the Warriors guard, and the play didn’t appear particularly malicious. Shoving the ball into Green’s face was bad, but hardly worth a suspension. In all cases, the league was ultimately right to err on the side of leniency.

Game 2 of the Finals will tip off Sunday night at 8 p.m. ET. With everyone involved in the Game 1 fracas clear to play, we’ll see whether any of the tension boils over.