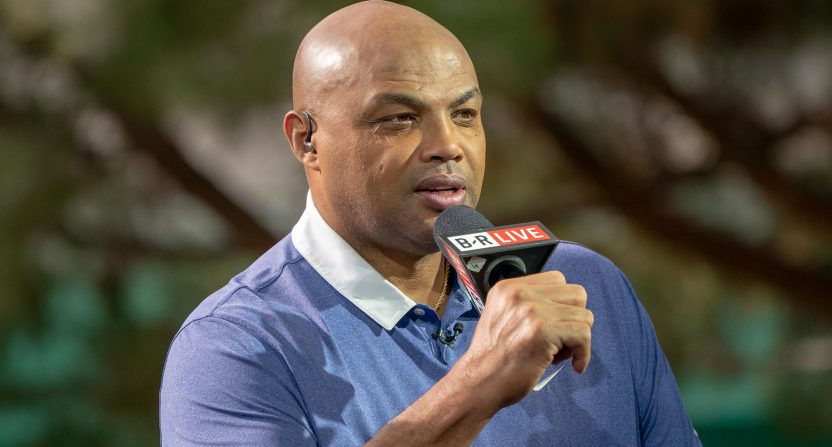 The story posted Saturday morning by Shirley Wang from NPR station WBUR’s Only a Game chronicles a genuine friendship between her father Lin and Charles Barkley. The “cat litter scientist” struck up a conversation with the basketball hall of famer and Inside the NBA analyst when the two were at a hotel bar in Sacramento.

Shirley explained that what started as a fan wanting a photo became a dinner and a conversation that lasted hours. And after meeting up over the next couple nights they were there, Barkley wanted Lin to keep in touch with him and that if he was in Atlanta, New York City or Phoenix to text him and they’ll hang out.

Their friendship became so close that when Barkley’s mother passed away, Lin went to Leeds, Alabama to attend the funeral. Barkley’s friends and family had no clue who he was or how he was connected to the family but when Charles saw Lin, it was as if they were lifelong friends.

I won’t spoil the rest of the story, it’s worth a click to go through and read it yourself. It doesn’t matter if you’re a sports fan, this incredibly emotional story touched everyone who has read this.

I’ll never forget this piece or that it led to this exchange with my wife. “Ugh, what’s making you cry now?” “A story about Charles Barkley” https://t.co/KuKta3HzC9

Oh my God, this is the most beautiful story about friendship, and it made me cry this morning. Starring Charles Barkley and the author’s dad. https://t.co/LFfjizV6c3

If anyone wants to know why I’m crying this morning, here’s @shirleyshirlw telling the story of her dad’s friendship with Charles Barkley https://t.co/IN2vObLwrp

Humanity. Noun. The quality of being humane; kindness; benevolence.

This is really such a lovely story but the best thing about it is that it won’t surprise anyone who knows Chuck. https://t.co/3JPoeDSB5n

What a great story! This really represents the best of America. https://t.co/T4BtlG6hPa

And THIS folks is all you need to know about Charles Barkley https://t.co/kaqwMGZliQ

When someone is on TV, viewers only see a side of that person. For those of us who only know Charles Barkley from what we see on TV, we see someone who likes to joke and have fun, who pronounces the word “terrible” in a way no one else does and who swings a golf club in a way I hope no one else does.

That TV persona is just a small glimpse of who Charles Barkley is. He spends a lot more time off screen than on screen. And in reality, Charles Barkley is more like the kind of person Shirley Wang describes. It’s just a side most of us don’t see as often.

Yes, Lin Wang was a fan of Barkley’s but he was different than the usual fan who wants a photo from a famous athlete. When these two met, it wasn’t just a fan meeting a hall of fame basketball player, these were the only two people at a hotel bar in Sacramento talking about their families. Two people who, while they had very different lives, were equals as people. That kind of friendship doesn’t happen very often and those two knew that. That’s why they remained so close.