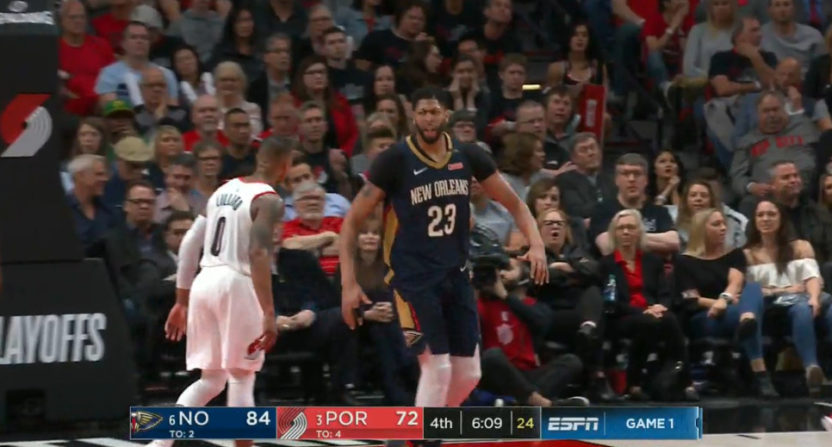 Saturday marked the first day of the NBA playoffs, and it saw the New Orleans Pelicans became the only one of four road teams in action to pick up a win. Sixth-seeded New Orleans beat the third-seeded Portland Trail Blazers 97-95 on the road despite a late attempted comeback, and one of the most impressive moments came from Rajon Rondo’s fourth-quarter lob to Anthony Davis, who threw down an emphatic one-handed slam:

The Portland comeback was on shortly afterwards, though, and the Blazers pulled within one heading into the final minute. They then forced a turnover, but Jrue Holiday came back and blocked C.J. McCollum, then drew a foul from Jusuf Nurkic. Davis then missed a three, and Nurkic rebounded it, but Rondo stole the ball but wound up out of bounds.

The Blazers then had another chance, but Damian Lillard missed the shot, and while Nurkic again almost got the rebound, Davis got it away from him and forced him to foul. That put Davis at the line, where he hit both shots to extend the lead to 95-92 with 12.4 seconds left. The Blazers then advanced the ball, and their initial attempt went off Holiday and out of bounds, but Holiday then came up with an incredible block from behind:

Davis grabbed the rebound and was fouled, and then essentially iced the game with two free throws. McCollum hit a three at the buzzer to make the final 97-95, but that was too little, too late. And that meant the Pelicans took away a road win in this series’ first game. We’ll see how things develop from here, but if further games in this series are anything like this one, they should be worth watching. And Davis and Holiday seem likely to produce more highlights.