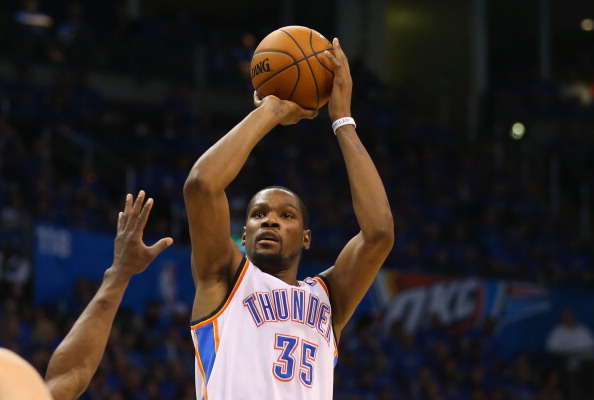 Kevin Durant has announced what team he’ll play for next, the United States Olympic team.

Once the NBA Finals are over, Durant will be a free agent, the biggest one on the market. Nobody is sure if he’ll stay in Oklahoma City, travel home to Washington D.C., move to the Northeast and sign with Boston, or maybe even join the team that beat his Thunder in the Western Conference Finals in Northern California.

But one thing is pretty much for certain now. Before Durant plays another NBA game, he will represent the United States during the 2016 Summer Olympics in Rio de Janeiro this August.

Why is this such big news? Well, Brazil is dealing with major Zika concerns that have led to many players not committing to the team and others are suffering from injuries. There’s a virtual All-Star team of NBA players not making the trip to play for Team USA.

Durant however, has always planned to play in the Olympics again for the US.

Durant played for the gold-medal US team in the last Olympics in 2012 in London. The 27-year-old led the team with 19.5 points per game while playing in a team-high 209 minutes. Durant was named to ESPN.com’s All-Olympics first team after scoring 30 points in the gold medal game against Spain.

While the forward has been committed to playing in the Rio Games for a while, there are many factors in play that could have stopped him from joining the team this summer.

For one, Durant will become an unrestricted free agent in July, the month before the Olympics. The race for his services next NBA season will be big as teams like the Boston Celtics, Washington Wizards, Oklahoma City Thunder, Golden State Warriors, and maybe even Los Angeles Lakers are expected to be involved.

As for his body, within the last two years Durant has had three different surgeries on his right foot, all of which came in a six-month span. While he was healthy during the entire 2015-2016 season, the Olympics contain a lot of traveling and a lot of extra playing time for someone who had to deal with that many surgeries.

Finally, the Zika virus outbreak in Brazi has caused some basketball players to question whether the Olympcis are worth it. Spain star Pau Gasol has stated he’s not sure yet if he’ll go.

The Centers for Disease Control and Prevention currently have Zika at a Level 2 epidemic. As a result, that means people should “practice enhanced precautions” when traveling to Brazil.

The risks and outbreak led to a large group of scientists deciding to challenge the International Olympic Committee and World Health Organization on the playing of the games.

“It is unethical to run the risk, just for Games that could proceed anyway, if postponed and/or moved.”

While the IOC and WHO responded by saying the games are still on, some players are taking the sides of the scientists who are protesting. However, it looks like Durant will still participate and that could lead to potentially other big names doing the same.