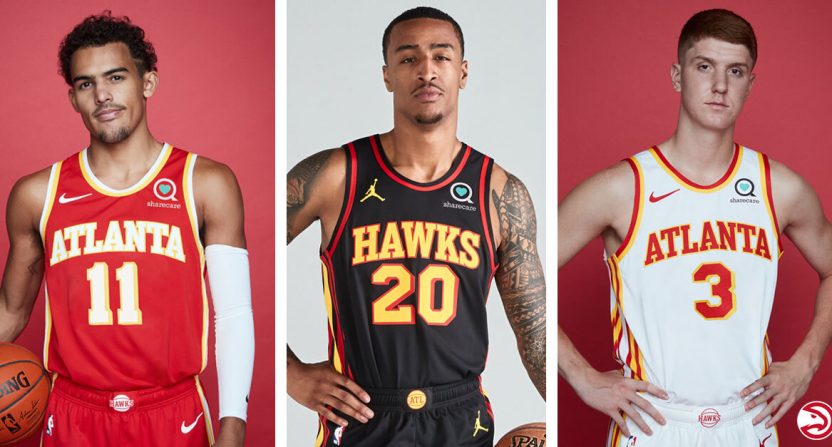 In recent years, the Atlanta Hawks had a more modern look with their uniforms. Incorporating a neon green detail in their letters and numbers, it was a subtle modern detail within their red and black standard coloring scheme. Now, the Hawks are ditching the green and their new designs have a noticeable nod to the past.

We got something new for you, Atlanta. Forever #TrueToAtlanta.

The Hawks have three distinct looks that are clean and look sharp. The Icon, and their primarily red pattern with white letters/numbers and gold trim, is a carbon copy of their jersey from the mid-70s. The Association is from a similar time, with the reverse look as The Icon.

The most modern look is from The Statement, which is likely to be the case with every team, but even that is rooted in the past. With the Jumpman on the uniform, the uniform is black with gold letters/numbers and with red trim. It’s not a design the Hawks have used but the pattern remains consistent with the overall look.

Trae Young tweeted, “You look good, you feel good… You feel good, you play good,” in regards to these new unis and while they don’t automatically make someone better, feeling good about what you’re wearing may wind up putting you in the right frame of mind to play well. The Broncos and Buccaneers won first Super Bowl right after they changed their old look uniforms. Years later, we grew to appreciate the orange crush and creamsicle designs but back in the 90s, they weren’t something people were into. Maybe the Hawks can do the same.