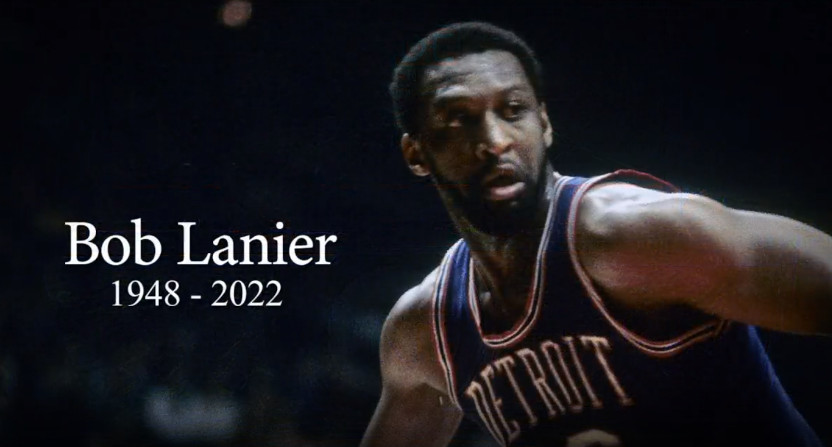 Tuesday night brought the NBA world some unfortunate news that has certainly shaken up many around the game of basketball.

NBA Hall of Famer Bob Lanier passed away at the age of 73. Lanier is revered by many as an icon in the sport and has stayed close to the game even after his retirement over 30 years ago.

Naismith Basketball Hall of Fame center Bob Lanier, one of the game's great players and statesmen, passed away on Tuesday evening. He was 73 years old.

NBA commissioner Adam Silver has released a statement regarding Lanier’s unfortunate passing, detailing Lanier’s work as a global ambassador for the NBA long after his retirement in 1984.

“For more than 30 years, Bob served as our global ambassador and as a special assistant to David Stern and then me, traveling the world to teach the game’s values and make a positive impact on young people everywhere,” Silver said in a statement. “It was a labor of love for Bob, who was one of the kindest and most genuine people I have ever been around.”

Many around the NBA world took their chance to take to social media and acknowledge both the incredible career that Lanier had (which even saw him referenced by Kareem Abdul-Jabbar in Airplane!), as well as Lanier’s character as a person.

So sorry to hear the passing of NBA Legend and Hall of Fame Detroit Piston and Milwaukee Bucks great Bob Lanier. One of the nicest and most genuine guys that I’ve ever had the privilege to know. Sending my condolences and prayers to his family during this difficult time 🙏🏾

RIP, Big Bob Lanier. 20/10 career guy. Kareem got tired of dragging him up and down the court for 48 minutes. pic.twitter.com/LZfYsP7Z1g

This man educated as a young player and I never played on one of his teams. Not one time did he not give me advice when I encountered him. An amazing person. RIP mentor. pic.twitter.com/HV4vOfBtfk

We’ve lost one of the true, literal giants of the sport. Hall of Fame center Bob Lanier was one of the pillars of the 1970s and 1980s NBA, one of the foremost lefties ever and will be missed tremendously after working in the league long after he stopped playing. #RIP https://t.co/iABPuUgwkH

Last time I saw Pistons superstar BOB LANIER was several years ago when he spent the weekend at my house as he attended my Gala. We had so much fun together over the years in Motown . I can’t sleep thinking about those memories . RIP BOB! Love u big guy . pic.twitter.com/a3ynIFGshp

The NBA on TNT crew also had a very touching moment Tuesday night while they detailed stories of their encounters with Lanier, who by all accounts was a pretty incredible person.

Lanier played 15 seasons in the NBA, spending time with both the Milwaukee Bucks and Detroit Pistons organizations. He made the All-Star Game eight times during the duration of his career. And his impact will be felt throughout the NBA community for years to come.