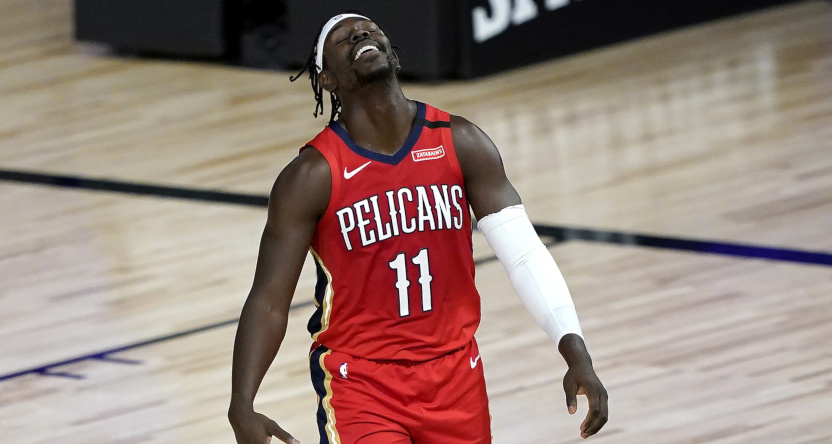 The Milwaukee Bucks made one of the bigger swings for the fences we’ve seen in a while Monday night. As per reports from Shams Charania of The Athletic and Stadium and Adrian Wojnarowski of ESPN, the Bucks are bringing in Jrue Holiday from the New Orleans Pelicans. In return, they’re giving up Eric Bledsoe, George Hill, three first-round picks and two future draft pick swaps:

New Orleans is nearing completion of a deal to send G Jrue Holiday to Milwaukee for Eric Bledsoe, George Hill and what's described as "significant" draft compensation, sources tell ESPN. Teams are still working through the picks in trade.

Later Wednesday, Wojnarowski added that the Bucks are also gaining Bogdan Bogdanović and Justin James from the Sacramento Kings in a sign-and-trade deal:

The Bucks are trading Donte Divincenzo. Ersan Ilyasova and DJ Wilson in the deal to the Kings, sources said. https://t.co/Vrho6gZQhH

Holiday (seen above during an August 6 game) has been a strong piece for the Pelicans, including earning a NBA all-defensive first team nod in 2018 (and a second-team nod in 2019). This past season, he averaged 19.1 points, 6.7 assists and 4.8 rebounds per game in 34.7 minutes per game, and he was named Teammate of the Year. So he’s certainly a nice addition for the Bucks, especially given their focus on winning now with star Giannis Antetokounmpo. And Bogdanović (who averaged 15.1 points, 3.4 rebounds and 3.4 assists in 29 minutes per game for Sacramento this season) is a solid piece as well. James, a 2020 second-round draft pick who only averaged 6.4 minutes and 2.5 points per game for the Kings this season, is more of a throw-in, but Holiday and Bogdanović give the Bucks some fun new pieces.

However, there are some concerns here for Milwaukee as well. For one, Holiday is 30, and will be 31 in June. And he’s been in the league for a long time, starting with the Philadelphia 76ers from 2009-13 then moving to New Orleans ahead of the 2013-14 season. He’s also only ever made one All-Star team (in 2013). And he’s on an expiring contract. Meanwhile, Bogdanović is 28, and he’s turned into a good contributor for the Kings, but his non-scoring totals aren’t huge. So there’s some risk there, especially when you’re giving up this many first-round picks and other pieces.

It makes some sense for the Bucks to focus on trying to win now, and Holiday and Bogdanović may help them do that. Antetokounmpo, the league’s 2020 MVP, is set to become an unrestricted free agent after the 2020-21 season, so this is the only time the Bucks are sure to have him. And a compelling performance this coming season might be important in trying to convince him to stay. And this team isn’t necessarily a long way away; they finished first in the Eastern Conference this season, and made it to the conference semifinals (falling to the Miami Heat in five games; that came after an ankle injury to Antetokounmpo in the fourth game, and Miami would go on to reach the NBA Finals).

Adding Holiday and Bogdanović to the mix the Bucks have with Antetokounmpo, Khris Middleton and more might make them even a stronger title contender. And there’s some logic to taking that kind of a swing when you already have a star like Antetokounmpo, and when you’re looking to win to try and keep him around. But there is a heavy price here in terms of the future, especially if this doesn’t work out this year and if Antetokounmpo winds up leaving. We’ll see how this works out for Milwaukee.

UPDATE: Welp, it turns out that Bogdanović hadn’t actually agreed to sign a deal with the Bucks, and will instead enter restricted free agency. It’s hard to imagine how the Kings agreed to a sign-and-trade without knowing if the player wanted to sign with the other team, but that actually summarizes the Kings quite well.

The Kings and Milwaukee Bucks had hoped to bring Bogdanovic the framework of a sign-and-trade to negotiate a Bodanovic contract with Milwaukee on Friday, but he will move into the marketplace to find an offer sheet or seek out other sign-and-trade scenarios, sources said. https://t.co/KDlBiLcaBs