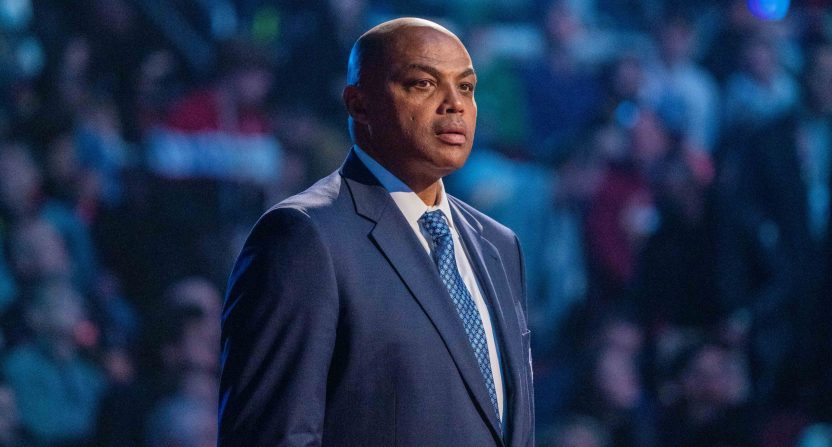 If you ask two people who the Mt. Rushmore of a given topic is, chances are you’ll get some debate. One thing that won’t be debated though is that the list — whoever makes it — will include four people. When it comes to the NBA Mt. Rushmore, Charles Barkley sees it a little differently.

"These are the most important figures as far as basketball in my opinion."

The biggest issue, of course, is that Allen Iverson was somehow omitted from Barkley’s list.

In all seriousness, the actual Mt. Rushmore has four United States presidents — George Washington, Thomas Jefferson, Theodore Roosevelt and Abraham Lincoln. A valid claim can be made that any of Barkley’s listed players belong. Unfortunately, three would have to go. Mt. Rushmore doesn’t have seven people on it.

How many faces does Chuck think are on Mount Rushmore??? https://t.co/S8gUs53KFH

Does Barkley not know how many presidents are on Mt Rushmore? https://t.co/iuD692HbAz

He knows there’s only 4 right? https://t.co/z1CIllHFe2

That's not how it works. https://t.co/nuBRjxb5e4

He does know that its 4 people on Mt Rushmore right?? 😅 https://t.co/rw9Voughmj

I swear Mount Rushmore has four people, not seven. https://t.co/j0LOiCRK6Q

What’s interesting is that Barkley went down this road because he didn’t want to name a greatest player of all time, feeling that the debate is “lazy” and that “you have to break down generations.” But if you’re unwilling to name one GOAT, you can’t then name a seven-person Mt. Rushmore.

If Barkley wanted to name the most important players in the history of the game, he could have done that without calling it Mt. Rushmore. In fact, he could have then expanded the list.

Sure, it’s tough to see old clips from the 1940s and 1950s and think that those players could even play in the 1960s, let alone the later decades. But George Mikan’s dominance caused the NBA to adapt goaltending, the shot clock and widen the lanes. That’s a huge impact on the sport.

Mikan was also a founder of the American Basketball Association. While the ABA has long been out of business, it did give the NBA four current teams. It also introduced staples like the slam dunk contest and the three-point line. And speaking of three-point lines, what about Steph Curry? While the NBA has had the three-point line since the 1979-80 season, it wasn’t until Curry hit his stride that teams began using it. He’s certainly changed the game.

Wilt Chamberlain is the only player in NBA history to average 50 points a game in a season. No other player has even averaged 40.

If we’re making Mt. Rushmore more than four people, then Mikan, Curry and Chamberlain would all belong. That doesn’t even factor in other legends like Tim Duncan or coaches like Red Auerbach. And how important have international stars like Dirk Nowitzki been to the growth of the game?

A list of most important players has essentially no maximum. A Mt. Rushmore, though, is different. Sure, cutting Barkley’s list of seven down to four would be tough. But if he’s calling something “Mt. Rushmore,” it’s a necessary evil.