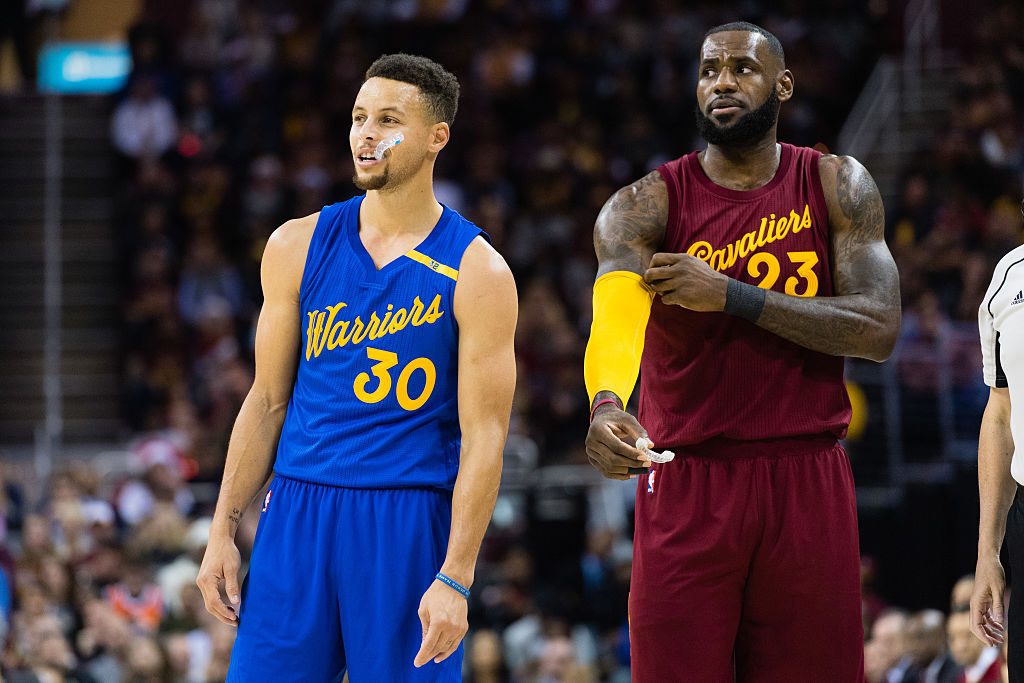 The NBA Finals rubber match everyone was waiting for is now set. After the Cleveland Cavaliers trounced the Boston Celtics on Thursday evening, they punched their third consecutive ticket to the championship round. There, they’ll meet a familiar foe, the Golden State Warriors, who have also been to three consecutive Finals.

It’s the first time in NBA history that two teams have met in the NBA Finals in three consecutive years.

This is unprecedented hegemony for the league, even in light of its own history dominated by a small collection of successful franchises. The Boston Celtics participated in 12 out of 13 Finals from 1957 through 1969. The Minneapolis/Los Angeles Lakers even played in seven of those matchups — but never three in a row. L.A. and Boston faced off in four of five from 1962-66, and 1965-69. They’d play three more times in the 1980s, then took a break until playing two out of three times from 2008-10.

The Lakers have even dominated stretches on their own, without the Celtics’ involvement. L.A. won three straight titles from 2000-02, then lost the 2004 championship to the Pistons. From 1980-89, the Lakers (eight) and the Houston Rockets (two) were the only Western Conference teams to make the Finals.

The other ruling franchises in league history have had their own dominant solo runs as well. Michael Jordan’s baseball retirement was likely the only thing preventing the Chicago Bulls from winning every championship from 1991 through 1998 (they won six, interrupted by two Rockets titles smack in the middle). Over in San Antonio, the Spurs have altered the entire thinking around what a dynasty looks like. The Spurs have never won two straight, but they’ve won five in six tries from 1999 through 2014. San Antonio was also knocking on the door nearly every other year in between.

So again, this sort of two-team dominance is unprecedented for the NBA, and based on the league’s current structure, it doesn’t appear to be going away anytime soon.

Bill Halsley had an interesting read on Deadspin last week, which pinpointed exactly how we got here (a two-team league and a fairly uneventful playoffs leading to their Finals rematch). The basic idea: the NBA’s push for parity has left too many good teams, but not enough great ones. It’s also stopped all that many teams from being downright dreadful either. What’s left are a bunch of relatively evenly-matched franchises, all striving toward third-place behind two superteams.

Those superteams’ formation, it turns out, was the direct result of that parity, too. As Halsley says:

“In turn, all these rules do is place the onus of team-building onto the players themselves. Great players want to win and know that the way to win is by playing with other great players, so the kinds of superteams the league is so afraid of will never go away. But under the rules currently in place, instead of teams going out and paying an assortment of great players what they’re worth, it becomes the players’ job to create an environment conducive to amassing a couple stars, usually accomplished by the players deciding to take less money than they’re entitled to.”

There have been countless takes on superteams since the Kevin Garnett/Paul Pierce/Ray Allen Celtics were formed, and even more during and after the “Big Three” Miami Heat. But this is one that flips the idea on its head. The superteams became a necessity for players if they hoped to compete for championships. This generation’s players want to get paid, sure. But they’ve allowed that to take a backseat to winning.

The two current superteams have formed differently. Golden State needed the right coach to coax the right results out of a team of larger homegrown players, then eventually became a superteam by way of its nucleus — Steph Curry, Klay Thompson, Draymond Green — all finding their best game within that system. The complementary pieces came aboard the same way they did for the Heat at one point, at a discount chasing a title. Adding Kevin Durant was almost similar. His talent level is greater than the reserves the Warriors have added for the veteran’s minimum. But his motives for going there were the same.

LeBron James did the whole superteam thing before, with Miami, after years of Cleveland failing to put anyone of note around him on the roster (and then watching other squads win championships). He could’ve continued on with the Heat if he’d chosen to, rotating in new pieces around him to over time. But as Dwyane Wade and Chris Bosh faltered and aged, it could’ve eventually looked a lot like his early Cavs days.

This time around in Cleveland, he found a situation where an owner (Dan Gilbert), was desperate for the same thing he was (winning), and was willing to give him the comeback story to pair with it. James could’ve told any team to go trade for Kevin Love. He could’ve told any GM to trade for Kyrie Irving or a reasonable substitute. Those aspects of this superteam aren’t unique to Cleveland. The aura James has created around the Cavs, being his hometown team, is.

When these superteams meet once again, there will be little at stake beyond another crack at owning the title of “NBA’s best” for the next 12 months. Despite the difference in how they came together, the Cavs and Warriors are still equal parts homegrown talent and ruthless engineering via free agency. They’re the natural result of a push toward parity in a league that’s never once demanded it until very recently.

In an NBA that took decades to broaden its appeal after a hegemonic start with the Lakers and Celtics, it’s almost fitting to see things come all the way back around like this. These last 10-15 years or so have proven that the league doesn’t need a singular talent like a Michael Jordan to survive. But in the process, they’ve proven just how ill-equipped its franchises are to build great teams, given that truth. LeBron and Steph can’t play basketball forever, of course. But it may feel like forever if other franchises can’t break through in the near future.