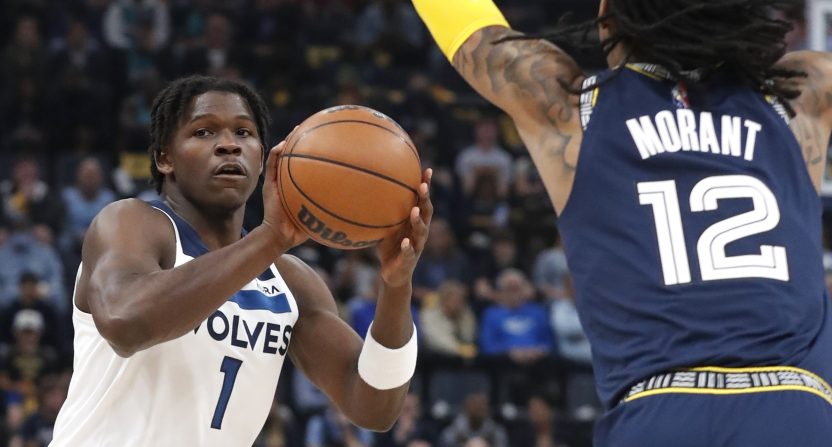 All of us have mental lapses.

Fortunately, they don’t happen in a crowded arena, in a televised event.

But D’Angelo Russell’s brain fart Wednesday night caught everyone’s attention. The Minnesota Timberwolves point guard was supposed to be in the game against the Phoenix Suns as they started a second-quarter possession.

Yet Russell was missing in action, waiting at the scorer’s table to check in. The Suns, playing with a 5-on-4 advantage, took a 3-pointer, missed it, grabbed the rebound, then Torrey Craig knocked down a 3.

Russell could be seen running down the court to join his undermanned teammates just as Craig hit his shot.

This is an all-timer! Russell not realizing he's supposed to be on the court, Suns play a possession 5-on-4, make a 3-pointer. #Timberwolves pic.twitter.com/3hrT51FGKO

This is not a good look for a team that entered Wednesday 5-6, and it’s doubly bad for Russell, who has taken heat for the team’s offensive struggles. Fan site canishoopus.com notes that, “There are a lot of reasons for the offense’s issues, but they start with the man who runs the show. D’Angelo Russell’s … style has clashed with that of the Wolves and their other personnel, resulting in a disorganized attack that is perennially stuck in the mud.”

The site also notes that the Timberwolves have been a more efficient offense without Russell on the court. Wait a minute, don’t give him any ideas.

NBA fans who saw the video said the incident is a sign of a team with big problems.

How many coaches and players does it take to realize you only have 4 players on the court.
This doesn't happen in Elementary it Middle School ball.

I’m more shocked that the announcers didn’t even realize we only had 4 on the court for that whole possession, then d lo not being on the court

Just unwatchable basketball. Finch will be lucky to make it until the All-Star break.

D’Angelo Russell has to go. Actively hurting the team.

The announcers don’t even have a clue. D’Angelo Russell runs on the court 20 seconds into the possession like it’s a hockey game & they don’t bat an eye 😂😂