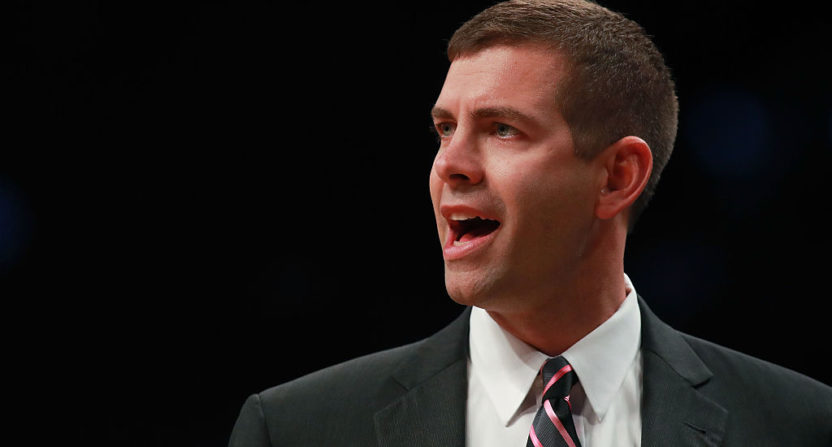 Brad Stevens still looks like a boy wonder. Even though he’s 41 years old, you expect him to be carded for alcohol purchases. His youthful face is another reminder of how quickly the former coaching prodigy has climbed the career ladder. Stevens got Butler to the 2010 Final Four at the age of 33. Three years later, he was named coach of the Boston Celtics.

Stevens is a very good coach. He’s won a lot of games both in college and in the NBA by maximizing all available talent. He’s also existed in an ideal spot. The best way to get noticed in life is to exceed expectations. Stevens has built a career out of doing so.

“College coaches have gotten a bad rap because everybody says they can’t make the transition (the the NBA),” North Carolina coach Roy Williams said. “Well, Hubie Brown was pretty good and Brad Stevens is pretty good. A lot of the guys get bad jobs, but the good thing with Brad is that the Celtics weren’t that good when he got there, but they believed in him, trusted him and gave him time. He’s as good as anybody.”

He has an uncanny knack for overcoming odds no matter how daunting. He’s Coach Ethan Hunt. Last season, Stevens survived the absence of his two best players: the first-game season-ending injury to Gordon Hayward and the mid-season loss of Kyrie Irving. Stevens squeezes the last drop of excellence out of anything.

But for possibly the first time in his career, Stevens will have to deal with real expectations. Hayward and Irving, presumably healthy, join a team that won 55 games without them. The biggest obstacle, LeBron James, is with the Lakers in the West. Boston squandered a 2-0 series lead in the Eastern Conference Finals to James and the Cleveland Cavaliers.

It’s NBA Finals or bust for Brad Stevens. Boston is the odds-on favorite to win the East.

The NBA is the most predictable of the major sports, and it’s become even more so in recent years with Golden State facing Cleveland for the past four years. This year, Golden State vs. Boston seems the most likely Finals matchup, but it’s not clear-cut.

Toronto added Kawhi Leonard, who if he returns from injury to being a top-five player could threaten the Celtics. The Philadelphia 76s might have the league’s best 1-2 punch of young players in Ben Simmons and Joel Embiid. If those two continue to improve and if they get anything at all from Markelle Fultz, Boston should be concerned.

Stevens was hired by Danny Ainge to bring the Celtics a championship. Another loss to the Eastern Conference Finals ain’t going to cut it. Ainge has made mostly the right moves since joining the Celtics front office in 2003. He acquired Kevin Garnett and Ray Allen to win the 2008 NBA championship. He was also wise enough to ship out aging veterans Paul Pierce and Garnett to accumulate assets. All that dealing has been building toward this season. Boston has enough star power and depth to return to the NBA Finals for the first time since 2010.

If a healthy Boston doesn’t reach the NBA Finals, there will be only one place to put the blame: Stevens. This will be his sixth season. Every year the Celtics’ playoff winning percentage has improved. He’s never had a team this talented. It will be interesting to see how he puts the pieces together. One of his biggest challenges will be figuring how to mesh the veterans with the youngster who grew up.

Tatum finished third in the NBA’s Rookie of the Year voting. He was arguably the Celtics best player in the second half of the season. In the playoffs, Tatum averaged 18 points, while shooting 46.6 percent. Rozier was second on the team in playoff player efficiency rating (17.3) and was Boston’s third-best postseason scorer (16.5 points per game).

It will be difficult for them to match those numbers with Irving and Hayward back in the mix. Finding a way to make this work will be Stevens’ responsibility – and a considerable challenge.

Irving could be a particularly thorny issue. He likes the ball. One of the supposed reasons he forced a trade from Cleveland was that he was tired of sharing the credit with LeBron. Last season, Irving was eighth in the NBA in usage rate (31.03) and ninth in PER (24.96).

Given his high production, how much is Irving willing to sacrifice touches? Irving’s chronic bad knees will probably cause Stevens to rest the All-Star guard and limit his minutes per game. That should allow Rozier to get some run.

Stevens on Rozier: “I just have to figure out how to get him as many minutes as possible. He’s tremendous.”

However, you also have to factor in Kyrie’s pending free agency for the summer of 2019. Irving will be out to prove that he’s as healthy and productive as possible.

Over the course of a long NBA season, Steven will have ample time to figure it out. What he doesn’t know right now is how much better his competition will be.

The Sixers look to be the strongest threat. Stevens got kudos for stopping NBA rookie of the year Ben Simmons. In the playoff series, the 76ers were minus-63 when the point guard was on the court. If Simmons develops any kind of consistent jump shot, Philadelphia will be better.

The Raptors swapped out chronic playoff underachiever DeMar DeRozan for ex-NBA Finals MVP Kawhi Leonard. But Leonard sat out most of last year with the most mysterious quad injury in sports history. If he’s healthier, Toronto will be better.

If that is so, Stevens will need to be better. We’ve seen what he can do with limited expectations. Let’s see what Stevens can do with substantial scrutiny.