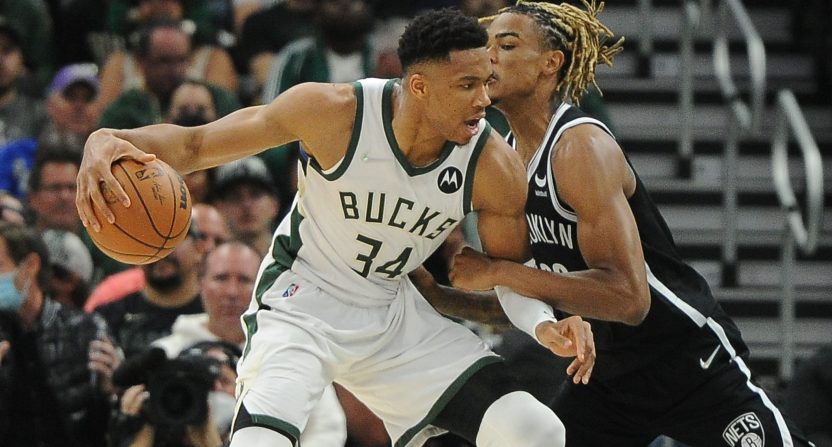 Tuesday night’s game between the Milwaukee Bucks and Brooklyn Nets served as the NBA 2020-21 NBA season opener, and it also served as Ring Night for the defending champion Bucks (and the rings are amazing). The Bucks and their fans already had plenty of reason to celebrate with the pregame ceremony, and then Milwaukee walloped the Nets 127-104 in a battle of Eastern Conference heavyweights.

As usual, it was 2021 NBA Finals MVP Giannis Antetokounmpo that led the way for Milwaukee, in pretty unstoppable fashion. Giannis had 32 points (12-of-25 from the field, 7-of-9 at the line), 14 rebounds, and seven assists, leading the Bucks in all three categories.

Giannis throws down the and-one jam after a bullet pass from Khris Middleton! 🔥🏀🔨 pic.twitter.com/4skRoOQml0

It's too easy for Giannis.

Giannis with a ridiculous block! It leads to a Bucks three-pointer from Pat Connaughton. 🏀🔥 pic.twitter.com/fRrVfzvZjg

Giannis putting together games like this against Brooklyn is a continuing theme for the Nets.

Including the playoffs, Giannis has recorded 30 points and 10 rebounds in 6 straight games vs the Nets.

Over the last 40 seasons, the only player with a longer streak vs a single opponent is Shaquille O'Neal vs the Pacers in 2000 (7 straight). pic.twitter.com/quTDMN5CqL

So, in order to get by the Bucks in the Eastern Conference playoffs, the Nets better find a way to slow down Giannis even slightly- or at least shut his teammates down. Khris Middleton chipped in 20 points and nine rebounds, and Pat Connaughton had 20 points off the bench.

This was all with Jrue Holiday only playing 18 minutes — in which he had 12 points on 5-of-7 shooting from the field — before exiting with a heel contusion. It seems he’s fine, which is great news for the Bucks.

It was just one night, and *a lot* can change between now and next June (as the Holiday injury scare shows), but the Bucks certainly looked like a team highly capable of making a run at another NBA title.