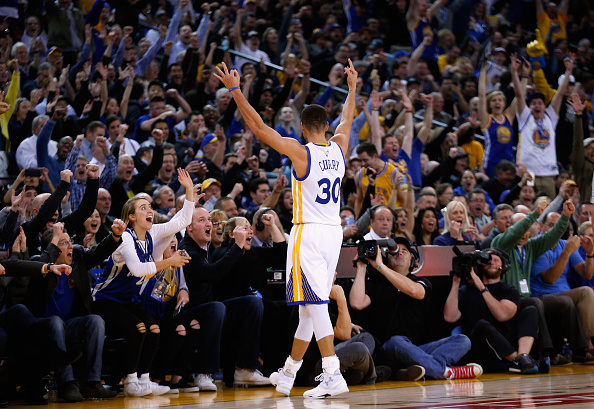 The supposed game of the season turned out to be just another blowout win for the Golden State Warriors.  That’s OK, though, since it gives us a clear view of the NBA’s hierarchy. Before, the Warriors and the Spurs were jockeying for top spot, though neither could claim it because they hadn’t met. Both sides had a legitimate claim. The Warriors were the defending champions, owners of a blistering offense and an unthinkable collection of stars. The Spurs had a historic defense, the ageless wonder of their big three, Kawhi Leonard ascending to superstardom, and LaMarcus Aldridge.

In the end, it wasn’t even close. Stephen Curry couldn’t miss, Draymond Green and Andre Iguodala picked apart the Spurs with precise passing, Shaun Livingston found the tiniest hole in their defense, then forced his way through over and over until it became a gaping maw. It was a beatdown, pure and simple. Even if the regular season never means much to the Spurs, this loss surely has to mean at least something to them. Tim Duncan’s absence alone cannot account for their defensive miscues and wildly uncharacteristic turnovers.

If only there was some way to rank them…

The process is taking its time.

Really glad they’re so focused on developing their young talent and not giving Kobe Bryant the going away parade he never wanted.

Young, improving, and a ways to go.

One of the season’s most promising teams have turned into one of the most disastrous.

The Bucks have put out a search for last year’s defense. If you can find it, please contact them immediately.

So, if typical-hardass Scott Skiles wasn’t the answer to unlocking at least some of this team’s competitive fire, who is?

Mike Malone has the Nuggets playing hard and heading in the right direction. They just won’t meet their destination anytime soon.

Anthony Davis’ ascension has been put on hold for a year, apparently. They’re playing better, but they may have dug themselves into too big of a hole.

Maybe this season’s most disappointing team.

They were fun and surprising for the first 10 games of the season, then they remembered they’re a rebuilding team that really had no business being in the playoff conversation at all. But they’re still kinda fun!

How crazy is this: The Hornets would be tied for eighth in the Western conference. They’ve stumbled since their hot start, falling from as high as fourth to now 10th in the East. Michael Kidd-Gilchrist’s return could be the steadying force they need.

it’s hard to live up to lofty expectations when your entire team seems to be completely decimated by injuries all the time.

Maybe they make the playoffs this year (they’re currently 9th in the East), maybe they don’t. But Kristaps Porzingis is contributing at a higher level than anyone expected this year, so whatever else happens is just found money.

Injuries and inconsistencies constantly haunt this team. Chris Bosh is back to his All-Star self, and Dwyane Wade seems as healthy as ever. Still, this team just can’t seem to find a steady rhythm.

Andrew Drummond’s free throws are as much of a concern for the Pistons as his rebounding and overall immunity to defenses are to opposing teams.

This is not a drill. The Kings are in the playoff picture. DeMarcus Cousins is playing the best basketball of his career, Rajon Rondo is not only back to form, he’s learned how to shoot, and they’re getting major contributions from players like Omri Casspi and Willie Caulie-Stein. If they can maintain this effort for the rest of the season, we’ll finally get #PlayoffBoogie.

It wasn’t too long ago that we were burying the Rockets and leaving them for dead. While they’re still not wholly a good team yet, they’re good enough to currently be in the playoffs.

Paul George is playing like an MVP candidate, CJ Miles is enjoying a career year, and Miles Turner looks to be one of the steals of last summer’s draft. The new-look Pacers aren’t quite the force of yesteryear, but they’ll be, at the very least, a team no one wants to play in the playoffs.

Take one (1) star-less team with several high-quality players, add one (1) star coach, let it sit in the oven on 425 for about 25-30 minutes and voila, you have the Boston Celtics.

Rick Carlisle continues to weave his warlock magic, turning a team comprised of players that are either A) old B) still recovering from what should have been devastating injuries or C) bad into a playoff roster.

The Grizzlies were in a similar state to the Houston Rockets earlier in the year, with some calling for a massive fire sale. Yet, here we are, and here are the Grizzlies, a solid fifth in the West and playing their typical grit-n-grind style of basketball.

I’m still not sure they’re actually good, but they’re fourth in the West, so they’re at least really, really good at pretending to be good.

They’re like the Clippers of the East. You just know they’re a mediocre team, but since their record says otherwise, you have to give them at least a little credit. With as many issues as this team has already had this year, from injuries to chemistry, don’t expect them to go far in the postseason.

They’re not the 22-straight-win team of last season, but they’re still damn good. Much of that is thanks to the continued emergence of Kent Bazemore, who is going to get paid next summer. Bazemore filled in admirably last season for Thabo Sefolosha, but now he’s a legitimate starting two/three in this league, and one of the better two-way position players at those positions, to boot.

Being second in the East is no longer a set up for a joke. The Raptors are a very, very good team, thanks in large part to skinny Kyle Lowry and aggressive-as-hell DeMar Derozan (these two also happen to have the best bromance in the league). Like the Thunder, if things improbably break right for the Raptors, they could find themselves in the Finals.

For all of the Warriors and Spurs’ undeniable greatness, here sit the Thunder, poised to win 60 games. Kevin Durant has been stellar, as has Russell Westbrook. Their supporting cast obviously isn’t at the level of the other elite teams, but it’s good enough. Still, despite all of this, they’re flying way under the radar. Maybe they’re not good enough to be favorites, but if somehow, some way, things break right, they’ve got the pieces to win it all.

Tyronn Lue wants to play faster. LeBron James has already said that’s not really his thing. This is going to work out great. Promise. Just you wait.

Let’s not diminish the Spurs, though. This is a team that, since their first title, has never, ever played for the regular season. They may be putting up historic numbers, but that is totally besides the point, at least for them. All that matters is that, by the time the playoffs roll around, they’re healthy and operating at peak efficiency. The Spurs will look at the Warriors loss as a litmus test for how far they need to go – not measuring themselves against the Warriors, but measuring themselves against their own ideals.

Look, a late-January victory over the Tim Duncan-less Spurs really doesn’t absolutely ensure a repeat title for the Warriors. But it is somewhat telling nonetheless. The Warriors didn’t miss a beat and hardly missed a shot during their rout of the Spurs. Everything that makes them such an unstoppable force was on full display, from Steph Curry’s ridiculous range and body control, to Draymond Green’s elite versatility, to their terrific bench.

When the Warriors play as they did against the Spurs, there’s simply nothing a team can do. They are futility incarnate, an unstoppable force for which there is no immovable object to meet them.