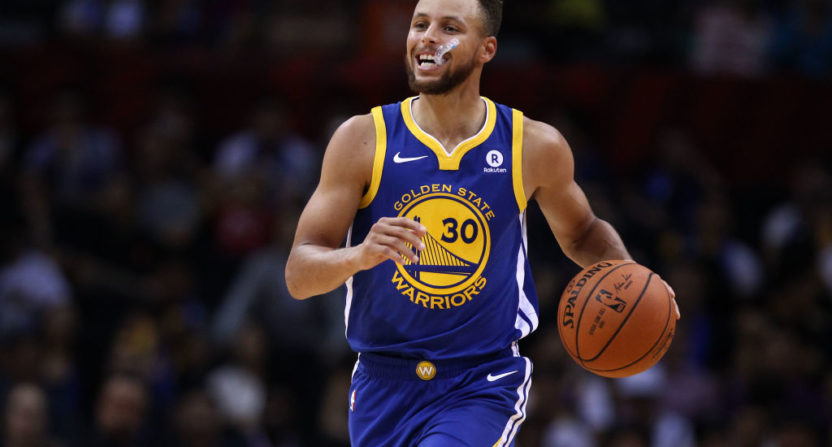 The Golden State Warriors are in their fourth straight year of running the league, blown 3-1 Finals lead notwithstanding.

Their playoff spot is basically assured, and having already won 73 games in a season, Steve Kerr’s team seems content to focus more on peaking for the playoffs, both in terms of health and performance. That means not caring about the top seed in the West, or having the league’s best record. And it means some nights aren’t going to feature the all-out Warrior blitz.

One side effect of that lack of all-out, all-the-time mentality, though: Vegas has a really hard time setting good lines.

Doug Kezirian wrote about the phenomenon for ESPN.com:

“It’s a headache,” professional bettor Erin Rynning told ESPN. “You do all this research, and you want to think you’re going to get 100 percent effort. That’s the frustrating thing with the Warriors. They are bored. They have bigger fish to fry.”

Statistically, the Warriors are among the NBA’s most unpredictable teams this season. On average, their final scores land 10.5 points away from the point spread, according to Rob Nelson of ESPN Stats & Information.

“The one-seed means nothing [to them],” Westgate Las Vegas SuperBook head NBA oddsmaker and manager Jeff Sherman said. “The regular season is the preseason to these guys.”

Golden State began this year by covering just one of its first seven games. Following that, it covered six straight, only to lose the next five against the point spread. The Warriors have lost twice outright as double-digit home favorites.

It makes sense, when you think about it. The Warriors are absolutely one of the best collections of talent in NBA history, matched with a perfect team system and a great coach. As we saw in 2015 and 2016 (again, pre-Durant) when they want to, they can win just about every game, but it’d be at the expense of possible long-term reward. Other teams, even other good teams, don’t have the luxury of not caring about playoff seeding, or even making the playoffs; every game matters. It doesn’t for the Warriors, but you also never know when those nights are going to happen; it’s not like Golden State has to ramp up many gears in order to win games.

But for oddsmakers, who are trying to even out the money, it’s a conundrum, because betting against Golden State is a tough proposition, even when they’re laying a ton of points. They’re a team designed for blowouts.

Professional bettors typically target heavy underdogs facing this type of a disinterested team. But no ticket is safe with the peak Warriors lurking, as Mavericks backers painfully learned on Thursday night. Plus, Golden State has already set an NBA single-season record this season, rallying to win from two halftime deficits of at least 20 points.

And their ability to break the game is affecting live betting as well:

“They can bomb for a couple minutes and rip off a 14-0 run,” one longtime professional bettor told ESPN. “It throws off the market.”

Kezirian’s entire piece is excellent, especially the section on how bookmakers set overnight odds for games while factoring in stars that are injured or sitting out for other reasons.

Essentially, the gambling system as we know it is just as unprepared for a team like the Warriors as the rest of the NBA has been so far. That’s almost comforting, in a way.