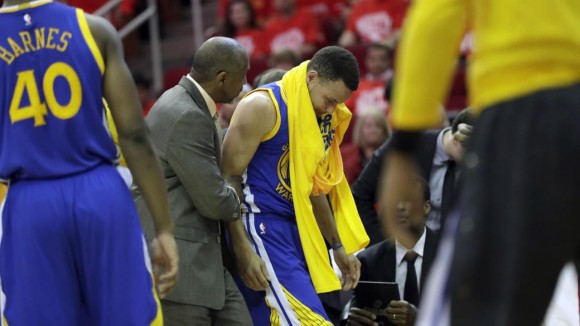 All of the excitement around the Golden State Warriors’ fabulous season, and all the predictions about where it would lead, had a caveat: “Unless Steph Curry gets hurt.”

Depending on when you read this column, you might already know the extent of the injury to his right knee, suffered when he slipped on a wet spot on the Toyota Center floor right before halftime of Game 4 against the Houston Rockets.

Before we talk about what this means for the Warriors and for Curry, I feel a need to address a topic that is hovering over this situation: “Curry has now been hurt twice since the playoffs started, so this obviously means the Warriors blew it going for the Chicago Bulls’ record for wins.”

Both of these injuries, especially the most recent, were freak occurences. Rockets center Donatas Motiejunas and teammate James Harden got tangled up running down the floor, and Motiejunas hit the deck and slid about 25 feet. Curry was tracking the ball, and when he tried to change direction his plant foot went into the slick left by Motiejunas’ slide. His left foot shot out from under him. This transferred his weight to his right leg at an awkward angle and he fell, twisting his right knee.

I will say this about injuries in general. The human body is meant to flex and distribute stress. The fact that Curry’s recently injured right ankle was taped up and braced reduced the ability of that joint to bend and take pressure off the knee, and may have had an impact on the severity of the knee injury. Yes, I did stay at a Holiday Inn Express last night.

Back to basketball. Since the Warriors won Game 4, and there are two off days before Game 5 at home in Oakland, they have a chance to catch their breath and figure out what to do after they get the results of Curry’s MRI. You have to think Golden State could win Game 5 at home without him, and depending on whether Portland can squeeze another game or two out of its series with the Los Angeles Clippers, Curry could have a week or so to get that knee ready.

That’s the rosy scenario at this point. However, like most people who follow the Warriors, I have now entered a different mode of thought: “Can they win without him?”

I don’t mean the Clippers series, I mean the whole thing.

It’s certainly within the range of possibility that Curry sustained ligament damage in that knee, thereby requiring surgery, or at least extended rest and treatment. So what happens then?

Rockets coach J.B. Bickerstaff was asked a question after Game 4 about the Warriors’ depth. He said the Warriors “have guys who put their own talents on the back-burner for the good of the team, but when it’s called upon, they can still go to it.” I think he was talking about Andre Iguodala, who took over in the late third quarter of Game 4, and Shaun Livingston, who does not look like anyone’s backup point guard. 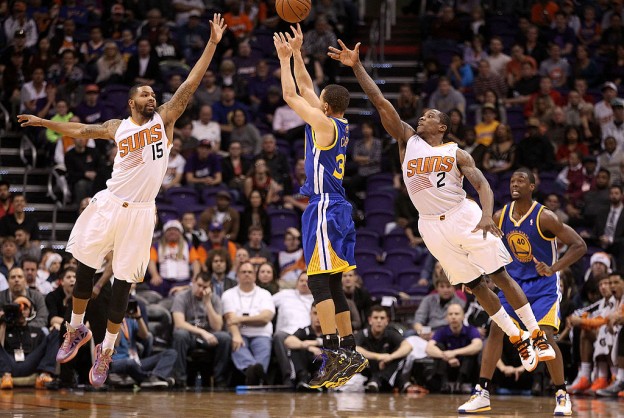 It would be foolish to say that the Warriors will be in the championship mix without Steph Curry. I’ve heard comparisons to the Cavaliers last year, but while Kyrie Irving and Kevin Love are talented players, neither has been the MVP once, let alone twice. Most savvy basketball people know that for everything those two would have given the Cavs on offense in last year’s Finals, they would have been carved up on the other end of the floor.

Curry led the league in scoring this year and also led the league in steals. He averaged almost seven assists per game. He is irreplaceable. Draymond Green was told that most people would write the Warriors off if they lost Steph for the season, and Green said, “Without Steph, I think I would write us off, too.” Green quickly shifted gears to talk about how competitive his teammates are, and we’ll see how far that gets him.

Green also very plainly described the difference on the floor. He said the experience they’ve gained playing without Curry has taught them that they “need to play for singles, not home runs. Our margin for error is much less without him in there. If we make the easy play, we think we can beat these guys.”

That is certainly true of Houston, and I think the Warriors also would beat the Clippers without Curry, although it wouldn’t be a four- or five-game series. San Antonio, with its size and length, presents problems only a great player can overcome, and that’s where this ride may end if this MRI comes up snake-eyes for Golden State.

Brent Barry was a guest on The Dan Patrick Show early Monday morning, and he said (8:19 mark), “I can’t believe that with the way the next round was shaping up in the Western Conference, Steph Curry is the guy who’s hurt. It takes a little out of it for me.”

I have to agree… if the injury is serious enough. On one hand, the pursuit of the championship could now be wide-open, and even if you might favor a more cautious approach to this topic, the title chase is certainly different. The ground has undeniably shifted relative to the start of the NBA Playoffs nine days ago. The Warriors beat San Antonio three times out of four this season, including once on the Spurs’ home floor. They beat Cleveland home and away, embarrassing the Cavs in their own building. There is no doubt in my mind the Warriors would have won the Finals in fairly convincing fashion with a full roster.

In a way, then, the NBA and its television partners stand to benefit from the new Curry-less landscape. But in a bigger way, they don’t. Steph Curry moved the TV needle. He was attractive to non-basketball junkies, the people that are needed to really make a sporting event cross over into pop culture. Without him, we’re left with stars (LeBron, Durant, Westbrook, and various Clippers and Spurs) who have been around for years and who were eclipsed by Curry’s magnificence this season.

One more thing: I’ve already heard people say that if Curry’s out for the year and the Warriors don’t win the championship, it casts a shadow over their season, much as losing the Super Bowl affected the way we view the 18-1 New England Patriots in 2007. I completely disagree.

When the league MVP goes down, it changes the conversation. They still belong in the discussion about the greatest teams of all time. No team which won 51 games ever improved to 67 wins, as Golden State did last year. Only one defending champion ever improved by six games, as the Warriors did this year, and it was the Bulls going from 61 to 67 in 1992. The 2016 Warriors have done over a dozen things no other team has done, and they, with Steph, are great.

We’ll find out how long they have to be without Curry, and we’ll find out during that stretch of time what they are – and what they can still become – without him.