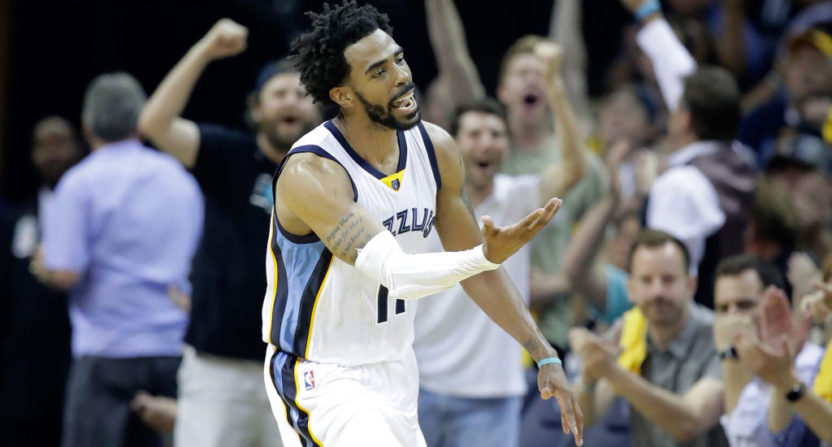 During the NBA’s so-called “dead period” from late July to early- to mid-August, an annual tradition of writing off the Memphis Grizzlies has emerged. That’s continued this summer.

But each year, the Grizzlies have endured, persevered and defied those dire predictions, reaching the playoffs for seven consecutive seasons despite lottery predictions for Memphis over the past couple of summers.

Take ESPN’s annual summer projections, for example. After the 2015-16 season, when Memphis made the No. 7 seed at 42-40 despite being beyond ravaged by injuries — the Grizzlies used the most rostered players during a single season in league history) — ESPN projected the Grizz to win just 39 games for the 2016-17 season.

Memphis outpaced those expectations, winning 43 in David Fizdale’s first year as head coach and the “take that for data” squad gave San Antonio a good run in the first round of the NBA Playoffs. This summer, ESPN projected Memphis to win 34.6 games and finish 12th in the Western Conference.

Will this be the year that the Grizzlies take that big step back and finish in the lottery, subsequently enduring calls throughout the season to tank or even blow it up? There’s clearly less certainty and continuity with these Grizzlies than in years past, aside from Marc Gasol and Mike Conley, who will be 32 and 30 years old, respectively, when the season begins.

Key veteran rotation cogs Zach Randolph and Vince Carter left for Sacramento, coached by former Memphis head man Dave Joerger. Two other integral parts to the team, restricted free agent JaMychal Green and unrestricted free agent Tony Allen, are still in flux. The quartet of Randolph, Carter, Green and Allen were third through sixth in minutes played per game and win shares on the Grizzlies last season and combined to average 40.1 points per game for a team that only averaged 100.5 per contest, 29th in the league.

The competition in the Western Conference got more stiff as well.

Division rival Houston added Chris Paul, Oklahoma City acquired Paul George, last year’s ninth-seeded Denver Nuggets signed All-Star forward Paul Millsap, and Minnesota brought in Jimmy Butler and Jeff Teague as it looks to leap into the conference’s upper echelon. Utah and the L.A. Clippers will probably take a step back after losing Gordon Hayward and Paul, respectively, but they’re still threats to make the playoffs, while New Orleans will be an intriguing team to watch in the first full season of the Anthony Davis-DeMarcus Cousins experiment.

In short, Memphis will have a less talented, more uncertain roster just as the West has become as deep as it’s ever been.

Green and Allen may ultimately return to the fold for next season, but with exactly two months until the NBA’s regular season begins (shout-out to the earlier start this year), the potential replacements for this departed group don’t exactly look promising.

Ben McLemore, just 24, shot 38.2 percent from three last season for the Kings, but had a sub-10 PER — a fringe roster player’s number according to Hardwood Paroxysm’s handy guide — and played poor defense. McLemore ranked 65th out of 93 eligible shooting guards last season, according to ESPN’s defensive Real Plus Minus (RPM) metric. Tony Allen, conversely, finished second among shooting guards in DRPM. McLemore then proceeded to break his foot while playing pickup ball over the summer, costing him three months and the chance to really build off his best shooting season.

Then there’s the other big offseason signing for the Grizzlies, the injury-prone but versatile Tyreke Evans. Evans is just 27, but only played a combined 65 games over the last two seasons, split between New Orleans and Sacramento. He can shoot the three well and handle the ball at times. He also showed he was more than a capable defender last season, finishing 24th — two spots ahead of Carter — in DRPM out of the eligible shooting guards.

Besides the additions of McLemore, Evans and rookies Dillon Brooks and Rade Zagorac, Memphis is going to have to rely on several players who either missed significant time from injury or players who will have to take on much more responsibility and significantly more rotation minutes.

That list of players undoubtedly begins with Chandler Parsons. His first year of a four-year, $94 million contract was a massive disappointment. He was limited to just 34 games, all starts, with knee problems, and averaged a paltry 6.2 points per game. He shot 33.8 percent from the field and 26.9 percent from three in just under 20 minutes per contest. Memphis’ current over-reliance on Parsons returning to his healthy and efficient form is likely a major factor in ESPN’s 34-win projection for 2017-18.

Another chronically injured player Memphis would greatly benefit from is big man Brandan Wright. Over his first two seasons with the team, Wright has played a total of 40 regular season games. Wright is one of those players who’s become a tease, because he’s such an affective player when healthy, someone who can shoot over 60 percent from the field, rebound and block shots. With Randolph gone and Green’s situation uncertain, Memphis could really use a healthy, consistent player who fits Wright’s exact skill set.

Two young Grizzlies who are well-equipped to thrive with more minutes are forward James Ennis and shooting guard Troy Daniels. Ennis shot 45.5 percent from the field and 37.2 percent from three in 23.5 minutes per game last season, while averaging four rebounds and finishing 17th among 70 small forwards in DRPM.

Daniels shot 38.9 percent from three on 5.3 attempts per game, and should be shooting even more. Memphis outscored its opponents by four points per 100 possessions with Daniels on the floor last season, third on the team to Conley and Carter last season, and minus-0.9 per 100 when he was on the bench, per NBA.com. Fizdale should be playing Daniels for several more than the 17.7 minutes per game he logged last season.

There’s no doubt that there are far more questions than answers for this Memphis Grizzlies team at this point during the dog days of August. Green and Allen could still play for them in the 2017-18 season, but with so many uncertain parts on this team and an improved West, this could finally be the season where the projections and predictions are right and Memphis finally takes the big step back that has long been predicted for this franchise.