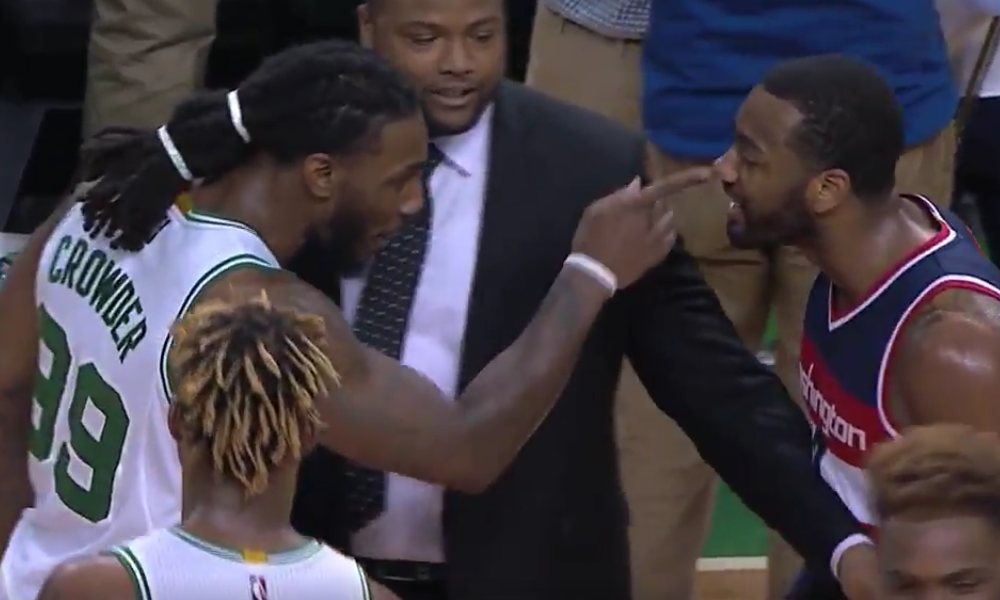 Things got a little heated after the Washington Wizards’ 117-108 loss to the Boston Celtics Wednesday, with Boston forward Jae Crowder and Washington guard John Wall starting a confrontation.

The two players started jawing at each other, and Crowder then poked Wall in the nose and got slapped for his trouble. That led to players on both teams getting mad and trying to get to each other. Here’s the video of their post-game confrontation:

Crowder said afterwards he didn’t know why reporters were asking about it:

There have been several confrontations between these teams over the last few years, as this MassLive piece details:

In November, Wall requested [Boston guard Marcus] Smart to meet him “out back” after a game. After all the yapping on the court Wednesday, the argument apparently spilled over into the locker room area, where police assembled to help keep the peace. Boston head coach Brad Stevens said he “heard what was going on in the tunnel,” told the two Celtics players still walking in from the court to retreat to the locker room, and proceeded to address his team about the incident.

…Other guys wanted to do more talking. Wizards forward Otto Porter told reporters the Celtics “try to play dirty” and “try to take you out (of) your game.” Those claims were relayed to [Celtics guard] Isaiah Thomas.

“It’s not us,” Thomas replied. “I know that. We ain’t gonna be running and telling. That’s what we’re not going to do. But we’re not a dirty team. That’s not what the Celtics are about. We play hard. So if playing hard is dirty then I guess we are a dirty team. But there was no dirty play. I didn’t see none. It’s just a lot of chatter. That’s what guys do.”

Interestingly enough, this game was initially supposed to be shown on ESPN, but was dumped in favor of the hotter Thunder-Grizzlies matchup. If it had been televised nationally, this post-game confrontation might have got even more attention. As it is, it’s still something you don’t see every day. There’s certainly bad blood between these teams, and it’s a good thing it didn’t escalate further. As Thomas noted, someone who was in the front row knows a thing or too about that:

Wednesday night, Thomas was going through a sideline interview with CSNNE sideline reporter Abby Chin when the physicality between Crowder and Wall started.

“Me and Abby was over here chilling and guys were getting stuff broken up,” Thomas said. “I just tell guys ‘Keep it hoop. Nobody’s built like that but the guy that was in the front row (former boxing champion Floyd Mayweather).’ So just keep it hoop and move onto the next one.”

Keeping it hoop’s a better idea than having a full-out Mayweather style fight. This didn’t wind up leading to much actual violence, but it might have if players hadn’t separated Wall and Crowder. We’ll see if there’s any further punishment for either.