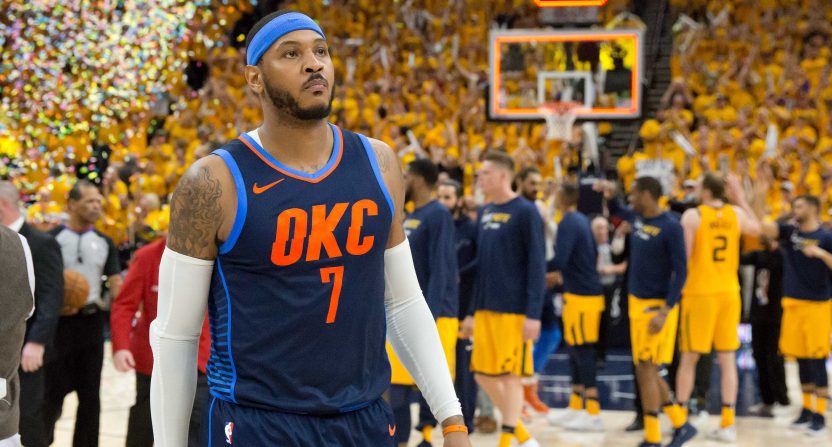 The Utah Jazz have advanced to the second round of the NBA Playoffs after a series-clinching 96-91 victory over the Oklahoma City Thunder on Friday night in Game 6.

After trailing by 13 points with seven minutes to go, the Thunder made a big run to get within one point in the final minute and a half. The Jazz would go back up three points — 94-91 — on a Derrick Favors jumper, and the Thunder followed with a bizarre, frantic possession. Russell Westbrook missed a layup, Paul George then missed a long three, and Westbrook then missed a contested long three. There was a full minute left when this all started and the Thunder played it like it was the final possession.

The score remained 94-91 in the final 20 seconds, when George missed a three, but there was contact from Jazz center Rudy Gobert after biting on George’s pump fake. No foul was called, and a frustrated Thunder team then took 12 seconds to foul Utah’s Donovan Mitchell.

ESPN color commentator Hubie Brown was disgusted by Oklahoma City not immediately fouling: “Will somebody foul somebody?”

The no-call on the George three-point attempt was obviously a huge play; if that’s called a foul and he hits all three throws, it’s a tied game. But that doesn’t at all excuse the Thunder taking so long to foul as Brown explained.

And, the Thunder didn’t deserve to win if we’re being honest. It’s been a highly disappointing season for a team that had high hopes after adding Paul George and Carmelo Anthony to join Russell Westbrook.

While Westbrook didn’t do it in the most efficient fashion (18-of-43 on FG, 5 turnovers), he at least filled up the box score in Game 6 with 46  points, 10 rebounds, and five assists. But George and Westbrook were brutal. In 45 minutes, George went 2-of-16 from the field for five points and had six turnovers. Melo had seven points and zero assists in 26 minutes, and had far and away the game’s worse plus-minus at -19.

But, enough about the Thunder. How about this Jazz team? They shocked the NBA world with their 48-34 record in the regular season (after losing Gordon Hayward in free agency), and “upset” the Thunder in six games.

This season has been a tremendous success for the Jazz regardless of how their second round series against the juggernaut Houston Rockets goes, but they have to be feeling confident right now and Houston will have their hands full. Additionally, Vivint Smart Home Arena is a very difficult venue to play in and will make things tough for James Harden, Chris Paul, and company.

So, the Jazz get ready to play Game 1 on Sunday in Houston, while the Thunder front office now has to figure out what the heck to do this offseason after being arguably the NBA’s biggest disappointment.