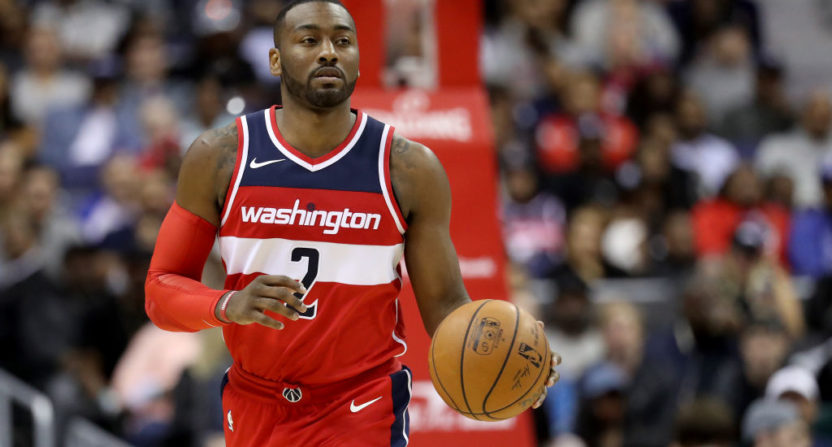 After the Lakers beat the Pelicans on Sunday night, LaVar Ball said that the Wizards “better beware, because Lonzo [Ball] ain’t losing again” in the same week.

Wizards center Marcin Gortat responded to those comments, saying Washington star point guard John Wall will “torture [Lonzo Ball] for 48 min” and that LaVar will “kill his son one day.”

On Tuesday, The Washington Post asked Wall about the matchup, and the four-time All-Star said he would show “no mercy” vs Lonzo. Wall added that Lonzo’s “dad has been talking… that makes me want to go out there and lead my team and play the best I can play.”

“Nah, no mercy,” Wall responded when asked if he would show leniency to the 19-year-old rookie point guard despite his braggadocious father.

“Certain matchups you really get up for. Like when you play [Golden State Warriors guard] Steph [Curry], you definitely want to have a good game,” Wall said. “I’m playing against [Ball]. [Gortat] said what he said about me. I didn’t say anything. His dad has been talking. … That makes me want to go out there and lead my team and play the best I can play.”

Wall’s comments come after he said a few days ago that he thinks Lonzo is “a great kid,” but that there’s a target on Lonzo’s back because of his father.

“I think his dad put him in a situation where guys are going to target him,” Wall said on the Wizards Tipoff podcast, referencing LaVar Ball. “Lonzo is one of those kids that is very talented. He’s been a good player for years, he just don’t say much. I think his dad does all the talking for him.”

“He’s a great kid from what I’ve seen on the outside looking in,” Wall said. “A lot of people in this league are going to take it personally. It’s not the son’s fault. He went back and had a better game [vs. the Suns]. That’s all he’s gotta do is go out there and play. He’s not gonna do any talking anyways. If he gets killed or don’t get killed or kills somebody, he’s not going to be the guy talking.”

Good work by dad getting his 19-year-old son targeted by the NBA’s best players.

The Wizards and Lakers tip off at 7:30 PM PT in Los Angeles, and the game will be televised on ESPN.