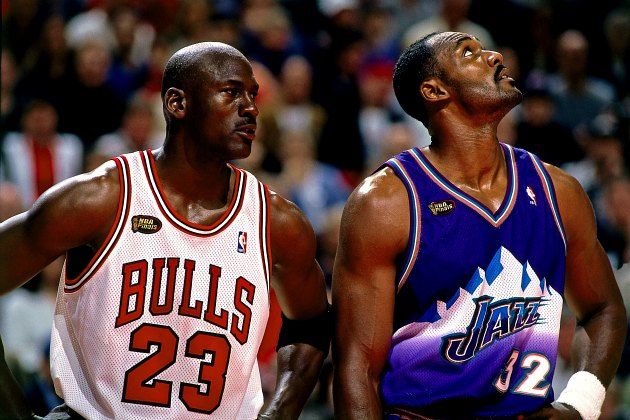 He was one of the greatest basketball players in NBA history. A winner of multiple MVP awards, and a prolific scorer. Someone who took his franchise to unprecedented heights.

Of course, we are talking about…. Karl Malone.

No player was more eclipsed by Michael Jordan than Malone. The perception of Malone today would be different if the Utah Jazz had defeated the Chicago Bulls just once in the NBA Finals. They had two opportunities, but fell 4 games to 2 both times in Jordan’s final two championship seasons. With a ring, Malone wouldv’e been the only one to beat Jordan in the Finals. Instead, he’s relegated to also-ran status.

Seems ridiculous given his accomplishments. Malone went from being the 13th overall draft pick from a small school (Louisiana Tech) in 1985 to being a Hall of Famer. He was the league’s MVP in 1997 and 1999. He is the NBA’s second all-time leading scorer behind Abdul-Jabbar. And he led Utah to back-to-back NBA Finals. Malone is arguably the greatest power forward in league history. Sure, you could easily nominate Duncan for that title, but Duncan played both power forward and center for the San Antonio Spurs.

Malone was a victim of poor timing. If Jordan never existed, Malone might have had the career enjoyed by Duncan – a small-market champion. But with the Jordan, everyone was playing for second place. Heck, Malone wasn’t even the most famous power forward of his era. He took a backseat to the loquacious Charles Barkley.

Malone wasn’t as explosive as Jordan or as interesting as Barkley. At 6-foot-9, 259 pounds, Malone was all muscle. He overpowered people in the post and had enough of a jumper to keep opponents honest. He also benefited from his tag-team partner, point guard John Stockton.

The Stockton-to-Malone pick and roll was unstoppable.

Malone wasn’t beloved. The Jazz had a reputation for being a dirty team. Stockton reportedly was notorious for hitting players in the groin, and Malone swung razor-sharp elbows that once infamously cut open Isiah Thomas’ head.

Malone was also a bit of an oddity. This was a guy whose idea of relaxation was riding around – not in a fancy sports car, but an 18-wheel truck. Sometimes it felt like the most fun thing about Malone was his nickname. He earned the moniker “The Mailman” because he delivered.

The Jazz of Malone and Stockton were late bloomers. It wasn’t until their 12th season together that they finally reached the NBA Finals. By comparison, the Bulls of Jordan and Scottie Pippen got to the pinnacle by their fourth season. Malone and Stockton looked like a serious threat to the Chicago dynasty. The 1996-97 Jazz is on the short list of best teams to not win the NBA championship.

Utah (64-18) had the best record in the West and the MVP (Malone). At the time that seemed odd, considering Jordan led the league in scoring for the Bulls (69-13). Maybe there was Jordan fatigue since he had already won four. In retrospect, Malone’s MVP seems legit when you factor in advanced metrics, which didn’t exist at the time. Malone posted a Player Efficiency Rating of 28.9. which not only led the league, but was the best of his career.

The Jazz rolled into the NBA Finals losing just three games. They dramatically clinched the trip by beating the Houston Rockets on a game-winning basket by John Stockton. That Rockets team had Hall of Famers Hakeem Olajuwon, Clyde Drexler, and Charles Barkley. All that stood in Malone’s way now was the Hall of Fame trio of Jordan, Pippen, and Dennis Rodman.

Utah had a chance to steal Game 1 on a Sunday in Chicago. Malone was at the free-throw line with score tied at 82 and 9.2 seconds left. That’s when Pippen famously tweaked Malone by saying, “The Mailman doesn’t deliver on Sundays.” Malone bricked both free throws. Those misses would haunt Malone because Jordan made a 20-footer for the victory.

The NBA Finals were a 2-3-2 format, and both teams held serve through the first four games. Game 5, known as The Flu Game, changed everything. An ill Jordan scored 38 points, including a late three-pointer to give the Bulls the lead for good. They held on 90-88 to deal Utah its first home loss of the post season. In Game 6, Chicago survived another hard-fought match thanks to Steve Kerr’s jumper to win 90-86 and clinch their fifth NBA championship.

Malone was frustrated. Three of those losses came by a combined eight points. But Utah got another shot. A rematch came in the 1998 NBA Finals, and this time the Jazz had home-court advantage. Both teams finished the regular-season 62-20, but Utah swept the season series vs the Bulls 2-0. Plus, Chicago appeared emotionally drained. Management had already said that this would be Phil Jackson’s final year as coach. Jordan repeatedly said that he wouldn’t play for any other coach. Underpaid Pippen wanted out and was almost traded.

The 1998 NBA Finals were expected to be a slugfest. In Game 1, Utah opened the series with an 88-85 victory in Salt Lake City. Stockton made a pair of free throws late, and Pippen missed a long jumper at the gun.

But the Bulls won the next three games to take control, including Game 3’s 96-54 beatdown in Chicago. The Jazz pushed it to a six-game series. But once again, Malone saw Jordan get the better of him. Clinging to an 86-85 lead, Malone had the ball stolen from him by Jordan on a double-team. That set up a memorable finish.

To this day, longtime Utah fans will howl that Jordan got away with a push-off on Bryon Russell. It’s the Zapruder moment of the NBA Finals. But a foul wasn’t called, and Jordan’s final shot as a member of the Chicago Bulls gave them an 87-86 series-clinching victory and their sixth championship.

This marked the end of the Bulls dynasty. Jordan retired. Jackson’s contract expired. Pippen was traded. It also marked an ending of sorts for Utah. The championship window was closed. They haven’t been back to the NBA Finals since. Malone stayed with the Jazz for five more seasons, and at the age of 40, it looked like he might retire after the 2002-03 season.

Instead, Malone — along with fellow aging star Gary Payton — joined the Los Angeles Lakers to chase a ring. But it was another NBA Finals disappointment for Malone. Inexplicably, the Hall of Fame foursome of Shaquille O’Neal, Kobe Bryant, Payton, and Malone was stunned by the Detroit Pistons, 4 games to 1.

Malone was done, retired. Heck of a career. He scored 36,928 points (second all-time) and grabbed 14,968 rebounds (seventh). Undeniably one of the best there ever was. A star unfortunately eclipsed by the supernova of Jordan.