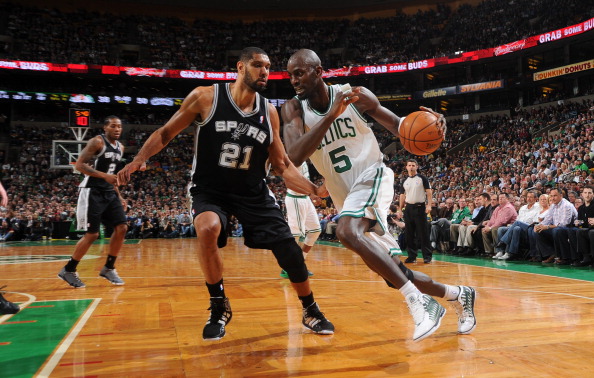 The basketball universe has been celebrating Kevin Garnett’s incredible career ever since he announced his retirement on Friday after 21 NBA seasons with Minnesota, Boston and Brooklyn. He was known for his hallmark intensity, his fearless defense and athleticism, and being the pioneer of the renewed high school entry trend of the late-90s and early aughts.

Garnett will go down as one of the greatest power forwards to ever play the game, and yet he wasn’t the best “four” of his era. He’s not even the best power forward to retire since the end of last season.

That distinction would go to Tim Duncan, the mild-mannered San Antonio Spurs legend who offered an immensely stark contrast to KG’s playing style. The following four charts will demonstrate that Duncan had the superior career, based on both counting and advanced stats.

Both Garnett and Duncan are 15-time All-Stars — which is ridiculously difficult to accomplish — but Timmy did it in two fewer seasons. Championships aren’t everything and Duncan had the good fortune of playing on some tremendously talented San Antonio teams, so you can decide how greatly you value the four more titles he had than The Big Ticket.

More impressive are the individual awards. Duncan had one more MVP award — though MVP awards are generally given out to players from the top one or two teams in their conference, giving Duncan more opportunities to win them — six more All-NBA selections and three more All-Defense awards. Garnett had the lone Defensive Player of the Year award between the Hall of Fame duo.

Next is the chart comparing how Garnett and Duncan performed over their careers in the regular season, mixing some basic and relatively advanced stats.

Despite playing in 70 fewer regular season games in his career, Duncan had exactly 15 more career win shares to go with a .2091 career win shares per 48 minutes, a mark that’s 13th in NBA history, per Basketball-Reference. Garnett’s same WS/48 total is 33rd all time.

Offensive and defensive ratings are basically determined by the number of points scored or allowed while a player is on the floor per 100 possessions. While Garnett had a minuscule 109.97 to 109.7 advantage in offensive rating, according to Basketball-Reference, Duncan’s defensive rating far outpaced Garnett’s. More on that in a bit.

Speaking of the league’s all-time hierarchy, there was talk over the weekend about where Garnett’s defense stacks up historically. At some point after it was apparent that Garnett’s Timberwolves career was over and that he was going to retire, ESPN’s Zach Lowe tweeted this about KG’s defense:

There will never be another KG. Very strong argument that he's the greatest defensive player ever.

Lowe is one of the three to five best NBA writers on the planet, but there are some telling statistics that indicate that Garnett was no Tim Duncan defensively.

Garnett’s defensive win share total is elite; seventh all-time at 91.5. Duncan’s? His 106.34 is second all-time behind Bill Russell, whose career mark (133.64) may never be eclipsed.

DBPM, or defensive box plus-minus (explained here) is “a box score-based metric for evaluating basketball players’ quality and contribution to the team.” Not surprisingly, Garnett’s DBPM ranks 18th all-time — an excellent ranking — but not as good as Duncan’s seventh-best 4.02 mark. This isn’t a tell-all stat like defensive rating or defensive win shares, but still provides another interesting look at why Duncan was the better defender.

And the final chart illustrating the separation between these two greats is their playoff performances.

Only Derek Fisher, of all people, has played in more career playoff games than Duncan and only LeBron James and Michael Jordan have more career postseason win shares. Stats like that prove how Duncan was one of the best power forwards to ever live. Duncan’s playoff scoring, rebounding, blocks and PER are all better than his regular season numbers, while Garnett saw an improvement in only scoring and rebounding.

Nothing about this column is to even imply or insinuate that Kevin Garnett didn’t have an all-time great career, because he did. His legacy as a tremendous player and unbelievably intense competitor will be remembered for decades to come. But let the record show that not only was Tim Duncan better than Kevin Garnett, but is probably the best power forward ever.