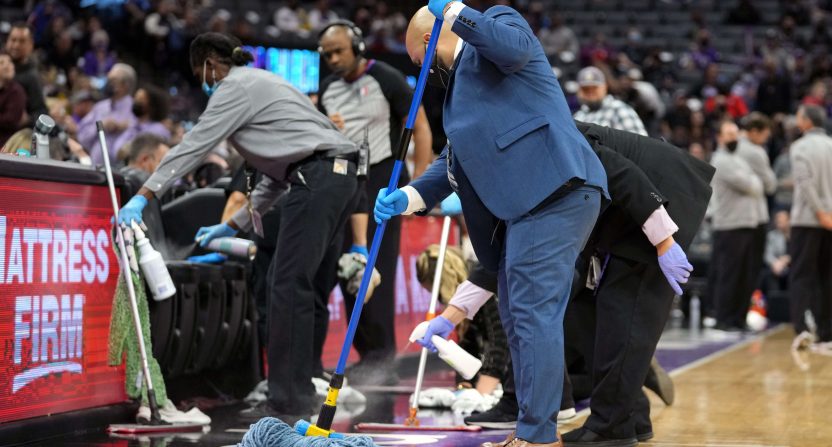 Some might say that a Sacramento Kings fan vomiting during a game might be a little too on the nose as a metaphor for the state of the franchise, but that doesn’t make it any less apt.

The Utah Jazz were forced to clear their bench on Saturday night during the game when a nearby Kings fan sitting courtside vomited on the court. The incident at Golden 1 Center in Sacramento caused a 15-minute delay while it was cleaned up.

The moment was captured on video so if you’d like to “enjoy” it, you can watch it below. But if that’s not your kind of thing, that’s fair too.

The incident happened near the start of the fourth quarter when the Jazz were up 14 points at the time. Right as everyone started to notice what had happened, players immediately started running in the other direction and covering their faces.

Utah wants nothing to do with the bench area after a fan blew chunks all over the floor. #PukeGate pic.twitter.com/d8O1lUhDkH

“I can’t even lie, I was just focused on getting out of the way,” Donovan Mitchell told the Deseret News. I didn’t pay attention to anybody else. Just, no parts. I wanted no parts of that.”

“Life is full of surprise. I hope he’s OK. … I kind of made eye contact with him, too. He was smiling — smiling and throwing up at the same time,” said Added Rudy Gobert.

The fan was escorted away from the game and did not return. The arena then posted their alcohol policy on the jumbo screens, reminding people that those who are intoxicated with be ejected. It’s not clear if those two things are specifically related but we can certainly make assumptions.

Like…a lot. That was utterly disgusting, and something I've never seen at an NBA game – especially courtside. Game is delayed, and the Kings immediately display the alcohol policy on the big screen. https://t.co/xQQgieSHGk

The Jazz went on to win the game handily in spite of the incident. And while the Kings certainly have a lot of things to be concerned about (especially now that Luke Walton is fired), they took the time to acknowledge how weird it all was for them too.

"10 years in the league and I've never seen anything like that." 😳

Harrison Barnes on the lengthy fourth quarter delay after a fan threw up while sitting courtside pic.twitter.com/Af1UcPM9FA

As you can imagine, social media had a field day with the Kings fan puker, which offered up so many opportunities too good to pass up.

Last night, a fan sitting courtside at the Kings/Jazz game puked all over the court with 9:32 left in the 4th quarter.

This is a thread of player, coach, fan, and personnel reactions the moment they found out what had just transpired.

Puking next to the Jazz bench is a bold strategy. Whatever it takes to win.

Shoutout to that fan.

One fan may have captured the season in a nutshell. As the Kings were busy falling to 1-7 over their last eight games Saturday night at Golden 1 Center, a fan hurled vomit all over the court and caused a long delay. Here are 6 quick thoughts from the 123-105 loss to the Jazz.

The vomiting fan during our game vs. the Kings may have had a rough night, but he will be always remembered by the Kings and Jazz players 😅 pic.twitter.com/yh0msUfD0R

We hope that fan is handling his hangover well today. We’re guessing he won’t be welcomed back in the arena anytime soon, but many Kings fans might tell him that’s a good thing.