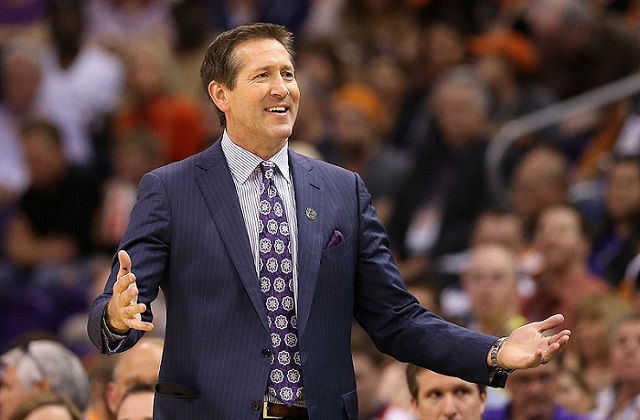 So maybe Phil Jackson isn’t as nuts and out of touch as we all thought.

It’s not that naming Jeff Hornacek the New York Knicks’ new head coach — which the team is on the verge of doing, as first reported by Bleacher Report’s Howard Beck — is a particularly brilliant or inspiring move. Hornacek is a solid candidate with fine credentials (including a runner-up finish in the 2014 Coach of the Year voting), but one who also went 101-112 during two-plus seasons in Phoenix before being canned by the Suns in February.

On Hornacek-Knicks: It's "as close as humanly possible," per source, tho not official. Deal is expected soon, barring any unforeseen snags.

What Hornacek does represent, though, is a symbol of Jackson’s newfound flexibility. At least we can assume that’s what this means, right? That Mr. Triangle himself is no longer glued to an offense that has as much a place in the modern NBA as a ground-and-pound one does in today’s NFL.

It’s about taking advantage of the tools being given to you — in this case the prohibition on hand-checking, the lax zone defense rules, the proliferation of faster and more explosive athletes who can knock down shots from all across the floor. The NBA today is about point guard play, pick-and-rolls and spreading out opposing defenses with three-point shots. The triangle offense relies on big men, post-ups and mid-range jumpers. Forget, for a moment, all the philosophical musings.

From a basketball perspective, Jackson’s blind loyalty to this relic of an offense was holding the Knicks back. Derek Fisher tried stepping out of that box (triangle?) last year. That contributed to him getting fired.

For a while now, it’s appeared as if Jackson had tabbed his head coach long ago, that this whole process was in actuality nothing more than a muse. That Jackson was just bidding time so that he could eventually hand the job to Kurt Rambis, his longtime buddy and acolyte. Rambis’ career record of 64-161 didn’t seem to bother Jackson, nor did his preference for banishing rookies or thwarting Kristaps Porzingis by stashing him in the post.

What exactly is it about Hornacek that moved Jackson to, finally, display some willingness to step out of his shell? Well, at this point, we don’t know. Same goes for what type of offense Hornacek and Jackson agreed to run.

Instead, all we can do now is speculate, and what jumps out when you look at Hornacek’s history is all the ways his various philosophies seems to differ from those that Jackson seems to hold so dear.

Here’s what we know about Hornacek’s Suns teams:

** They played fast. The Suns finished eighth in the NBA in pace in 2014 and third in 2015. The Knicks haven’t finished above 24th since Jackson took over.

** They liked to spread the floor with shooters and attack the rim. Part of that, of course, was a result of personnel. Hornacek’s Suns teams had a ton of point guards and versatile big men on the roster. But he had no problem letting Channing Frye spot up from long-range and seemed to enjoy using Frye as means to create space for his creative guards. Not only did Hornacek not run the triangle offense in Phoenix; he didn’t even employ any of the triangle’s overarching principles.

An example: Last year, no team had the ball go to a player standing at the elbow more than the Knicks, according to NBA.com’s player tracking data. That area is a major part of Jackson’s offense. It’s where Jordan and Kobe did so much of their damage and where Jackson believes a player can be most dangerous. But in the two full seasons Hornacek was at the helm for Phoenix, the Suns finished 26th and 21st in elbow touches, respectively.

This doesn’t mean that Hornacek is diametrically opposed to leaning on Jackson and evolving a bit. The Knicks don’t exactly have a plethora of point guards ready to take advantage of a spread-out defense anyway. That said, it’s hard to imagine Hornacek coming in and running an offense that he’s never taught before. Sure, he might be familiar with it from his days as a guard on the Stockton and Malone Jazz teams and Charles Barkley’s Suns teams, two units that did battle with Jackson’s Bulls. But that’s a long way from feeling comfortable using it as his primary scheme.

And so, without yet hearing from the respective parties, or knowing much really, here’s what we’re left to believe:

That Jackson had a come-to-Jesus moment. That he, finally, realized Porzingis — who can stretch the floor on offense and protect the rim on defense, a rare and valuable combination — should be playing center and not small forward, like Rambis wanted. That he sees that the problem with mid-range jumpers is not so much that they’re, statistically speaking, the least efficient shot you can take (though they are) but that they kill spacing and close off driving lanes.

Hornacek is far from a perfect candidate. For one, his defenses in Phoenix were never particularly strong (finishes of 13th and 17th in defensive rating). Also, choosing him over Frank Vogel and David Blatt does seem a bit strange.

But comparing him to the other available candidates is missing the point. Jeff Hornacek is a competent basketball mind and a man who has a firm grasp on how NBA basketball today is played today. That could not be said about Kurt Rambis and until now, it was also fair to wonder whether such a description applied to Phil Jackson as well.