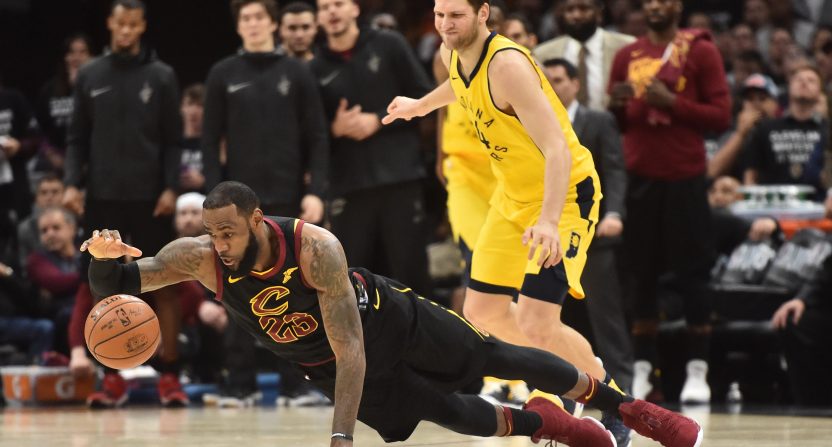 The Pacers were the better team. Over the course of seven games, the Pacers had two blowout wins, won a close game, and could have won any of the remaining four games very easily.

Indiana ended up +40 for the series, one of the largest margins ever for a losing team. (Understandably so.)

Indiana's plus-40 margin is in fact the largest for a losing team in a seven-game series since at least 1984. Phoenix's loss to Portland in the 1990 Western Conference finals (plus-34 in a six-game loss) had been the highest in that span. https://t.co/30m3aDoafW

But while the Pacers have the better team, they very clearly do not have LeBron James. No one does, and no one ever has. (Debate the level of greatness between Jordan vs. LeBron if you really want to, but LeBron’s a singularity.)

There’s not one player in the NBA who, if switched with LeBron, would have won the series. LeBron essentially played the way Russell Westbrook thinks he has to play, except LeBron actually did have to play that way, and he achieved his goal. The second-best player on the Cavs is Kevin Love, who wasn’t great, and may have been dealing with a thumb problem. After that, Cleveland’s next best player is actually tough to discern, though whoever you pick likely wouldn’t crack the top 7 of the Pacers rotation.

This is the worst LeBron team since he left for Miami the first time around, and while LeBron himself bears some responsibility for that (*cough*drove Kyrie away*cough*), it’s still impressive the Cavs were in the position they’re in. They outperformed their point differential for the regular season; the Pacers, for example, had a better one, but finished below Cleveland in the standings, which is why this game was in Cleveland and not Indiana.

And again, the Cavs were -40 for the series and won. That’s astounding. LeBron tried to play the whole game today, but cramping forced him to the locker room for fluids at the start of the fourth quarter, but his supporting cast managed to step up and extend the lead during that stretch; that afforded him more rest. (Indiana sitting Victor Oladipo and other starters while LeBron was in the locker room may have cost the Pacers the game.)

(LeBron also delivered one of his most egregious flops ever, but hey, a win’s a win.)

Will he be able to do the same thing against the Raptors? Maybe! It’s not impossible. But that’s a lot of burden for James on the heels of a long regular season and a massive minutes load. It doesn’t look likely that he’ll want to stick around for the end of his career in Cleveland, given the roster around him, but at least now if he leaves it won’t be on the heels of his first ever first round loss.