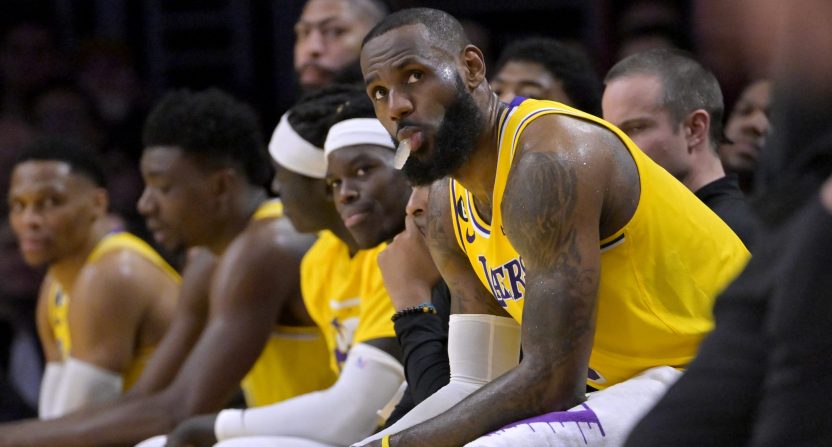 The Los Angeles Lakers took on their in-town rivals in the Los Angeles Clippers on Tuesday night. Lakers star LeBron James had an incredible game that produced an unbelievable stat that speaks to his excellence over the year.

James finished with 46 points along with eight rebounds and seven assists while committing zero turnovers. His three-point shot was on point Tuesday, making a career-high nine three-pointers in the game.

(As for his Lakers teammates, not great) pic.twitter.com/XkRFvmxuSP

LeBron James is the first player in NBA history to make 9+ threes in a game at age 35 or older.

Despite this unreal performance, the Clippers simply outmatched a Lakers team still without star forward Anthony Davis, cruising to a 133-115 victory.

There wasn’t much more James could do to help the Lakers come away with the win, which may be why he certainly did not look pleased on the bench in some moments of the game.

Regardless, his impressive individual performance accomplished a rare feat in NBA history that only he has done. According to ESPN Stats & Info, James is the first player in NBA history with a 40-point game against all 30 NBA teams.

LeBron James is the 1st player in NBA history with a 40-point game against all 30 franchises. pic.twitter.com/2dkRT4E5xt

Many took notice of this wild feat by James and gave him a ton of praise for the unmatched longevity that he’s shown over this excellent career.

James Harden joins him if he ever drops 40 on the #Rockets https://t.co/FyNgjwRs9d

While LeBron has continued to be excellent this season in his 20th NBA season, the Lakers as a team have not been up to par, sitting at just 22-26 on the year.

He would surely trade all the personal accolades for the Lakers as a team to play better, but it appears that this may be another year that his immense talent is wasted on a below-average team.