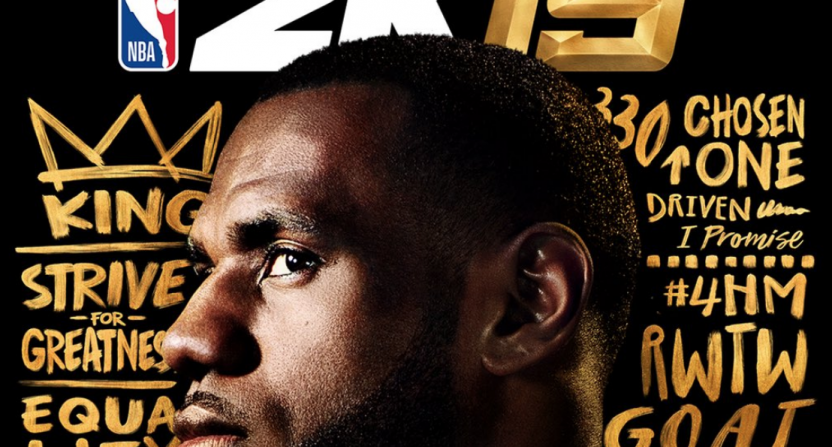 2K Sports on Tuesday announced that LeBron James will appear on the cover of its 20th anniversary edition, NBA 2K19. The cover will display the four-time MVP’s face alongside phrases such as “Chosen One,” “Strive for Greatness,” “Equality” and “G.O.A.T.” penned in gold.

One thing it will not display? James’ uniform.

With LeBron headed for free agency and rumored to be considering a host of potential destinations, 2K opted for a headshot only — one that will work equally well whether he winds up in Los Angeles, Philadelphia, Houston or back in Cleveland.

Congrats to Lebron James! He is officially the cover star of 2K Sports on #NBA2k19, the 20th anniversary edition of the video game series. pic.twitter.com/G97ngXAPpn

2K has apparently learned from past mishaps. Just last year, the game released a cover that featured Kyrie Irving in a Cavaliers uniform, then had to create and circulate a whole new cover after Kyrie was dealt to Boston. Other games have faced similar dilemmas in the past, including when Madden published a Brett Favre cover in honor of the quarterback’s retirement, then was forced to create an alternate when he returned and signed with the Jets.

With LeBron, however, there will be no such issue. The best player of the past 20 years will appear on a cover celebrating the past 20 years of NBA 2K, no matter what uniform he happens to be wearing in real life.

2K released the following trailer for the upcoming game, featuring clips from LeBron’s high school days and some stirring narration from rappers 2 Chainz, Rapsody and Jerreau.

2K19 will mark LeBron’s second ever 2K cover. He also appeared on 2K14, which featured a special “LeBron: Path to Greatness” mode and a soundtrack curated by James himself.