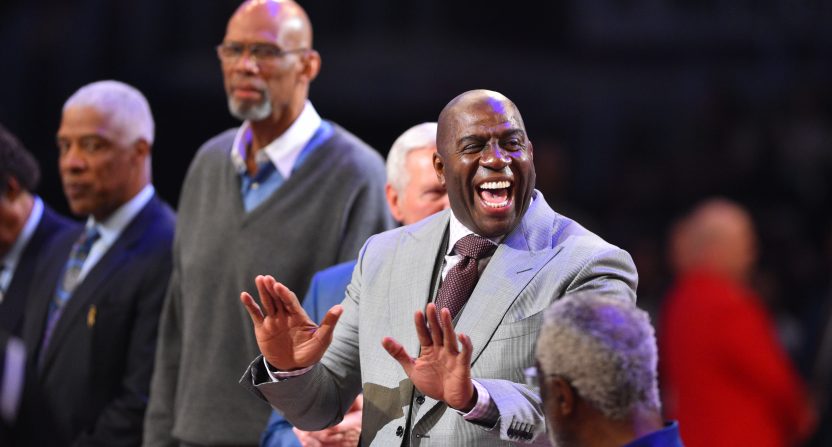 The Los Angeles Lakers’ future was in a bit of disarray as a tumultuous season came to a close and with concerns about LeBron James’ focus growing. After Tuesday night, that disarray just doubled.

Seemingly out of nowhere, Magic Johnson announced that he was stepping down as the President of Basketball Operations for the Lakers after a little over two years on the job. Not only did he announce the news at an impromptu press conference right before the team’s season finale, but he also made it public before apparently telling team owner Jeanie Buss.

On Jeanie: “I think she’s going to be caught off guard. And I think she’ll be hurt by not having somebody she can trust…” Says once she sees his face she’ll understand this was the right decision for him.

Johnson noted in his announcement that he wanted to preserve the relationship he has with Buss and that he seemed to want to be more of an ambassador to the game than being forced into the role that comes with being an executive for one club. He also started rambling a bit about how some of the instances that have come up during his stint on the job have ruffled his feathers over the way he’s been perceived.

“Today, I’m gonna step down as the President. I don’t wanna…[Buss] and I have such an amazing relationship and I think that she gave me full power to do what I wanted to do. But I think that with her and I, I want to always preserve our relationship… I think that I had more fun when I was able to be the big brother and ambassador to everybody. I thought about Dwyane Wade retiring tomorrow and I can’t even tweet it out or can’t be there. Serena Williams called me a week ago and said ‘will you mentor me and be on my advisory board?,’ and I said I’m gonna do that.”

So when Ben Simmons called and, we went through the proper channels, and they made me look like the bad guy out of that situation, but I didn’t do anything wrong but do everything right… I’ve been thinking about all those times when guys have wanted me to mentor them or be a part of their lives and I can’t even do that. I had more fun on the other side than on this side.”

It certainly sounds like Johnson had tired of being perceived as a poor executive who wasn’t able to put a winning roster around LeBron James and seemed to get rebuked at every turn as he attempted to bring other stars to the Lakers. It is perhaps not a coincidence that The Athletic released a story earlier today about the ineptitude of Johnson’s latest run with the Lakers, which paints him as an absentee exec who didn’t commit fully to the job and didn’t put in the work needed to keep his team competitive.

Since taking over as president of the Lakers, Magic Johnson never fully committed to the job. Often he was traveling and away from the team. His office hours were limited. He didn't do a lot of scouting. Running an NBA team takes a tremendous commitment of time and energy.

In a way, it seems as though Johnson proved that assessment to be correct just a few hours later. His later comments would only confirm this notion that Magic didn’t really seem to want the job all that much anyway.

Magic Johnson says the decision was not over Luke Walton’s job status. He says making this announcement, which, Jeanie Buss isn’t aware of yet, is a “monkey off my back.”

Magic Johnson said he will return to community work and reaching out to players around the league to help in their development: “I’m a free bird and I can’t be handcuffed … This is a good day.”

Of course, considering the Lakers are almost certainly about to fire head coach Luke Walton and his staff, it’s hard not to read into the timing of Johnson’s decision as well. And by stepping away right before he would have been the face of that decision implies Magic really, really hated the notion that he’d have to be the bad guy one more time.

Lakers coaching staff fully expected to be fired in hours after the final game of the season. They had believed they were gone for months. Now? Magic quits in public, saying he's too scared to tell Jeanie Buss face-to-face. What an embarrassing episode for a historic franchise.

More to come on this shocker and the aftereffects that the Lakers franchise are sure to be feeling all offseason.