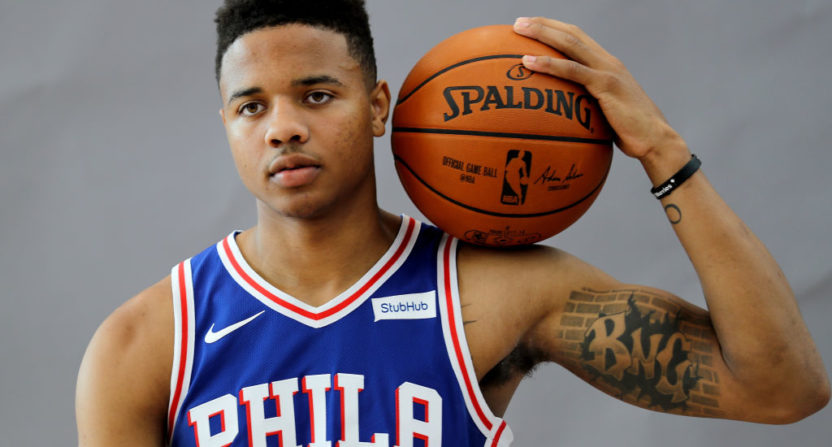 Markelle Fultz was the first overall pick in this past summer’s draft, a scoring combo guard out of Washington with good size, a playmaker’s vision, and the ability to get buckets in a variety of ways.

He lit up the summer league before a minor injury ended his run, but it seemed as though the 76ers had found another piece to their #process. A few weeks ago, Deadspin wrote about how Fultz was apparently changing his free throw stroke:

Probably no big deal, right? Probably it was just his free throw stroke, and not his jumper, and anyway Fultz said he wasn’t actually going to change anything. No way this would be a thing where the Sixers would find themselves, days later, pushing Fultz to reconstruct his jumper back the way it used to be, just a couple weeks before the start of the regular season. Ha ha! We are worrying about nothing, here, I’m sure.

And now, we have some preseason evidence that yes, indeed, Markelle Fultz decided to completely change his free throw stroke. And the end result is, well, judge for yourself:

Small sample size, but Markelle Fultz is shooting just 29.2% from the floor and 40% on FT’s this preseason.

More concerning is his form: pic.twitter.com/FzZSTsRZhh

Fultz shot over 40% from 3 in college, so his shot was clearly not broken, despite a middling 65% from the free throw line. But now, apparently chasing greater returns, Fultz has resorted to the kind of shot that leads to not being picked at the playground.

76ers coach Brett Brown admitted the problem is real when asked if he was comfortable with the state of Fultz’s form:

No, and so we’re gonna get back on track. His heart is in the right place. All by himself, he pivoted out over the summer and tried to make it better and tweak it, and he’s in a place right now where we’re gonna try to remind him where his shot was and try to bring that back into probably more a tighter shot, bring his release point down a little bit, bring the ball closer to his body. We have a Team Markelle all around him to help him, and he’s gonna be just fine.

This is the kind of thing golfers often do, tinkering with a successful swing because they always think there’s more to be gained. And sometimes there is, but there’s also the risk of undoing everything that made you great to begin with. We’re likely not there with Fultz yet, of course. But that free throw form is horrendous.