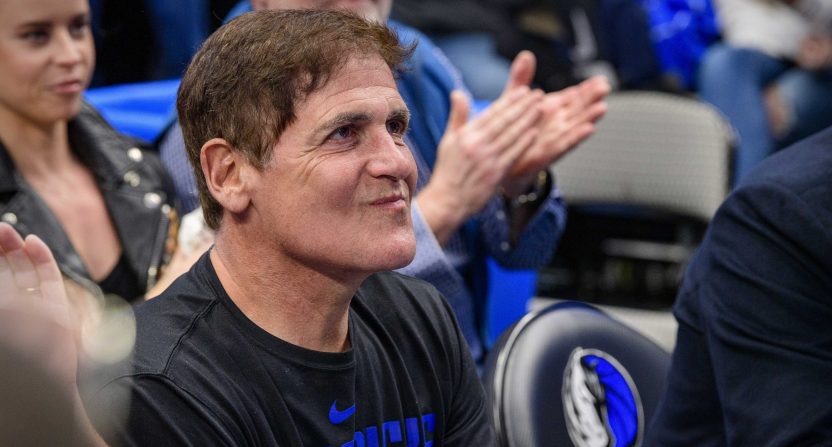 Something that gets lost in all these sporting events being canceled due to the coronavirus is the hourly gameday staff who work these events. From concession workers to cleaning crew to parking attendants to ushers, hundreds of people work these games and typically go unnoticed as we enjoy the game we see in front of them.

Obviously, safety comes first and risking the spread of a virus just to keep getting people paid isn’t top priority but lots of these people need that money because expenses like housing and food don’t really care if you can’t work. While the vast majority aren’t bothering to help these people out, some within sports are figuring out ways to do their part.

Last night, Dallas Mavericks owner Mark Cuban got the ball rolling by revealing in Wednesday night’s postgame press conference that he reached out to figure out how much it would cost to keep paying Mavs employees and hourly arena workers during the suspension.

The Cleveland Cavs followed suit. They were hosting the MAC Tournament and when that got canceled, CEO Len Komoroski revealed that they will pay part time workers who were supposed to be working the tournament. It’s not known if that includes Cavs games, which are suspended. Kevin Love stepped forward and donated $100k for arena staff.

Everyone reacts differently to stressful situations. And the fear and anxiety resulting from the recent outbreak of COVID-19 can be extremely overwhelming. Through the game of basketball, we've been able to address major issues and stand together as a progressive league that cares about the players, the fans, and the communities where we work. I'm concerned about the level of anxiety that everyone is feeling and that is why I'm committing $100,000 through the @KevinLoveFund in support of the @Cavs arena and support staff that had a sudden life shift due to the suspension of the NBA season. I hope that during this time of crisis, others will join me in supporting our communities. Pandemics are not just a medical phenomenon. They affect individuals and society on so many levels, with stigma and xenophobia being just two aspects of the impact of a pandemic outbreak. It's important to know that those with a mental illness may be vulnerable to the effects of widespread panic and threat. Be kind to one another. Be understanding of their fears, regardless if you don't feel the same. Be safe and make informed decisions during this time. And I encourage everyone to take care of themselves and to reach out to others in need — whether that means supporting your local charities that are canceling events, or checking in on your colleagues and family.

While the Mavs and Cavs are doing their part, Cody Zeller stepped forward for the Hornets as a player who wants to help. He didn’t really expand upon what that is but mentioned the option of paying workers himself.

Absolutely! We all have fun playing and watching NBA games, but many of our hard working hourly employees and support staff depend on wages from our home games. We’re going to make sure that they’re taken care of! Even if I have to pay out of pocket to help out https://t.co/WMb3tEq5Gt

Last but not least, the Nashville Predators, who have had to deal with a tornado last week, came forward on the NHL side to pay the wages for hourly workers.

#Preds CEO Sean Henry says employees scheduled to work sporting events that were cancelled due to COVID-19 will receive the pay they were due. @OnTheForecheck

While paying staff during this time isn’t a requirement, it is something that goes a long way. Bills still come no matter what and they don’t care if you’re working or not so it’s going to be a difficult time for many people, no matter where we are in the sports industry. If these stories inspire other teams to come forward, even if it’s just for positive PR, it’s going to help out a lot of people who are in a crunch.