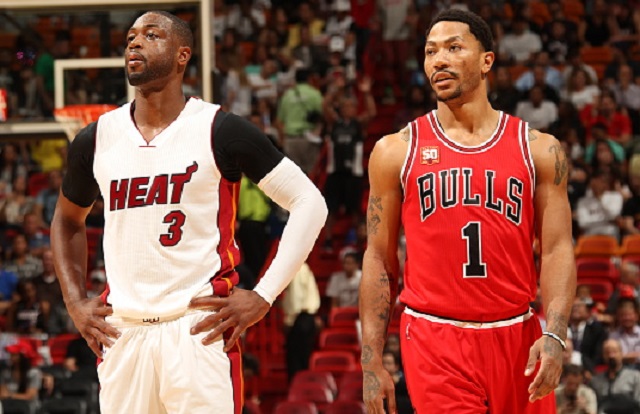 The last time the Chicago Bulls and Miami Heat missed the NBA Playoffs in the same year was in the 2007-2008 season, when the Heat won 15 games and traded Shaquille O’Neal to Phoenix, and Ben Gordon led the Bulls — coached by Scott Skiles, Pete Myers and Jim Boylan— in scoring. In other words, it’s been a really, really long time.

ESPN released its 2016-2017 Summer Forecast on Monday and projected Chicago and Miami to finish ninth and 12th, respectively, in the East. Both teams have had pretty bizarre offseasons that took both franchises to this current, not so great, transitional point in time.

It made perfectly reasonable sense that a Chicago management group at odds for years with former head coach Tom Thibodeau would want to move forward with a different roster under current head coach Fred Hoiberg, especially after missing the playoffs last season. Pau Gasol moved on to San Antonio, Derrick Rose was traded to New York in a viscerally symbolic move signaling the end of an era and Joakim Noah— frustrated after a season marred by injury and inconsistent playing time— joined Rose with the Knicks.

Miami got key contributions from veteran players like Joe Johnson, Luol Deng, Gerald Green and the newly retired Amar’e Stoudemire. That quartet, however, won’t be back with the team this fall after helping the Heat get the East’s third seed in a crazy four-way tie before falling to Toronto in the conference semifinals. With Chris Bosh’s NBA future in question and Goran Dragic entrenched at point guard, the team maxed out center Hassan Whiteside but left Dwyane Wade’s future in flux.

Chicago prides itself on being in the playoff hunt each year, so building a young team around Jimmy Butler probably wasn’t in its plans. After the Rose deal brought Robin Lopez, Jerian Grant and Jose Calderon (who was later traded to the Lakers) from New York, general manager Gar Forman said, “Our goal is to get younger and more athletic, and this trade moves us in that direction.”

Take a look at some of Rajon Rondo's best plays through his career #TurnBackTheClock.https://t.co/uXWcmHcE7B

Turns out that Chicago would end up neither younger nor more athletic.

Forman and company proceeded to sign 30-year-old Rajon Rondo away from Sacramento after he led the league in assists and posted his best statistical offensive season in several years. Just when it seemed like the questionable Rondo-Butler backcourt was set, Chicago pried a disrespected Wade from Miami for two years and $47 million, leaving both the Bulls and Heat in very odd situations.

After finishing 21st in scoring offense, 23rd in offensive rating and 21st in made 3-pointers per game last season, Chicago’s new lead trio of Butler, Wade and Rondo “combined to make 133 3-pointers last season on 31.7 percent shooting,” per the ESPN Forecast. The Bulls will have to rely heavily on Nikola Mirotic, Doug McDermott and Tony Snell to infuse Hoiberg’s rotation with some desperately needed shooting alongside rotation bigs featuring Lopez and Thibodeau holdover Taj Gibson.

As for the Heat, Pat Riley scrambled to put together his own unique — to put it nicely – group together in free agency, which we’ll get to in a second. After playing in 68 career games, only seven of them starts, Brooklyn signed shooting guard Tyler Johnson to a $50 million offer sheet that was so unexpectedly large that he reportedly barfed when he saw the number. Riley proceeded to match that offer sheet, one that will pay Johnson over $19.2 million for the 2018-2019 season alone.

Along with Dragic, Whiteside and hopefully Bosh, head coach Erik Spoelstra will have to give a lot more playing time to Johnson, Justise Winslow and 22-year-old guard Josh Richardson, who showed a lot of promise in 21 minutes per game during his rookie season. Josh McRoberts and Udonis Haslem are the team’s two veteran holdovers. As for those players Riley signed, Derrick Williams comes over from the Knicks after a strong offensive season, but will need to be more careful about who he brings home from the clubs on Collins and Lincoln. Wayne Ellington hopped aboard after a forgettable season in Brooklyn; James Johnson, most recently with the Raptors, joining in a rotation role at $4 million is a steal; Luke Babbitt shot over 40 percent on 109 threes last season. But the real prize here, of course, is Dion Waiters.

I didn’t do it for the money… I did it for the opportunity to go out & ball & have fun. Everything else will take care of its self!!! I just felt like it was the best situation for me…& my family. I could have waited & got wat I wanted. But I rather be happy then miserable at the end of the day!!! Meaning Yu can have everything & still not be happy… #heatnation let’s get it!!! #provethemwrong #stamped #Philly

Waiters, the subject of last week’s Offseason Review column, sat on a $6.8 million qualifying offer from Oklahoma City for weeks before that was rescinded, and then inked a one-year deal for the $2.9 million room exception with Miami. Waiters reportedly had better offers out there, but gave his own reasoning for signing on the cheap.

For Waiters Island, “ball & have fun” means putting up shots. Lots of them. With Wade’s fifth-ranked usage rate out of the picture, somebody’s going to have to replace that in the Miami offense. And who better than Waiters, a volume shooter on what could be a bad team?

When Dion Waiters and “THE RECKONING COMETH” are mentioned in the same sentence/tweet, it usually doesn’t bode well for a team’s success. Miami could definitely go from third in the East to missing the playoffs. Chicago went from having an aging veteran frontcourt around Jimmy Butler in Gasol and Noah to an aging veteran backcourt around Butler in Rondo and Wade. They too will miss the playoffs, ESPN’s projection predicts.

We’re still towards the end of July here, so moves can still be made, but it’s been an odd, bizarre, wacky offseason for both Chicago and Miami and for now, that’s not meant in a good way.