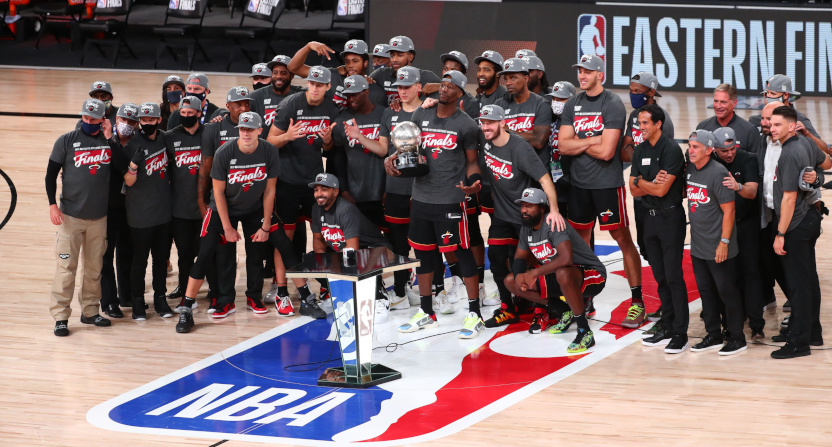 The NBA has not seen a Finals team quite like the Miami Heat in its recent history. The Heat, fresh off a 4-2 series win over the Boston Celtics, are a remarkably egalitarian bunch, a collection of well-fitting players who combine to be greater than the sum of their parts. They are good at everything and have arguably the NBA’s best coach in Erik Spoelstra.

They’ve had this sort of success in the midst of superstars joining up everywhere. With roster-building feeling like more and more of a fraught endeavor in the NBA, Miami assembled a great team capable of shape-shifting into whatever it needs to be. They formed a wall and frustrated Giannis Antetokounmpo. They rained threes on a drop-coverage Bucks team. They played a tough, cohesive zone against the Celtics’ numerous elite ball-handlers. No one can have an easy time against this team.

It’s a different archetype from what we’re used to seeing. In part because the same teams have consistently made the NBA Finals this decade, we usually see one or two dominant stars that are the clear and identifiable reason for their team’s success. Apart from the KD Warriors, which had a ridiculous surplus of stars, we’re used to various LeBron iterations, and the Kawhi Raptors, and the Splash Brothers. The Mavs had Dirk, the Thunder had KD and Russ, and the dynasty Spurs had Duncan and Parker.

The Heat, by that definition, have Bam Adebayo and Jimmy Butler. But those stars aren’t quite the driving forces that other teams have had. They are All-Stars, but they’re not quite superstars, and they’re not on the shortlist of players you’d expect to be the best players on a championship winner. Adebayo is a “beyond the box-score” winner. Butler is a more traditional go-to star, but his scoring isn’t dominant, and he can be on and off with his shooting performances.

There is no “carrying” being done by anyone here. When the Heat have needed a late-game bucket, they have just as often turned to Tyler Herro or Goran Dragic as Butler or Adebayo. They are a star by-committee team, and that is no easy thing to assemble in 2020’s NBA atmosphere.

Butler is their main piece, acquired by free agency in part because he wanted to play in South Beach. The rest of the team is organic, and they created the circumstances that made them an attractive destination for a player like Butler. They developed Adebayo into a Most Improved Player candidate. They drafted Herro with the 13th-overall pick and discovered a flame-thrower who has made a gigantic leap in the bubble. They mined Duncan Robinson out of absolutely nowhere and now have one of the greatest shooters the league has ever seen. They made the right decisions on veterans everywhere, from Andre Iguodala to Jae Crowder to (why not!) Solomon Hill.

They all combine to get superstar-level production. Herro sometimes erupts, and his Jamal Murray-like three-pointers off screens are deadly sources of offense. Dragic has been their best and most consistent offensive player for much of the playoffs. Butler, as everyone knows by now, is a certified bucket who also is a smart cutter and underrated facilitator. Robinson is the league’s deadliest specialty player. Adebayo playing as the roll man in pick-and-rolls was dominant against Boston.

The best comparison for this Heat team is not the famous egalitarian anomaly of the 2004 Pistons, though. It’s the 2013-14 Spurs, the team that legendarily battled the Heatles. This Miami team does not approach those Spurs teams in terms of quality, but the feeling is similar, with a Hall of Fame coach and a lineup filled with players that perform their roles perfectly.

Butler might be Kawhi Leonard in this comparison: a stopper of a small forward who gets big buckets in the clutch. (He also has a good shot at a Finals MVP.) The Heat don’t move the ball as fluidly as the Spurs did, and they may not have any Hall of Famers running things, but they do create a lot of points with unselfish passing. Adebayo, the league’s second-best passing big man, is at the center of it.

Against the Lakers, they have the pieces to make everything difficult. They can body Anthony Davis with any number of stout defenders. They can stay in front of LeBron James (Iguodala knows a little something about defending LeBron in the Finals), and they can hide mismatches with some zone and mobile switching. They’re never out of games with the quality of shooting they have.

There will be plenty of fascinating tactical points to unpack in this series. It’s a battle of superstars — with the Lakers’ occasionally problematic supporting cast an obvious X-factor — against a more cohesive unit. The Heat have reaped the benefits of their culture and player development. Now, as a uniquely well-built team, they take a shot at a superstar aiming for history.