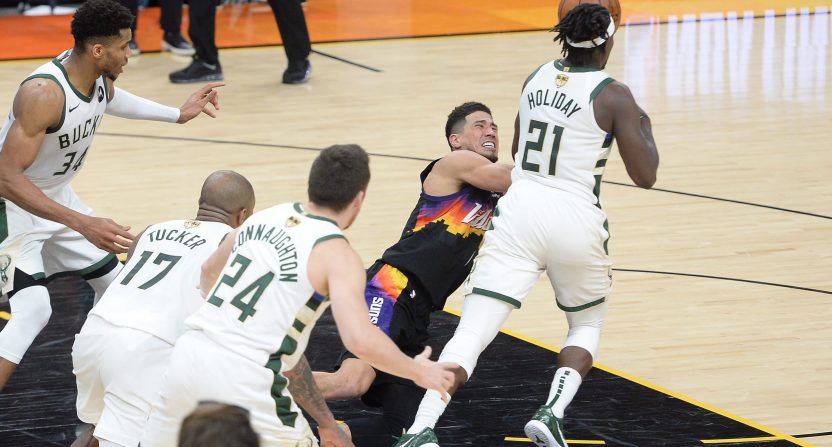 The Milwaukee Bucks took down the Phoenix Suns 123-119 in Game 5 of the NBA Finals on Saturday night in Phoenix, and now have a 3-2 series lead. Here are our main takeaways:

3 in a row for the Bucks, and they can close it out at home

The Bucks appeared to be in big trouble after a 2-0 series deficit. With how Games 1 and 2 looked, it was hard to picture the Bucks even getting a win in Phoenix. But the Bucks won two straight in Milwaukee, and then got the big win on the road in Game 5. And how they got the win was particularly impressive…

Phoenix dominated with a 37-21 first quarter — including 11 straight field goals made — in front of their home crowd. It looked exactly like how Games 1 and 2 had gone, and there was no reason to believe much would change.

And then the Bucks topped that with an incredible 43-24 second quarter to take a 64-61 lead into halftime. It was a remarkable response by Mike Budenholzer’s squad.

Bucks score 43 points in the second quarter and Giannis Antetokounmpo only had 4 of them. Suns now trail by 3 at halftime after being up 16 through one quarter.

This amazing Bucks play will be talked about for years

That’s especially the case if the Bucks win the title, of course.

Jrue Holiday was fantastic in this game for Milwaukee, scoring 27 points (12-of-20 from the field), dishing out 13 assists, and coming away with three steals. And he made the play of the game in the final seconds, showing off his skills on both ends of the floor.

Phoenix was in the process of trying to complete a late comeback in the final seconds, but Holiday ripped the ball away from Suns star Devin Booker, and proceeded to make a perfect alley-oop pass to Giannis Antetokounmpo. The Greek Freak flushed it home, completing one of the most incredible plays of this basketball season.

What made the play even more incredible was the confidence Holiday had to toss a dime in this spot; Milwaukee led by one in the final seconds, and there’s always the risk of a turnover on an alley-oop pass over a defender. But it was perfectly, gorgeously executed:

RIDICULOUS play on both ends by the Bucks! pic.twitter.com/z2xVypWPvi

The Suns lost despite an extremely efficient night on offense

So, how did the Bucks find a way to win this game? Their big three were fantastic, with Antetokounmpo, Holiday, and Khris Middleton all scoring at least 27 points and combining for 24 assists.

Bucks big 3 SHOWED OUT in Game 5

The Bucks open as 5-point favorites in Game 6

Oddsmakers like the Bucks chances to win the franchise’s first title in 50 years. But you can be sure that Devin Booker, Chris Paul, and the Suns will bring an effort like never before with their title hopes on the line. And if the Suns can find a way to get a win in Game 6, Game 7 will be back in Phoenix.

The series gets a two-day break before Bucks try to win an NBA title in front of their home crowd on Tuesday night.