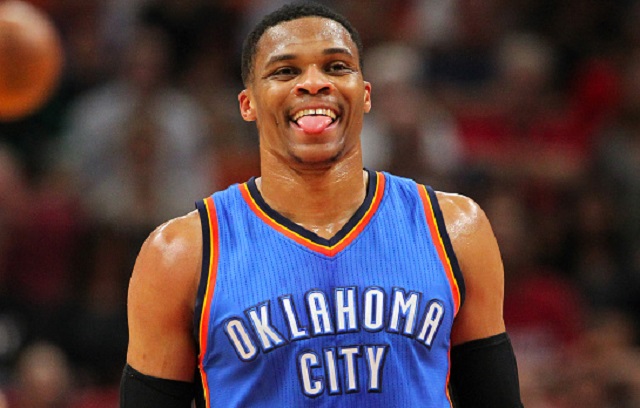 The NBA offseason is the best soap opera in sports. If you want the drama and intrigue to continue into this upcoming regular season, there is one thing you should definitely root for over the next few weeks.

If Russell Westbrook doesn’t sign a contract extension with the Oklahoma City Thunder, the NBA becomes a much more interesting place. Westbrook has until Oct. 16 to sign a five-year, $207 million extension with OKC. That offer has been sitting on the table like cold pizza since June. If the league’s reigning MVP doesn’t sign, he will become an unrestricted free agent after the season.

With teams starting training camp, Westbrook was asked if he will sign the extension.

“Like I said, this is the place I want to be,” he said on Monday. “I love being here. I’m excited about this season. Obviously there are a lot of new changes. From that, I’m going to leave it there.”

Let’s talk about the summer of 2018. Potentially, these big names could be on the market: Westbrook, LeBron James, Kevin Durant, Paul George, Carmelo Anthony, Chris Paul, DeMarcus Cousins, Isaiah Thomas, and Dwyane Wade. That sets the stage for what could be the craziest NBA offseason ever in terms of player movement.

Right now, only one team has three of those megastars on its roster.

The Thunder’s acquisitions of George and Anthony are not just about fielding a competitive team for this season. It’s about convincing Westbrook to stay. Losing Durant last summer was painful enough for this small-market team. Losing Westbrook would be catastrophic. OKC general manager Sam Presti made the Anthony deal over the weekend, hoping it will nudge Westbrook to sign soon.

If that doesn’t happen, get ready for a wild ride. OKC essentially becomes a one-year experiment. The Western Conference has gotten better with the Thunder and Houston loading up to challenge Golden State. None of these moves are likely to put a dent in the Warriors’ dominance, but it will be fun to watch.

This is the ultimate test of chemistry because Westbrook, George and Anthony all ranked among the NBA’s top 20 in usage rate. They all like the basketball in their hands – a lot. (The Warriors, who share the ball as well as any team in NBA history, only had one player in the top 20 – Stephen Curry).

Westbrook won the MVP with the NBA’s all-time record in usage rate (41.7). He set the league’s single-season triple-double record (41), largely because his supporting cast wasn’t good enough. Westbrook’s numbers are going to take a dip with the presence of George and Anthony. He should, however, be more efficient, and the career 43.3 percent shooter could have his highest ever field goal percentage.

Can Westbrook, George and Anthony coexist? George is the best two-way player among the three. He’s a three-time all defensive team member. George also shot a career-best 46.1 percent and is a career 37.0 percent shooter from 3-point range. He played very well for a mediocre Indiana Pacers team, so he should fit in seamlessly.

Anthony is the bigger question. He’s strictly an offensive player and at the age of 33 is entering the back nine of his career. Anthony is a gifted scorer, but also a volume shooter and a ball stopper. For his career, he has averaged 19.1 shots per game. Is he willing to sacrifice? Anthony’s best strength is his ability to create offense in late-game situations. Of course, he was always the No. 1 option in Denver and New York. Westbrook, George and Anthony are going to have to figure it out.

“We haven’t won a championship and we see that as our ultimate goal,” Anthony said.

The man responsible for putting together a game plan for all this is Billy Donovan. The OKC coach could be looking at a no-win situation. If the Thunder struggle, he’s going to take the blame. If the Thunder has a strong season, he isn’t going to get much of the credit, unless they somehow, someway stun Golden State.

“These guys have been in the league for a long time,” Donovan said. “They’ve had a lot of individual success. Team success in different situations… We’ll try to figure out how we can be the best version of ourselves.”

There’s a good chance that Donovan could also be in his final year. If Westbrook goes, George and Anthony are assuredly gone. And that might mean Donovan will bolt too, especially if some prime college jobs open up. Of course, the college hiring season is in March, so Donovan could leave early or simply sit out a year and weigh his options.

So much uncertainty will make OKC as interesting to watch as Golden State, Boston and Houston this season. In a sport where the players have the power, Westbrook’s decision might be the most influential – other than LeBron’s.

If it’s just about the money, Westbrook would have signed a long time ago. But why not wait and use your power? Make OKC work for you the way LeBron has made Cleveland management work for him.

Thunder management has done seemingly everything possible to keep Westbrook. But even if the team has a great season, that might not be enough. Remember, Durant left after reaching the Western Conference Finals. Westbrook might just decide that it’s time for a change as well.

Westbrook can happily find a new team and a new city. Now… where would he possibly go? Westbrook saw Durant leave to form a super-team. Might he do the same by going to the Los Angeles Lakers? It’s not inconceivable that Westbrook AND George, both California natives, go to L.A. And guess who else might be there? LeBron.

Imagine it: the Golden State Warriors vs. the Lakers of LeBron, Westbrook and George in the 2019 Western Conference Finals.