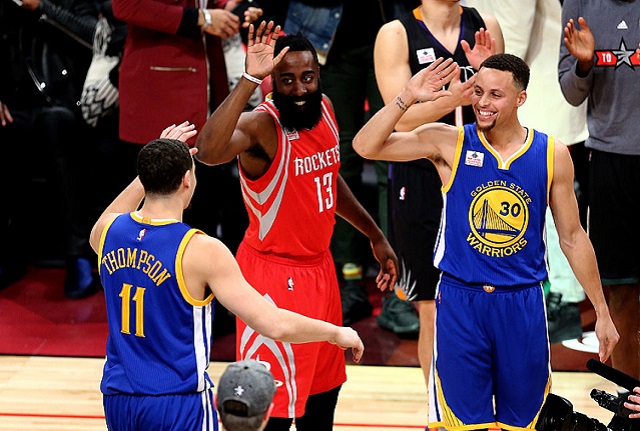 Last week, when the Golden State Warriors won their record 73rd game, they did so by following a blueprint that is becoming more and more common in today’s NBA.

Shoot a lot of threes. Shoot even more threes. And when it doubt, shoot more threes again. And in doing so, find a way to outscore the opposition.

The Warriors were 20-for-47 from downtown in their final regular season game and soon-to-be two-time MVP Steph Curry was 10-of-19 from three-point range by himself. It was only the 10th time since the 1983-84 season that a player had attempted at least 19 threes in a game. As a team, Golden State tied for the second-most attempts in a game during the same timeframe and the most since 2009.

The NBA is a much different game today than the trench warfare style of basketball that dominated the mid-to-late 90s and early 2000s. When the 1995-96 Chicago Bulls set the previous mark for most wins in a season, the league averaged 99.5 PPG — the first time the NBA as a whole was below 100 points per game since the 1956-57 season.

The Dubs are known for #SPLASH, but last night they displayed plenty of #SMASH. What was your favorite dunk?https://t.co/6oZgNFTCGU

Today’s NBA is more free-flowing and offensive-minded — led, of course, by the Golden State Warriors. When it comes to any sport, there’s always a sense of “follow the leader” in which teams try to replicate what others have found successful. And as the Warriors go, so goes the rest of the league. However, the NBA’s rebirth of offensive basketball also has systematic sources as well.

This year, 23 of the league’s 30 teams averaged greater than 100 PPG. The lowest-scoring team in the league was the Los Angeles Lakers, who averaged 97.3 PPG. In the 2003-04 season, that would have put the Lakers fifth in the league in scoring, when only two teams cracked the century mark.

It’s clear that there are deeper reasons for the NBA’s upswing in scoring.  Let’s take a look at how we got here…

Much of the NBA’s scoring rise is due to some progressive rule changes and enforcements towards the latter part of the last decade, with the purpose of opening up the flow of the game on the offensive end. The low point for offensive basketball came during the shortened 1998-99 season where teams only mustered 91.6 PPG. In fact, the NBA went 13 straight seasons with scoring in double figures from 1996 to 2008.

It’s a fact of life in any sport that fans love scoring. That’s why every league always makes rule changes to increase scoring and never to decrease scoring. (Sorry, all you fans of lockdown pressure defense and drawn charges.) Over a decade later, the Spurs are still trying to shake the “boring” label, thanks to NBA Finals series like 2003 and 2005 when they routinely won games in the 70s and 80s. The NBA faced offensive futility in the “glory days” of the Jordan Era, too. In the 1998 NBA Finals, no team got above 100 points and the Jazz managed a record-low 54 points in one game. Something clearly needed to be done to increase the entertainment level of the fans and the numbers on the scoreboard and the NBA obliged. 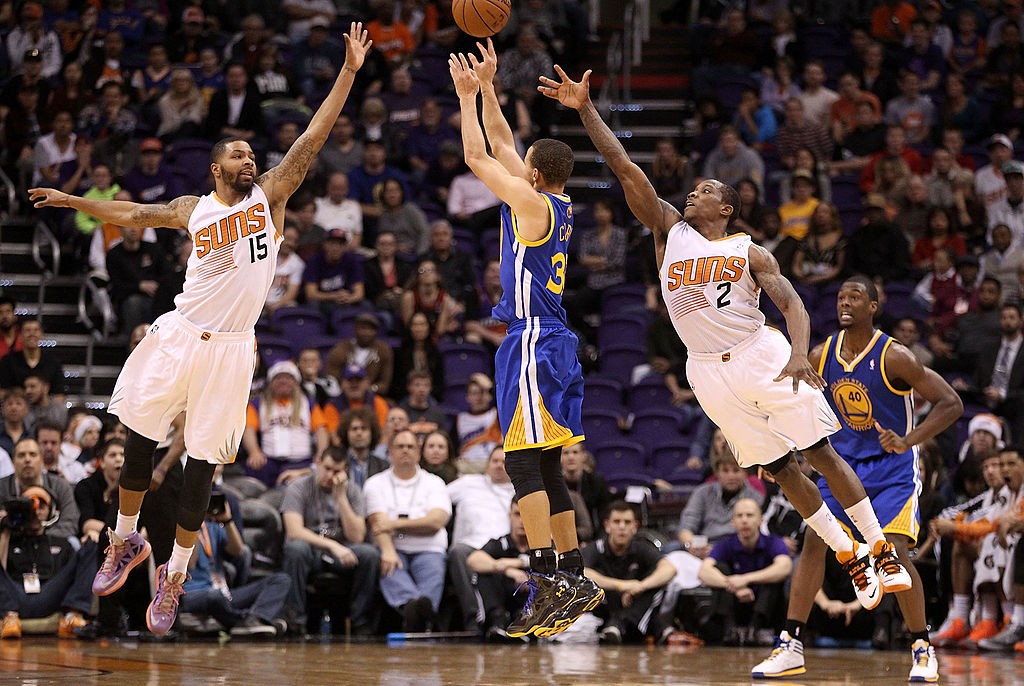 It’s not just changes to the rulebook, though. Another contributing factor to the NBA’s rise in scoring is the use of advanced statistics and a greater understanding of the value of the three-pointer. Each of the last five seasons have seen teams average a record number of three-point attempts, culminating this year with the number of attempts rising to over 24 per game:

The old way of thinking was that teams could not “live and die by the three” and the more free-wheeling, run-and-gun style teams couldn’t win championships. The Warriors have proven those theorists to be flat-earthers. Golden State set the all-time wins record by hoisting a league leading 31.6 threes per game and making 13.1 of them.

It’s not just those top teams, though. The three is a way of life for successful teams in the modern NBA. Of the top 10teams in three-point attempts this season, only Philadelphia failed to make the playoffs.

However, it’s the number of attempts for each which shows how analytics have changed the game to increase scoring. With regards to effective field goal percentage (counting a three as proportionally worth more than a two), 2015-16 was the best shooting season the league has ever seen with an eFG of 50.2 percent.

To show how much the understanding of the three-pointer has changed, when it debuted in the 1979-1980 season, teams only averaged 2.8 three-point attempts per game. Only two teams attempted more threes in that first season than Steph Curry did this year alone!

Teams are playing faster as well. The 95.8 possessions per game, per team was the highest mark in the NBA since the 1992-93 season as well. We’re still a long way from the days when the NBA was a track meet in the 1970s and 1980s (when teams would routinely average over 100 possessions per 48 minutes). Nevertheless, it’s also a substantial increase from those late-90s slogs in which possessions per game got as low as 88.9 in the 1998-99 season.

Again, much like shooting more threes, this is a trend that is increasing. Pace has increased in each of the last five seasons in the NBA.

The biggest question remaining is this: is this a trend that will continue?

Sports are like society, it’s evolutionary. If we truly are on the verge of The Curry Era, then these trends will only continue to grow. As young fans and basketball lovers dream of being the next Steph Curry, and as coaches and front offices continue to emphasize the importance of the three, long-distance shooting and scoring should continue to rise.

All stats in this article come from Basketball-Reference.