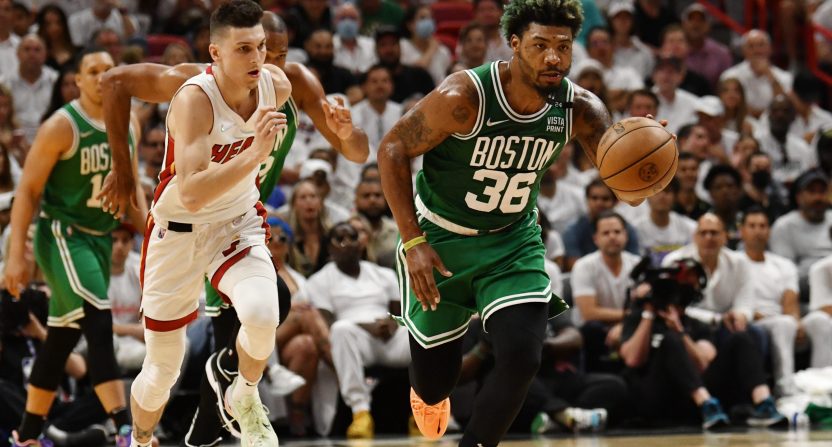 Jimmy Butler led the Miami Heat to a Game 1 victory in the Eastern Conference Finals, but the Boston Celtics had an excellent response in Game 2.

The Celtics' 25-point lead at the break is the largest halftime lead for the Celtics in a road playoff game in franchise history (excluding Bubble games).

This is the 17th time in Celtics postseason history they have scored 70 points in the first half. pic.twitter.com/vJ1IlLkLah

The return of Marcus Smart (mid-foot sprain) and Al Horford (COVID protocols) was huge for Boston on both ends of the floor.

"A little shake and bake" by Marcus Smart ☘️#NBAConferenceFinals presented by Google Pixel on ESPN pic.twitter.com/4K1FzKBBeQ

Horford didn’t light up the box score, but he still went 4-for-4 from the field (2-of-2 on threes) and chipped in 10 points, along with making an impact defensively.

Marcus Smart and Al Horford returned to the Celtics lineup and made big contributions.

Horford held the Heat to 2-9 FG and 4 TO as a primary defender.

Smart led the Celtics with 12 assists; Boston was 12-15 FG off his passes. He also held Miami to 3-11 FG as a primary defender. pic.twitter.com/LSgPLCj8AI

Boston was able to split the first two games on the road, and they showed how much better they are when Smart and Horford are a part of things. And now the Celtics have home-court advantage, with three of a potential five remaining games in Boston (if the series were to go seven games).

Additionally, Heat starting forward P.J. Tucker suffered a knee injury that has his status in question.

Sources: P.J. Tucker sustained the injury early in the first quarter and attempted to play through it. With a short turnaround in this series and the matchup problems Boston presents, an absent Tucker would be devastating for Miami.

The Celtics open as 6.5-point favorites in Game 3, and they’re now clear favorites to win the series.

Here’s a look at how the basketball world is reacting to Boston’s Game 3 win:

Marcus Smart makes a huge difference for them ! He Hoopin🔥

The Celtics have only lost 2 straight games once since January.

They rested 4 starters in that loss. pic.twitter.com/aQ61BefPcx

Highest playoff +/- off the bench in the play-by-play era:

The return of Marcus Smart led the Celtics to a blowout victory over the Heat! Smart was the key difference-maker – he had 24 points and was a great facilitator tonight, adding 12 assists and 9 rebounds. His defense on Jimmy Butler was also outstanding.

This game is … OVER. If the Celtics keep shooting like this, they will win the NBA championship.