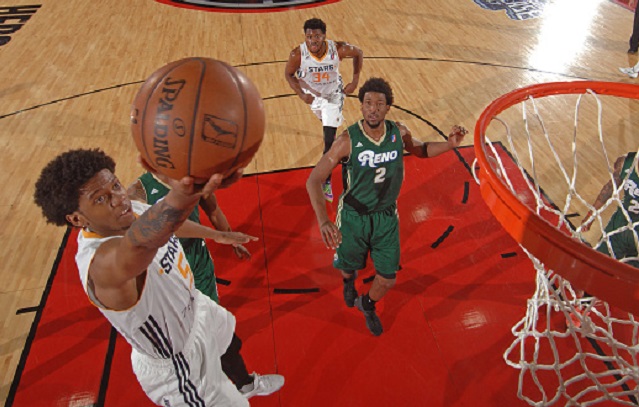 If you haven’t been paying attention, the NBA’s D-League is growing — and at an impressive rate.

Back in 2001, the then-NBDL launched with eight teams as a way to start a true minor league for the NBA. The franchises had wacky names like the Charleston Lowgators, Greenville Groover and Roanoke Dazzle, among others. They didn’t even have individual logos at first. Every team was simply owned and operated by the NBA.

Much has changed since that initial season, and the growing D-League seems to be marching toward its “Manifest Destiny”: a team for every NBA parent club. For the 2016-17 season, 22 teams took the court, with at least three more joining by 2019. Of the current group, 16 have a single affiliation with a NBA parent club. That shift in business model has been instrumental to the league’s rapid expansion.

It all started with the Los Angeles D-Fenders’ (soon-to-be South Bay Lakers) launch in 2006 as the first team to be owned exclusively by a single NBA club. Despite the Los Angeles Lakers’ heavy reliance on free agent pick-ups in its recent history, they were forward-thinking in this respect, setting an example many of the league’s teams would follow soon after.

More progressive clubs like the San Antonio Spurs and Oklahoma City Thunder were quick to buy over the next couple years, so that they could continue their respective investments in scouting and development unencumbered by an unaffiliated organization sharing resources and minutes. Single-affiliate systems would become the norm quickly, giving birth to the current rash of expansion.

Five brand new franchises – owned by the Knicks, Raptors, Hornets, Nets and Bulls – have launched since 2014, and three of those arrived in 2016 alone. The 2017-18 season will bring two more, owned by the Magic and Grizzlies, respectively. This week, the Minnesota Timberwolves purchased the Iowa Energy (they previously split the team with the Grizzlies), while Memphis announced their (aforementioned) own team in Southaven, Mississippi. next season.

The Atlanta Hawks (Lakeland, Georgia.) and Milwaukee Bucks (considering several cities in Wisconsin) are next up, with the Hawks confirmed for 2019 and the Bucks still up in the air on timing.

That still brings the potential total to 26 teams by 2019 or 2020. And while this growth may all seem aggressive, it’s actually based in some fundamental changes in how the NBA has done business in recent years:

A hoops haven… in South Dakota? @NBATV gives an inside look at the @SFSkyforce, a fixture for nearly 30 years! #BeyondThePaint pic.twitter.com/CNJtg7MUnE

The NBA’s television deal with TNT and ESPN, which went into effect this season, more than doubled broadcasters’ payout to the league, which obviously lines the pockets of its member organizations. As a result, the value of the average NBA team went up 74 percent to $1.1 billion in just a single season – a number reported by Forbes, which has been calculating sports franchise values since 1998.

Some of that money has obviously gone into player salaries and the steep increases we’ve witnessed for contracts given out over the past two offseasons. But to turn that new money into smart money, teams have realized there’s value to investing in talent – from players to coaches to scouts, executives, marketing staff, etc. At the D-League level, they’re able to groom the organization of the future, without taking the same hits they would at the parent club level.

The discounts of the D-League even extend to the player salaries, though with new caveats under the incoming collective bargaining agreement. Two-way contracts allow for additional NBA roster spots to be used on players who can shuttle back and forth between the D-League and the NBA. So while the minimum salary is still just a paltry $19,000, those two-way salaries are anywhere from $50,000 to 75,000 annually. It’s now a much different story being an aspiring NBA player in the D-League, at least in terms of potential income.

That shuttling also gets to one of the biggest keys to the D-League’s recent growth and continued success: proximity.

D-League gets closer to home

At the start, the D-League was placed in Southeastern markets with a passion for basketball, but few professional outlets for it. Then as the league spread its wings, it started exploring underserved markets around the country – Arkansas, Anaheim, Albuquerque, Idaho – to try to grow the game in those places.

The newest shift, while expensive to buy and start a team initially, is based on the cost-savings of affiliate club proximity. Here, it’s taken some cues from the NHL over the far more expansive MLB farm system.

In the D-League, many of the newer or relocated teams are all a stone’s throw from the parent club to cut down on the costs associated with sending players up and down. The Knicks’ D-League team is in White Plains, New York, right across a bridge. The Raptors’ affiliate is in nearby Mississauga, Ontario. Charlotte placed the Swarm in Greensboro, North Carolina.

The new clubs not only carry the players and general market of the parent franchise, but can use their own uniform colors and even an entirely different name. It’s a way for the D-League teams to create new fans within the same geographic footprint while still allowing the minor league team a fan base all its own.

The D-League shares a little more in common with the American Hockey League in this way, prioritizing smaller, close cities over unserved markets for the NHL. There are exceptions, of course. But most of the AHL’s teams are relatively close to their respective parent clubs. And many share aspects of their branding to create a common link.

In Triple-A baseball, it’s a little different for the Independent and Pacific Leagues, respectively. There are exceptions here too, but many of these clubs have been around as long as the major league franchises – if not longer. Their heritage and lack of proximity takes precedence over shared branding.

From making the @Austin_Spurs via open tryout to flying high with the @Spurs… the RISE of @tharealJSimms!#BBVARisingStars #NBAAllStar pic.twitter.com/tDxQikGz7c

The NBA’s growth over the last decade or so has been one of sports’ biggest success stories. The league’s continued upward trajectory, however, could hinge in part on what the D-League can eventually turn into. This “Manifest Destiny” isn’t the only end goal to measure the D-League’s accomplishments by. But it will certainly be the most visible.