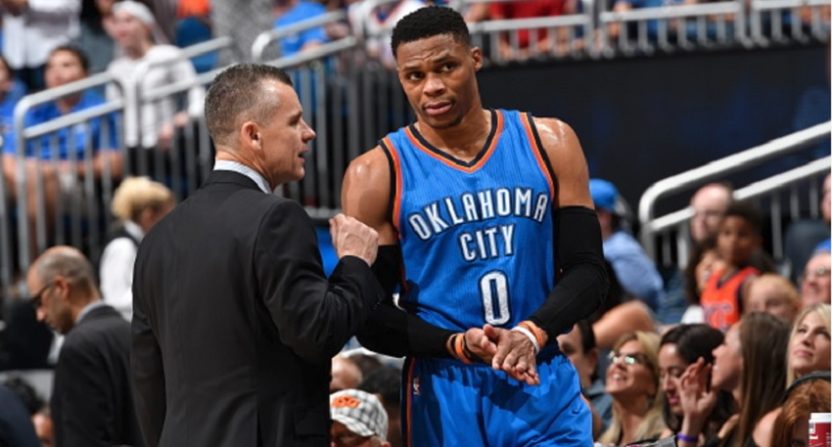 In Oklahoma City, they’re ready to party like it’s 2015-16 when the Thunder appeared to be on the brink of returning to the NBA Finals. The acquisition of Paul George has fans understandably giddy. They have an All-Star to pair with league MVP Russell Westbrook. They have a legit shot to reach the Western Conference Finals.

Russell Westbrook when he found out Paul George is on the way!!! ? pic.twitter.com/cY7IxMNz9W

Enough to seriously challenge the Golden State Warriors? Ha. Heck, no. The Thunder might be the fourth-best team in the conference. At least for now, they have hope. However, that hope might be short-lived. OKC could be staring at Armageddon next summer.

If OKC fans thought losing Kevin Durant was painful, guess what dystopian future possibly lies ahead? There is a distinct possibility that Westbrook, George and coach Billy Donovan could all be gone. Westbrook and George will be free agents. If they bolt, there will be little incentive for Donovan to stick around. He would likely make a return to college, where a number of primo jobs could be open.

The biggest moving piece in this scenario is, of course, Westbrook. He earned himself a lot of goodwill by signing an extension with the Thunder last year in the wake of Durant’s departure. What he actually bought himself was time. Time to see what he could do without Durant and to see what management could do to help him.

Westbrook enjoyed one of the most statistically impressive seasons in NBA history. He averaged a triple-double en route to winning the MVP. However, being a one-man gang didn’t result in meaningful winning. Westbrook’s usage rate was unprecedented. Michael Jordan’s highest rate was 38.3 for a Bulls team that went 40-42. LeBron James has never had one higher than 33.8.

Westbrook’s was a flabbergasting 41.7 for a team that went 47-35 and lost in five games in the opening round of the playoffs. The next highest usage rate last year was DeMarcus Cousins (36.5). Remarkably, Westbrook maintained his efficiency, leading the league in PER (30.6). His insanely high usage rate figures to take a dip with George joining the team. But is Westbrook going to happier sharing the ball – and credit – more?

Westbrook and Paul George blaming the loss on each other after shooting under 40% pic.twitter.com/Sk6iJa2yvR

Having George for a probable one-year rental is an interesting strategy. It seems like a forgone conclusion that he’s going to sign with the Lakers next summer. George is a good player but will teaming up with Westbrook make him better? There is also the possibility that the Thunder could trade George mid-season and get some assets in return. Will all this sway Westbrook? The money is a factor: a supermax deal is enticing.

According to USA Today’s Sam Amick, Westbrook has a lucrative offer from the Thunder that merely requires his signature. He can sign a five-year extension for $217 million up until the start of the regular-season. If he doesn’t, he – along with George – will go into 2017-18 as his walk year.

For George, this is his chance to make a deep playoff run. But there’s no guarantee of that in the loaded Western Conference. Yes, OKC is improved. But Golden State, Houston and San Antonio could all be better as well. George will have to learn how to play with Westbrook. He also could be dealt if OKC has a disappointing season.

This all brings us to Billy Donovan. When he was hired in 2015, he was gifted the best job a college coach has ever had. Donovan had two of the league’s five best players: Westbrook and Durant. And in his first season, he guided the Thunder to a Western Conference Finals appearance and a 3-1 series lead on the seemingly unbeatable Golden State Warriors.

That might be as good as it gets for Donovan. He lost Durant and now might be on the verge of losing Westbrook and George. Donovan is a confident and accomplished coach, but that might be too much for his ego. Why stay with a team that is trending down? Why not return to college where the coach reigns supreme and has power over his roster.

Donovan has three years remaining on his contract. When the Indiana University job opened up in March, he said:

“I love it here. I love the guys I work with every day. I love our staff, the organization. As far as I’m concerned, my commitment is totally here and doing the best job I can while I’m here.”

Donovan might change his mind. If that happens, he would be the most attractive option out there for the 2018 college hiring cycle. What jobs could be available in the near future?

There are two blueblood programs with aging coaches facing difficult circumstances: Louisville and North Carolina. Rick Pitino, 64, and Roy Williams, 66, have won multiple championships. They are also dealing with NCAA issues that could lead them to retire soon.

At Duke, Mike Krzyzewski is 70. How many seasons does he have left? At Texas, Shaka Smart is young (40), but has been unimpressive in two seasons. How much more time will he get?

If Donovan opts to return to college next year, the timing might not be ideal. The NCAA job market is hottest in March. OKC’s season probably won’t end until May. Then Donovan might wait until July to see what Westbrook does. That means Donovan won’t be available for hire until the summer. Of course, he could choose to sit out a year and wait until March 2019.

The best-case scenario for the Thunder is for Westbrook and Donovan to both stay. Maybe OKC can add suitable free agents next summer. If not, the franchise could be looking at its worst season since it arrived in Oklahoma in 2008.