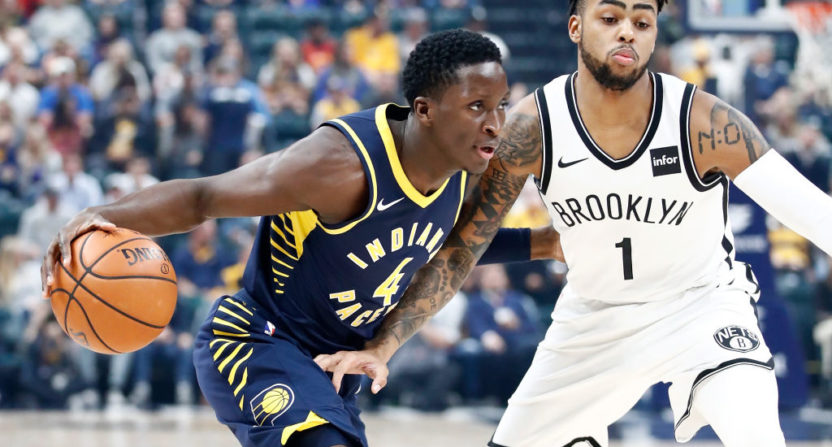 The Pacers aren’t going to be a good team. They’re just not. Trading away Paul George, a top-10 player in the NBA, and getting back two players who are very much not-top-10 players in the NBA in return guarantees that.

Rather than abject tanking, though, which is misery for everyone, the Pacers have seemingly attempted to change their entire team identity in one offseason. Having played a stodgy, defense-first, Paul George-centric style for years under Frank Vogel (and one year under current coach Nate McMillan), the Pacers talked all summer and preseason about how they wanted to play an uptempo. running game.

New acquisitions Darren Collison, Victor Oladipo, and Cory Josephfit that mold, as does Lance Stephenson, arguably only dangerous in transition. The Pacers also have a young, fast big in Myles Turner, Indiana’s best chance for a star player to replace George. Turner can shoot, though, and in theory an uptempo game would suit his abilities nicely. Amare thrived in Phoenix, after all. Glenn Robinson III and Thad Young are also mobile.

But plenty of teams spend the offseason talking about how they’re going to try to get out and run more. It’s basketball’s cliche, the equivalent to baseball’s spring training ritual of players reporting in the best shapes of their lives. It’s another thing entirely to actually play that fast once regular season games start up.

The Pacers apparently meant it, though. They took down the Nets on Wednesday night, 140-131, which is a monster point total:

The Pacers and Nets combined to score 271 points tonight, the 2nd-most in a season opener in NBA history.

It was also the first time the Pacers had scored 140 points since 2010, before Vogel took over. And it wasn’t due to a fantastically played offensive game, those are rare this early in the season. Rather, it was almost entirely thanks to the pace of the game:

Frank Vogel tailored the Pacers offense to his roster, as he should have. The Pacers were one of the best teams in a league dominated by Miami’s superteam, but their style of play made sense. Roy Hibbert was somehow good, but he couldn’t run. David West was very good, but not fast. Paul George was still devleoping. It made sense to focus on defense and bruising post-ups in the halfcourt offense.

Now, though, there is no star player, no traditional big men. Just a roster full of athletic guards and wings, none of whom need to dominate the ball to satisfy either their egos or their talent. (Well, except for Lance, but he’s better in transition anyway. He also went 6-19 on opening night, because Lance.)

How does it look in practice? Let’s use an illustrative example of what the Pacers are trying to do.

It starts with, perhaps unsurprisingly, allowing an offensive rebound and a putback layup: 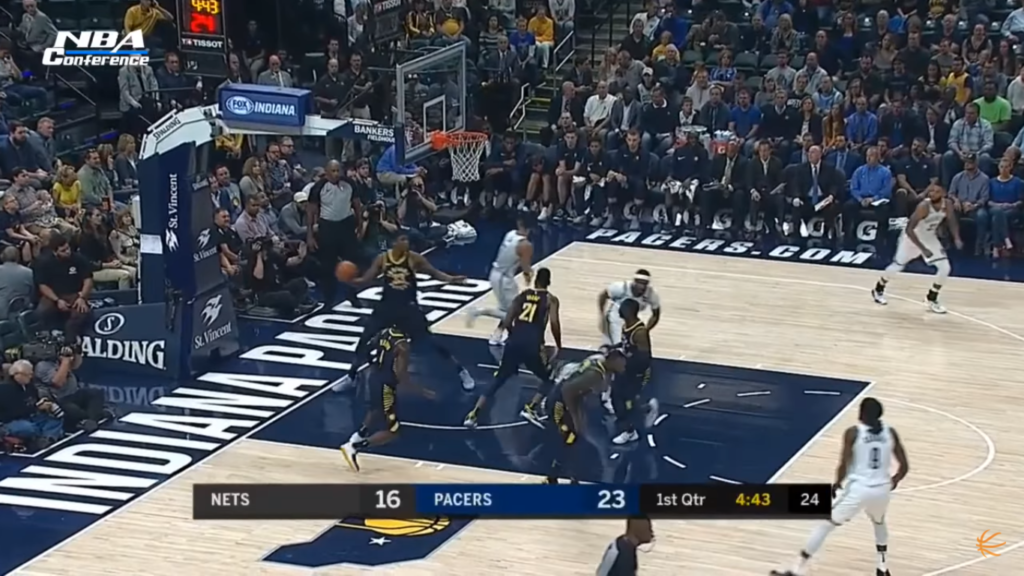 It’s unsurprising because on a running team, the first instinct for players is to leak out. That does leave you vulnerable on the offensive glass. In this case, prior to that still, Myles Turner and Darren Collison were lingering around the three-point line while Jeremy Lin drove and missed. That left Trevor Booker more free for his putback. As you can see, though, all five Pacers ended up in the paint in the end, while the Nets have three players behind the foul-line extended, and heading back on defense. 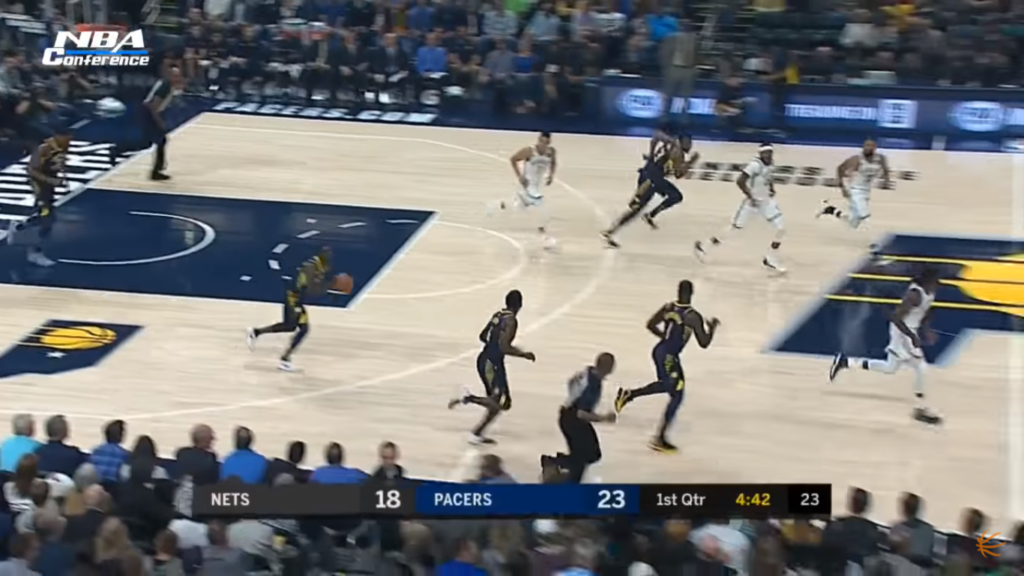 It’s not a ready-made transition opportunity, but the Pacers run anyway. Collison takes the inbounds from Turner, but immediately pushes it forward to Oladipo, while Stephenson and Young fill lanes. 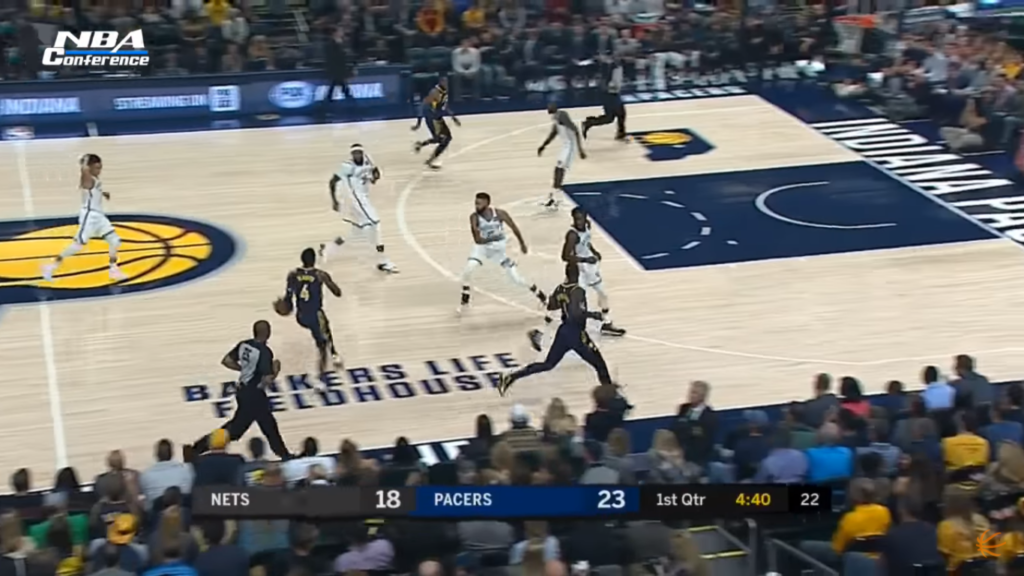 The initial break doesn’t offer any numbers, as all five of the Nets get back across the halfcourt line while two Pacers remain in the backcourt. Oladipo doesn’t force the attack here, recognizing that the Nets are actually in a decent position to collapse on a drive. 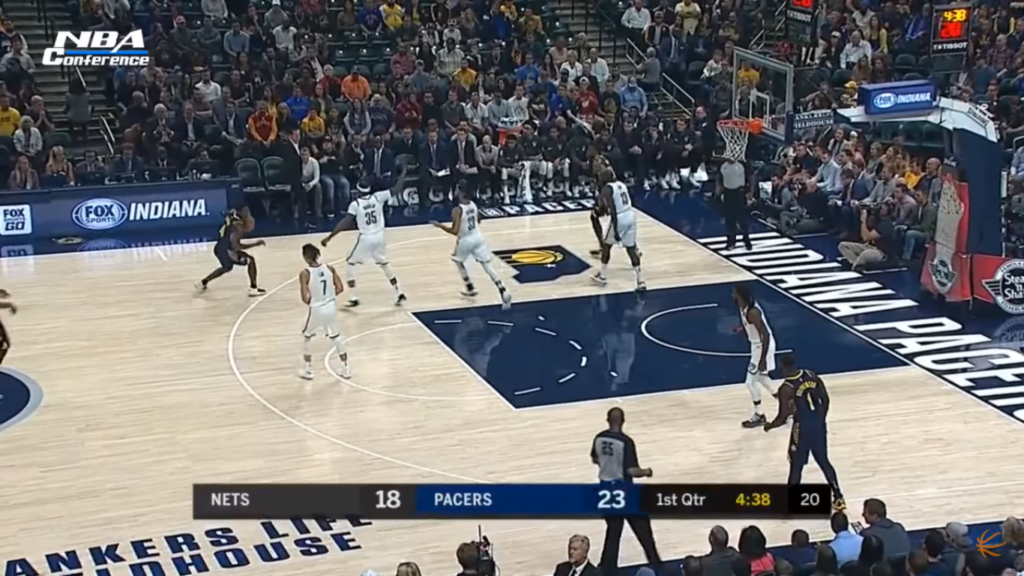 Instead, Oladipo dribbles left, and we see how the tempo can have an effect on a defense even if it gets back in time. In their hurry, the Nets are a bit confused; Trevor Booker attempts to pick up Oladipo even though Allen Crabbe is right there. Myles Turner is just coming into the frame across halfcourt. 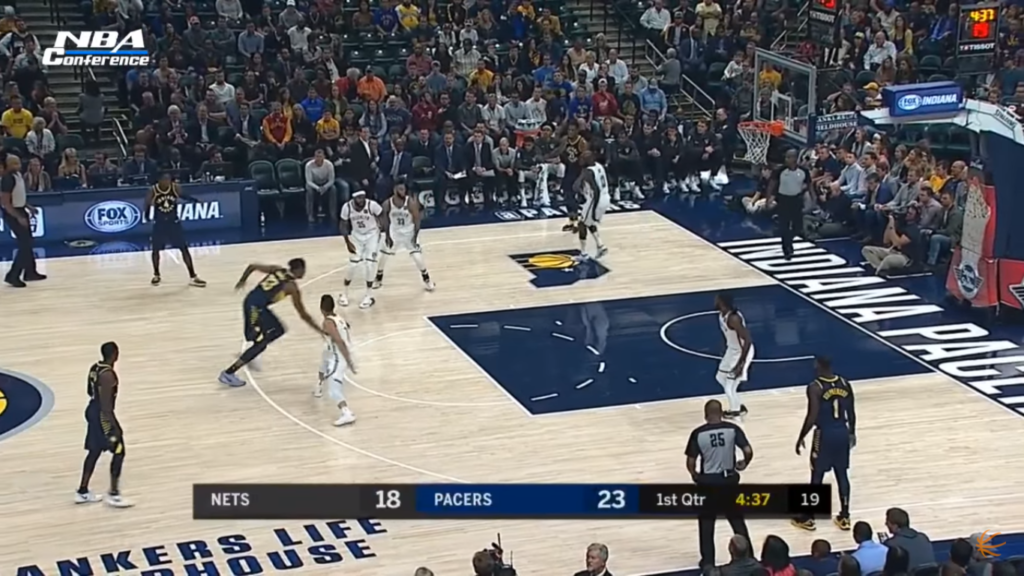 Oladipo’s probing forced an odd set of crossmatches, a series of events that sucked in Booker and Crabbe, while a trailing Myles Turner went to the top of the key. Had their been a rim protecter underneath, Turner is a threat to shoot from there; in this case, though, he’s got a wide open lane in front of him. My favorite thing about that picture is Allen Crabbe looking at the basket, as if he’s trying to will an extra defender into existence: 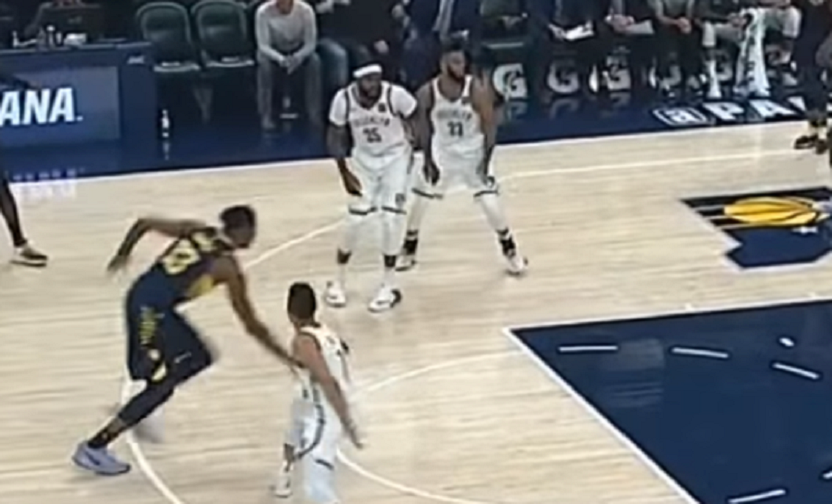 He’s not able to do that, although DeMarre Carroll does an admirable job with a flyby challenge that’s nowhere near enough to stop Turner from driving in and throwing down hard: 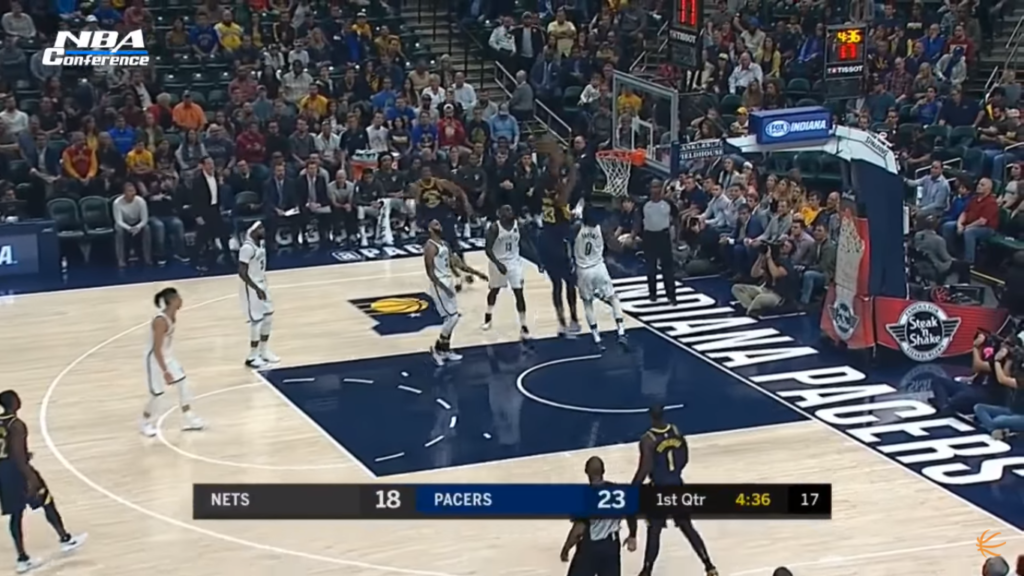 Here’s how that looks, full-speed:

That’s less than eight seconds after a made layup with the defense pretty much back. It took five total Indiana dribbles to create the dunk. That’s the kind of advantage tempo can give you, if you have the players to run it.

It’s not a magic strategy, of course. The Pacers are still probably going to be bad, although bad in the Eastern conference might still mean flirting with the playoffs. But it’s an identity, and one that the Pacers haven’t had on offense in a very long time. Credit Nate McMillan and general manager Kevin Pritchard for trying something, and at the very least making the team fun to watch.

The new jerseys help, too.