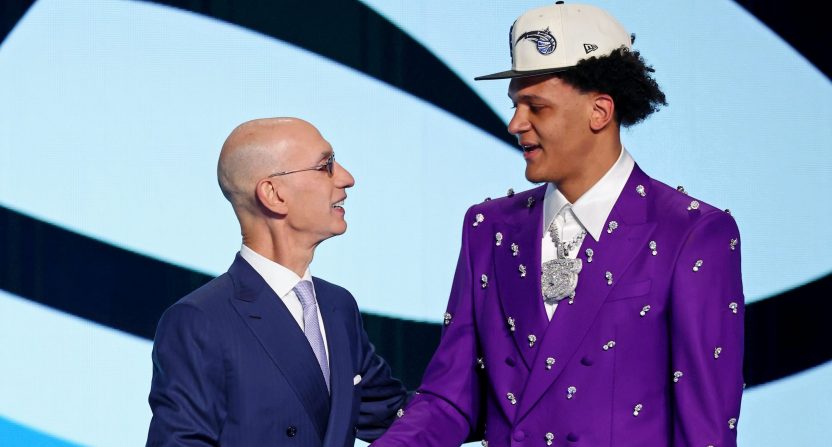 The Orlando Magic ended weeks of speculation on Thursday, selecting Paolo Banchero from Duke with the No. 1 pick of the 2022 NBA Draft.

In some years, the No. 1 pick is clear, but that was not the case this year. Auburn forward Jabari Smith Jr. and Gonzaga center Chet Holmgren were both candidates for the top spot, as well. But in the minutes leading up to the draft, Banchero became the leading candidate. Shortly after the draft began, the Magic made things official, selecting the Duke freshman first overall.

The Orlando Magic select Duke's Paolo Banchero with the No. 1 overall pick in the 2022 NBA Draft! 🏀 pic.twitter.com/STn4znHccI

Magic got a star ✨

Orlando selects Paolo Banchero with the No. 1 pick in the 2022 #NBADraft! pic.twitter.com/csaolv3fJN

The hoops world had a lot to say about the 6-foot-10, 250-pound forward going first overall. Feelings were mixed.

Paolo Banchero is made for the bigtime.

The No. 1 overall pick recorded 15 points and 10 rebounds in his NCAA tournament debut – the 3rd Duke player to do so during the Coach K era (R.J. Barrett, Jayson Tatum). pic.twitter.com/MeeKCk3Fyt

Paolo Banchero is the son of WNBA star Rhonda Smith.

He was a consensus 5-star, ACC ROTY at Duke, and the first active college player featured on NBA 2K.

At 19, he believes he’s the best player in the draft.

I feel a little hopeful but also have a sense of doom.

The number one pick in the draft.

Greatness at every stage, and it’s only up from here. Another chapter in the special career of Paolo Banchero.pic.twitter.com/s2aTFtST53

Given that Banchero was far from a consensus No. 1 pick, he’ll be under a tight microscope early in his career. This will be especially true if Holmgren, Smith, or both excel.

That said, there’s a lot to like about Banchero.

Banchero earned ACC Rookie of the Year honors, was a part of the ACC All-Rookie Team, and was a second-team All-American for the 2021-22 season. In his one season at Duke, Banchero averaged 17.2 points and 7.8 rebounds per game.