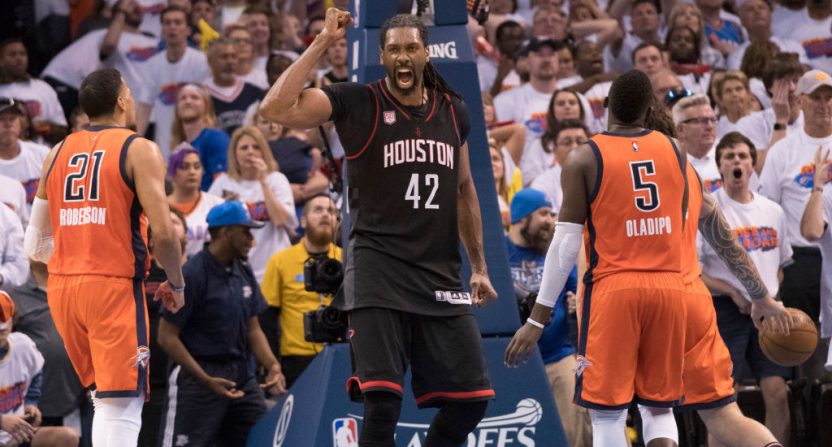 If the Houston Rockets are going to beat the San Antonio Spurs in the Western Conference Semifinals, they’ll have to do it without Nene.

On Monday, the Rockets announced the veteran center will miss the rest of the NBA Playoffs with a tear in his left adductor.

INJURY UPDATE: Nenê will miss the remainder of the postseason with a left adductor tear. https://t.co/hX0qVv5ljg pic.twitter.com/Ia9W0LQei2

Losing a backup big man might not seem like a huge deal, but Nene’s presence inside and the club’s lack of depth means the news will have a huge impact on the Rockets’ frontcourt.

First of all, outside starting center Clint Capela, Nene is the team’s only forward capable of really wreaking havoc at the five position. After averaging 9.1 points and 4.2 rebounds per game in the regular season, Nene has been locked in during the playoffs, averaging 10.0 points and 4.7 rebounds. While his effectiveness has waned against the Spurs, Nene was a big reason the Rockets took down the Oklahoma City Thunder in five games, as he averaged 13.6 points and 6.6 rebounds during the series.

With Capela and Nene, the Rockets had the slight edge on the Spurs’ Dwayne Demond-Pau Gasol combo. Now, their depth is depleted at the center position.

Nene’s minutes will likely go to a combination of Montrezl Harrell and Chinanu Onuaku. Harrell enjoyed a breakout season off the Rockets bench, but the 23-year-old has only played 18 minutes all postseason. Meanwhile, Onuaku hasn’t appeared in a postseason game at all. Both are natural power forwards, so the Rockets will have to do something creative to keep the Spurs out of the paint.

A possible (and likely) solution is going incredibly small. It’s an option that’s worked well for coach Mike D’Antoni this season. Pairing Harrell at the five, with James Harden, Eric Gordon, Trevor Ariza and Ryan Anderson has resulted in a staggering +20.0 point differential in just under 175 minutes together. Furthermore, D’Antoni can put Anderson at the five and role out a lineup featuring Patrick Beverly, Harden, Gordon, and Ariza—although, good luck guarding Kawhi Leonard—a lineup that would be all offense.

Beating the Spurs is one thing, but if the Rockets do advance without Nene, they’ll be in a heck of a lot of trouble against the Golden State Warriors (sorry Utah). Houston needs to be fully healthy to challenge the NBA’s best team—without Nene, they’ll be lacking a veteran who can bang in the paint and provide much-needed energy and presence. No, it’s not as bad as losing say, James Harden or Eric Gordon, but it hurts the Rockets more than you’d expect.

What’s going on with these NBA playoffs? Between Kyle Lowry, Tony Parker and now Nene, injuries are making a Cleveland-Golden State rematch inevitable. But, who knows? Maybe the Rockets can survive Nene’s loss and continue to roll with one of the NBA’s most fun offenses. Stranger things have happened.