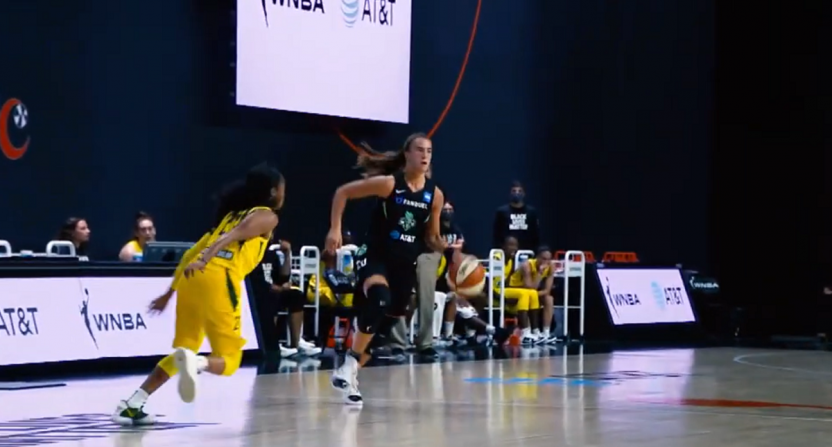 Sabrina Ionescu quickly showed why she’s one of the top women’s basketball prospects ever, when she scored 33 points, pulled down even rebounds, and dished out seven assists on Wednesday in her second career WNBA game. But on Friday night against the Atlanta Dream, the New York Liberty star rookie suffered an ankle injury in the second quarter that forced her to leave the game.

Ionescu had to be helped to the locker room, and you can understand why when you see video of the ankle roll:

Sabrina Ionescu was helped off the court after apparently rolling her left ankle. @espnW pic.twitter.com/w08XE82fhN

Ouch!! @sabrina_i20 Get healthy as soon as possible! 🙏🏾. Health is wealth

That certainly looked painful. Understandably, Ionescu did not return to the game, and the Liberty announced that she has an ankle sprain.

Update: Sabrina Ionescu has left the game with what has been reported as an ankle sprain.

Ionescu was the No. 1 overall pick of the 2020 draft after putting together record-breaking numbers in college basketball for the Oregon Ducks. Hopefully this is a minor injury and Ionescu can return to show off her tremendous talents for the Liberty very soon.

UPDATE: Ionescu has a Grade 3 ankle sprain and is expected to miss around one month, according to Shams Charania of The Athletic.

WNBA No. 1 pick Sabrina Ionescu is expected to miss approximately one month with a Grade 3 left ankle sprain and will continue to be re-evaluated, source tells @TheAthleticNBA @Stadium. https://t.co/bnuHGN7uIs