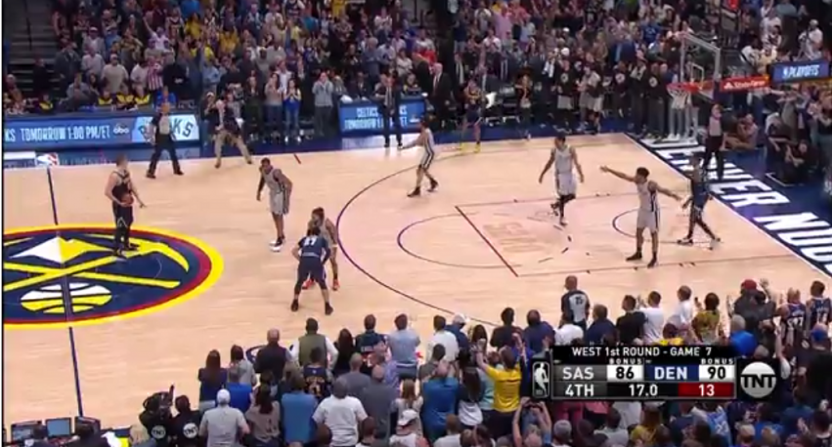 The Denver Nuggets held off a late charge by the San Antonio Spurs to win 90-86 in Game 7 of their first-round series on Saturday night. It’s the Nuggets’ first playoff series victory in 10 years.

So, that’s neat and of course the main story, but we’re going to focus on something that happened at the end of the game to cement the Nuggets’ victory.

San Antonio had a big comeback working in the final minutes (and even got the game to within two points with 52.2 seconds left). But with just over 30 seconds left and the Nuggets leading by four points, San Antonio’s DeMar DeRozan missed on a drive to the basket, and Denver’s Nikola Jokic came away with the ball with 28 seconds remaining.

So, the Spurs found themselves down four, with 28 seconds and counting to go. In this situation, the Spurs needed to foul immediately, or go for a steal and foul within a few seconds if the steal attempt failed.

Instead, the Spurs… did nothing.

The Nuggets wisely ran the clock down, and when the Spurs got the rebound on a Jamal Murray missed three, there were only two seconds remaining on the clock. Considering they needed to go the length of the floor *and* trailed by two possessions, the game was obviously over. DeRozan took a couple of dribbles and that was the game.

A closer look at the play shows Spurs head coach Gregg Popovich on the court screaming at LaMarcus Aldridge to foul.

one of the biggest reasons why earning home court still matters: so crazy loud in Pepsi Center at the end of Game 7 none of the Spurs heard the coaching staff screaming for a foul. Game ends. Season over. pic.twitter.com/mz4XoEHfM0

Pop (and Messina and Udoka) clearly yells to foul starting at about the 19-second mark and LaMarcus Aldridge never seems to notice, despite Bryn Forbes also appearing to yell at him. Then Pop sort of concedes and stops yelling with 11 seconds left. Bizarre sequence.

Popovich told the media that Aldridge clearly didn’t hear him yelling to foul, with the Pepsi Center crowd making it very hard to hear anything.

Pop on the non-foul: "well obviously he didn't hear it cause he didn't foul" pic.twitter.com/0yNuKmQWEb

Still, a seven-time All-Star shouldn’t need his head coach telling him that he needs to foul in that situation; it should be common basketball sense.

Now, even if the Spurs foul, the Nuggets probably make at least one free throw and go up five or six points in the final 28 seconds. The odds would’ve still highly been in Denver’s favor. But the Spurs would’ve at least had a chance, in Game 7 of a playoff series, and instead they just punted it by letting the clock run out.

The Nuggets definitely aren’t complaining, and they advance to take on the Portland Trail Blazers in the second round.