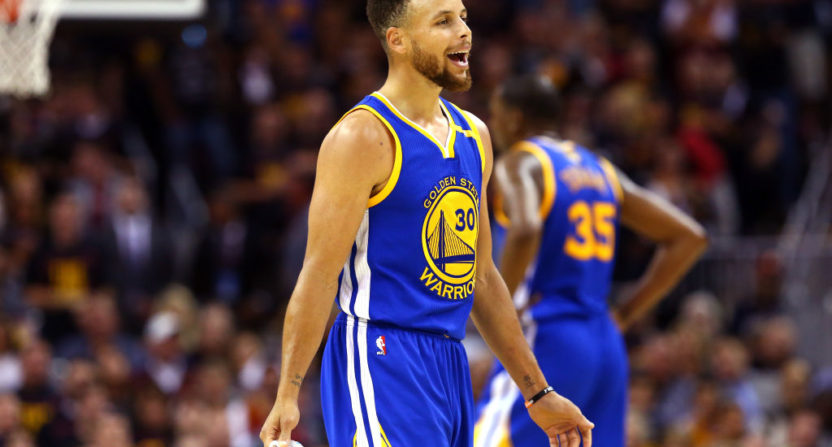 The sports memorabilia market can be a valuable and insanely expensive hobby. It’s become such a huge market that sports leagues do their best to grab anything and everything possible for various reasons. Sometimes, it’s to send to their hall of fame. Sometimes, the player wants something to remember their feat. And sometimes, it goes to auction. Which is exactly where Stephen Curry’s Golden State Warriors jersey from Game 3 NBA Finals ended up.

While on the auction block, Curry’s jersey went for $135,060, according to ESPN’s Darren Rovell. This is a new record for a piece of memorabilia auctioned off by the NBA. In Game 3, the Warriors won in Cleveland and went out to a 3-0 lead in the NBA Finals. It wound up being the only win by an away team as the Warriors won the NBA Championship in Game 5 in Oakland. Curry had 26 points and 13 rebounds during Game 3.

The person who spent the money for this jersey sure spent a lot of money. For a frame of reference, Curry’s jersey went for $135k and the previous record was Kobe Bryant’s final All-Star Game jersey, which sold for $100k.

Curry’s jersey wasn’t the only jersey from Game 3 that was auctioned off. LeBron James’ jersey went for $92,020, Kevin Durant’s went for $71,260 and Andre Iguodala’s went for $31,706. So even though Curry wasn’t exactly the player of the game during Game 3, the fans love him. Or at least one fan loves him as much to spend that much money for one of his jerseys.