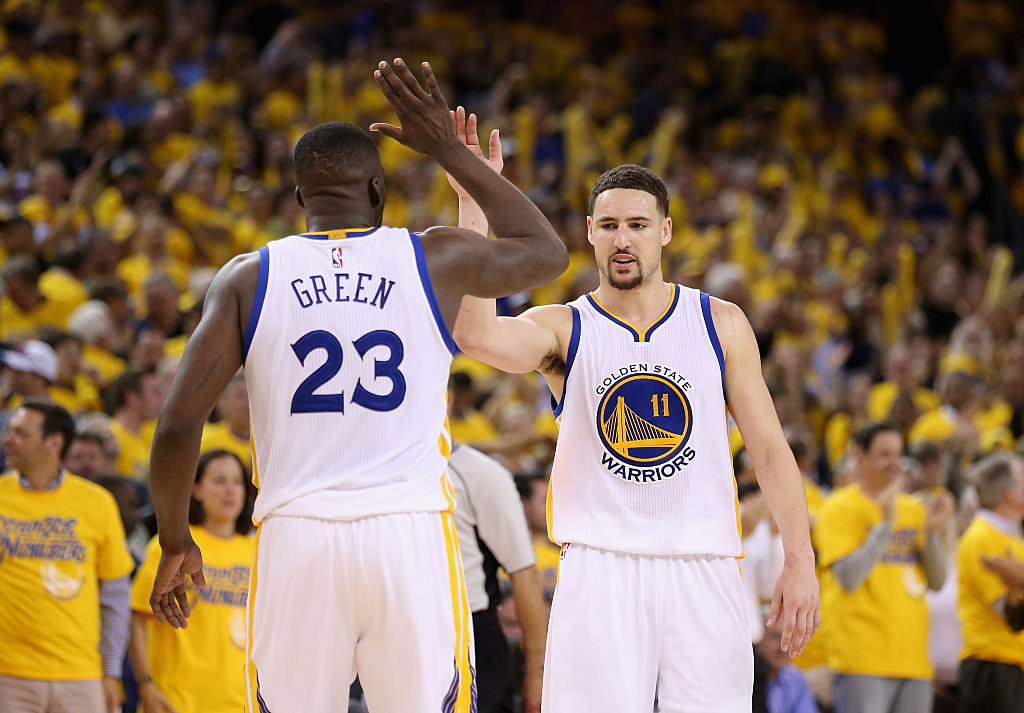 People are starting to notice that the Golden State Warriors are pretty good, even without Steph Curry.

This takes a little getting used to, the notion that a team can lose a transcendent player and still look at times like it doesn’t even miss him. In their second-round NBA Playoffs series, the Warriors outscored Portland by 20 points in the first quarter of Game 1, and by 20 points in the last nine minutes of Game 2, inflicting the same sense of “Auntie Em, Auntie Em, it’s a twister!” opponents have grown accustomed to these past two years.

When the dust clears, however, Steph Curry is nattily attired on the bench, trying to remember not to pick up his teammates in celebration, rather than heading to the locker room with his mouthpiece dangling from his lips. The damage has been done by Klay Thompson, Draymond Green, Shaun Livingston and Andre Iguodala, with help from Harrison Barnes, Andrew Bogut, Mo Speights, Festus Ezeli, and Ian Clark.

Golden State has played three-and-a-half games since Curry went down with the right knee sprain from which he is currently recovering. Previously, he missed two-and-a-half games after tweaking his right ankle late in the first half of Game 1 of their first-round series versus Houston.

In other words, the Warriors have had their MVP for two of 14 halves in this postseason, and they’re 6-1. Their one loss came by one point, on the road, in what was possibly the worst game of the season for Draymond Green, and one of the five worst games for Klay Thompson. Even so, they had the ball with two seconds to go and a chance to win that game.

Suddenly, the hot topic on the national talk shows is whether the Warriors even need Steph Curry!

When he first got hurt, the consensus opinion was that the Dubs didn’t have a chance. They could maybe beat Houston, but the Clippers would be too much for a Steph-less Warriors team.

As usual, the truth (as I see it, anyway) is somewhere in the middle.

The Warriors without Steph Curry are a very good basketball team. They would go deep into the playoffs under just about any circumstance, and I feel they would have handled the full-strength Clippers rather easily. Let’s keep in mind that the Clippers lost a game to Portland WITH Chris Paul and Blake Griffin. They lost because DeAndre Jordan can’t shoot free throws and because, outside of Paul and Jordan, they play an indifferent brand of defense.

While the Warriors certainly miss Curry on both ends of the floor, his absence doesn’t create a weakness akin to Jordan’s free throw shooting or Jamal Crawford’s defense. They’re just “less good” when he’s gone; they’re not bad at anything.

Having dispatched the Clippers in our imaginary tournament, the Warriors’ attention would have turned to San Antonio. (In my opinion, OKC has won its last game of the season.) This is where things would get very dicey for the Warriors without Curry. His presence on the floor creates spacing that is essential when playing a good defensive team like the Spurs. It doesn’t make as big a difference when playing bad defensive teams like L.A., or undersized teams like Portland.

I think you’d have to favor the Spurs over the Warriors if Steph was going to miss the whole series. That doesn’t mean the Warriors couldn’t pull it off, just that it would be an upset.

While the Warriors’ success against Houston and Portland has been eye-opening, it must be kept in perspective. The Rockets are a terrible, dysfunctional team with one great offensive player. Even without Steph, the Warriors probably grumble privately that they ever lost a game to that team. The Blazers are more talented, cohesive, and much better coached than the Rockets, but they’re still young. They made mistake after mistake in their Game 2 collapse, starting with thinking that the game was theirs with 12 minutes yet to play. Portland hoisted 3-pointers and shot early in the shot clock, and as those misses piled up, so did the Warriors’ fast-break points.

Those are things the Blazers won’t do in one or two years, just as the Warriors don’t do them any more. Portland is a very difficult place to play, and it wouldn’t shock me if the Blazers won a home game. But I think this is, at most, a five-game series.

The most important thing which has happened for the Warriors during this postseason is that they have developed a rhythm without Curry in the lineup. The coaches have figured out rotations that make sense, with player combinations that complement each other. Kerr was so consistent with his substitutions during the season that it was a huge adjustment for everybody when Steph went down. Thompson understands that he needs to “hunt his shot,” as he likes to say, but they still have to be good shots. He got into trouble in Game 2 rushing his release, and I doubt that will happen again in the series.

Green, who does much more play-making with Curry out, has said in several interviews that there were lots of passes he would try in the regular season that he won’t try now, because possessions are so important. He has only four turnovers in his past three games, with 26 assists.

Livingston, whom I like to call “an 11-year overnight success,” is becoming a star. The Warriors are Livingston’s 10th team, and the first for which he’s played two full years since the Clippers, who drafted him in 2005. He’s single-handedly bringing back the mid-range jumper, said to have gone the way of the saber-tooth tiger.

In truth, all of the Warriors have had their roles change a little with Curry out, and they’ve all made the adjustments needed to maintain cohesion on the floor. This will make the team even better when Curry comes back, because the other Warriors have usually deferred to him in ways that probably weren’t healthy. Steph’s just so good in clutch situations that there is always the temptation to give him the ball and get out of the way. While that worked several times in the regular season, it’s going to take more to get past San Antonio.

In basketball, like real life, you don’t know what you’re capable of until you’re forced to find out. The Warriors have been living that reality since halftime of the first game of the playoffs, and they have to be pretty pleased with the results.

It doesn’t mean they don’t need the reigning NBA MVP, though.