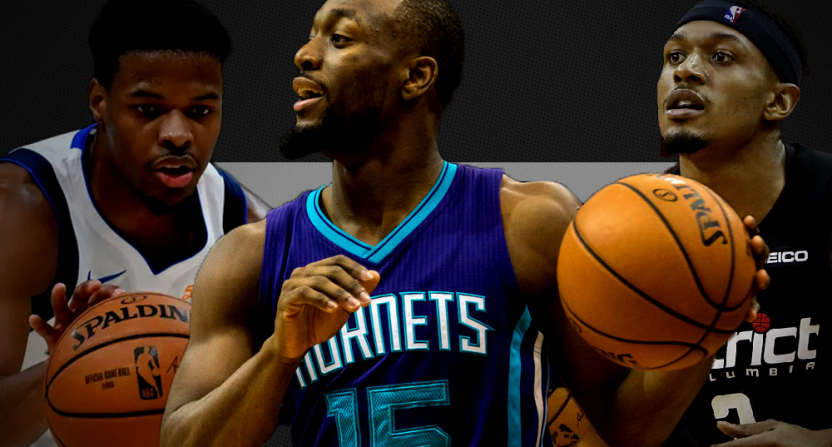 The NBA trade deadline is less than a month away. With teams gearing up for playoff runs, there likely will be plenty of action on the trade front between now and then. As everyone jockeys for playoff position and tries to put the pieces in place to see if they can be the one to finally stop the Golden State Warriors, here are ten players who could be moved before the February 7th trade deadline.

It was just a year ago Smith Jr. was anointed the Dallas Mavericks franchise point guard, but after a reported falling out with coach Rick Carlisle with the emergence of super rookie Luka Doncic, Smith Jr.’s name has been said to be very available.

Smith Jr. is an explosive point guard who’s not afraid to carry the bulk of the scoring. Drafted ninth overall out of North Carolina State in 2017, Smith Jr’s had an up-and-down season. In 28 games, he’s shooting 43 percent from the field and 37 from three, while averaging 12.6 points per game, 3.9 assists and 1.4 steals. Smith Jr’s usage was cut severely in favor of Doncic, so naturally, his numbers are down across the board.

What’s hurt Smith Jr. is he’s been a subpar passer (3.1 turnovers vs 3.9 assists per game) who’s scorer mentality puts him in some pretty hideous company.

Dennis Smith Jr. is just the second player in NBA history to attempt over 1,200 shots within his first 100 career games, yet shoot below 41% from the floor and below 70% from the free-throw line.

The other is Michael Carter-Williams.

Still, at 21-years-old, Smith Jr. has the skillset to be an above average starting point guard. He’d benefit from a change of scenery and it looks like Dallas will do everything they can to make sure that happens. Smith Jr. and the Mavericks are heading for a quick but mostly painless divorce.

Despite the 2017 NBA Draft being point guard-heavy, outside Sacramento’s De’Aaron Fox, it’s been a real mixed bag at the position. Fultz, selected first overall by the 76ers, represents the biggest bust.

In two seasons, Fultz has suited up in just 34 games for the 76ers and hasn’t ever looked comfortable on the court. The 20-year-old has been a complete mystery, losing his ability to shoot and missing prolonged periods of time with mechanics issues. It’s hard to tell whether it’s mental or physical. It might be both.

Fultz has been out since later November with thoracic outlet syndrome. It’s entirely possible the nerve issue screwed up his shot. Fultz is set to play again this season, but Philly might want to move on and let another team navigate through his issues. If he’s made available, there will be numerous suitors who will attempt to fix him and unleash his full potential. Whether that’s possible is a whole different story.

The Bulls appeared to take a risk (with big potential upside) when they gave Parker a one-year, $20 million deal with a team option. While Parker has been plagued with injuries since joining the league in 2014-15, his scoring touch mixed with his relative youth (23-years-old) seemed like a good gamble. Unfortunately, it has proven to be a bad match.

Parker’s scoring numbers have been okay as he’s averaged 14.8 points, 6.7 rebounds and 2.2 assists in 32 games. However, his defense and his motor are seriously questionable. After signing the big deal, Parker openly admitted that “they don’t pay players to play defense.” However, new Bulls coach Jim Boylen is fine paying him not to play, sitting Parker 12 out of 13 games before the former Duke star cracked the rotation again.

It’ll be fascinating to see what kind of return Parker can get the Bulls. He’s an all-offense player who’s probably best suited coming off the bench where his weaknesses can be hidden better. He’d be a great buy-low candidate, but let’s stop pretending Parker’s on the verge of becoming a star or something that’s he not.

Ariza’s season must feel incredibly long as this point. After signing a one-year deal to add veteran leadership and three-point shooting to the Suns’ depleted roster, Phoenix traded him to Washington Wizards twice (one attempt hilariously failed) for a second go around with the club.

Since joining the Wizards, Ariza’s usage has skyrocketed, as he’s lobbing more than eight three-pointers per game. A rough stretch dropped his three-point percentage to .310 with Washington, but I’m willing to bet that’ll rise with time, as he’s shot at least 34 percent in every season since 2011-12.

With Washington falling even further out of playoff contention each day, Ariza would be a perfect three-and-D rental for a contender.

I’m still not 100 percent convinced Washington’s got the cojones to trade Beal, who’s been one of the team’s few positives in 2018-19. The 25-year-old shooting guard is arguably the NBA’s hottest player and his game has only gotten better since backcourt-mate John Wall went down with a season-ending injury.

In 44 games, the 25-year-old is averaging 24.8 points, 5.0 assists, and 5.0 rebounds per game, while shooting 47 percent from the field and just under 36 percent from three. In January, he’s been lights out, out, averaging a robust 31.3 points, while dishing out nearly seven assists per game. Beal’s proven to be more than just a shooter. He’s also a capable playmaker.

If Washington really wants to rebuild, Beal will be no problem to trade, even with more than $55 million owed to him in the next two seasons. He might be the highest-impact player available on the market. Beal won’t be cheap though, as a team acquiring him can expect to pay a ton in future assets. But he’s worth the investment.

The next Wizard to make the list is the hardest to guess, value-wise.

There’s no doubt the 25-year-old can ball, as he’s averaging a solid 12.6 points, 5.6 rebounds and shooting nearly 40 percent from three. Porter Jr. is also a good defender and a hard-working player. At 6’9″ he’s got great length for his position.

However, contract-wise, Porter Jr. is massively overpaid. The Georgetown product is owed $55 million over the next two years. That’s a lot for a guy who’d check out as the fourth-best player on most teams. He’s a good rotation player getting paid like a superstar talent. He’ll be a tough sell on the trade market.

A majority of Washington’s cap space is tied up in Beal, Porter Jr., and Wall. So if they got back some assets and dumped Porter Jr’s salary at the same time, you’d think they’d do it. Either way, they need to move someone to get out of the luxury tax.

Charlotte faces an interesting predicament with their best player in franchise history. In the last year of an extremely team-friendly contract, Walker becomes a UFA once the season is over. The two-time All-Star has given his all to the Hornets but the organization has failed to surround him with enough talent yet again.

Walker has hinted he’d like to stay in Charlotte, but the organization should be worried he won’t stick around if the Hornets miss the playoffs again. It’d be a real shame to see the 28-year-old in a different uniform.

Walker’s been dynamic in 43 games this year, averaging a career-high 25.2 points, along with 5.7 assists and 4.2 rebounds. It’d be fun to see what he could do with more talented teammates. Earlier this season he scored 60 points and the Hornets still lost.

If Charlotte isn’t getting the vibe Walker wants to stick around, they’d be wise to move him and get a great package of young players and draft picks. In the meantime, Hornets management will try hard to re-sign him and keep him in Charlotte for the foreseeable future.

Robin Lopez is the forgotten man in Chicago as the veteran center has stayed out of the Bulls ongoing drama up until recently. Lopez reportedly wants out, but the organization is refusing to buy him out as they think they can get some assets for him. I don’t blame the Bulls for seeing what they can get.

Despite seeing his usage and court time decline, Lopez is still an effective backup center. He’s solid in the post and is a plus defender at his position. The 30-year-old is rumored to want to join the Golden State Warriors, which makes sense as he’s literally the perfect backup for a contending team.

The Bulls should be able to get a decent draft pick or young player for Lopez if they want. If he doesn’t get dealt, then they can cut him anyway. But for now, Chicago knows he’s a valuable role player and doesn’t mind keeping him until someone pays the right price. I think a team will.

Ross seems like the perfect trade deadline player. The 27-year-old is a great three-point shooter who’s high-flying energy makes him one of the more exciting players to watch in the NBA when he’s on. Coming off the bench for a fringe playoff team in Orlando, Ross has averaged a career-high 13.7 points while hitting 38 percent of his shots from three. He’s shown himself to be a much more consistent player than he was in Toronto, as he’s matured outside his three-point shooting.

There will be many suitors looking at bringing in Ross as a rental. He’s a professional scorer on an expiring contract. If he doesn’t get traded, I’ll be shocked.

In his second season in Los Angeles, Caldwell-Pope’s role has diminished as the Lakers infused some of their younger talent into the game instead. Caldwell-Pope is still getting 23.5 minutes per game off the bench, but considering he started 74 games last year, his role has obviously been reduced. Re-signing with the Lakers this year seemed bizarre at the time and was probably the wrong decision. In LA, he’s the odd man out.

Still only 25, Caldwell-Pope remains a good role player who is also a plus defender. The Lakers defense is better with him in the lineup. In 45 games (five starts), he’s averaging 10.1 points and 2.7 rebounds while shooting 34 percent from three. He’s a good-not-great player who could be had for relatively cheap. Caldwell-Pope can veto any trades, but if he got the opportunity to play more minutes and get more shots on a different team, he’d have to be all over that.