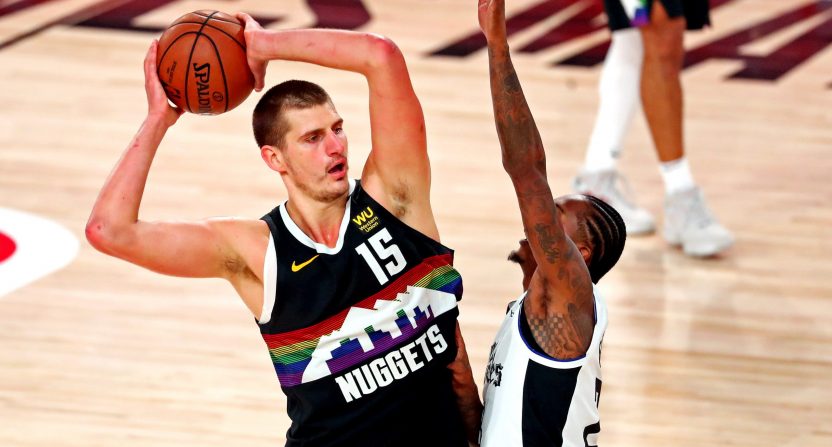 With less than a minute left against the Los Angeles Clippers, Nikola Jokic enjoyed the fruits of his methodical conquest. He dished a no-look, over-the-head pass under the basket to Jamal Murray, his partner-in-crime, that resulted in a shooting foul. Denver was up 20 by this point in a historic Game 7.

Denver had completed a 3-1 comeback for the second series in a row. This time, they shocked the world by knocking out the vaunted Clippers, playing joyfully as though they had nothing to lose, and riding their eccentric whip-smart style as far as it could take them.

The biggest story of this series was Jokic, a court-shifting, game-deciding superstar like the NBA has never seen before. He took over in Game 7, producing one of the most impressive and unorthodox single-game performances we’ve seen in a long time.

As a center, already the consensus best passing big man ever, he was the floor general for the Nuggets. He oversaw everything, vastly outperforming Kawhi Leonard and Paul George, the players who are supposed to oversee things.

He did all of this while scoring 16 points on 5-of-13 shooting. We’ve never seen anything like this. Jokic, 7’0″, 253 pounds, frequently dribbled the ball up the court like a point guard, pushing the Nuggets on the break and painting the court with all-seeing vision. His playmaking assertiveness can be rivaled only by another floor general who thrives on vision, like LeBron James or Chris Paul. It’s hard to process that we’ve just seen a center, a seven-footer who does not move gracefully, control the game in a fashion similar to James and Paul, who are both essentially point guards.

Jokic’s decision-making is so pristine that it has become his defining skillset, the element of his game that drove his domination of the Clippers’ star-studded defense. It wasn’t his savvy post moves or his pick-and-pop threes that took out the Clippers here. Instead, his ability to make the best out of every situation flummoxed his opponent. No five players on the court, even the Clippers’ cast of All-Defense first-teamers, could muster the combined brain power to outfox Jokic at his assertive Game 7 peak.

Only LeBron could have moved the chess pieces around the court in the way Jokic did. This is where Denver’s supporting cast comes in, especially Murray, whose ridiculous shotmaking and exuberant confidence pushed the Nuggets to the finish line. Everyone around Jokic knows who they’re playing with, and knows exactly how to contribute. The cuts, the drives, and the shooting are all there. They know to look for passes.

The pick-and-roll dance between Murray and Jokic is more fun to watch than any in the league. Its success rate is not one hundred percent, but it looks purposeful every time. There is no aimless movement. It has ideas. Both players look like they have a perception of how an NBA offense should work every possession. They problem-solve on the fly, adjusting their hand-offs to counter defensive strategies and creating new reads.

The players around it fit seamlessly. Jerami Grant moves around the three-point arc as a willing shooter, and finds incisive cuts into defenses that guard the long-ball. Gary Harris, Monte Morris, and Paul Millsap are all heady players who fill the right gaps and can do things with the ball. Harris and Morris can create their own shots, a skill that is particularly effective when Jokic or Murray drives and kicks.

None of it can work if the surrounding players don’t have full confidence that Jokic sees all. When they make a cut or take a few steps along the three-point arc, they know to look for the ball. Jokic connects on passes that only LeBron could reasonably find, and he’s incredibly accurate. He doesn’t force shooters to catch balls on a hop, and he hits cutters in stride.

The Clippers have numerous high-caliber defenders. Despite this, the Nuggets were able to find shots at the rim and draw fouls through little cuts and tight dish passes. Jokic rendered good defenders irrelevant. Someone like Patrick Beverley, an elite stopper who does not take possessions off, could stick close to Murray only to concede a bucket because a Jokic pass was so well-timed that Beverley had no realistic chance to disrupt it.

The control this ability gives Jokic is massive. Double-teaming him in order to get the ball out of his hands requires precise timing. Jeff Van Gundy brought up one opinion on the ESPN broadcast, from Gregg Popovich: double-teaming Jokic is only possible if Jokic doesn’t expect it. Such is the respect for his passing.

Finding those double-team opportunities is not easy, not least because Jokic has an exceptional understanding of what’s going on at all times. The Clippers did not have the defensive cohesiveness or collective understanding to execute such a plan.

Jokic ran essentially every possession that he was on the floor. (He played 39 minutes, sitting more than expected due to foul trouble.) He’s one of the most effective screen-setters in the league, understanding every time whether to dive to the rim, pop to the arc, or call for a pass immediately to exploit an unstructured defense. His hands are improved, making it hard to strip him. His post-moves are savvy, and he has made tough shots from everywhere on the floor in these playoffs, forcing defenders to honor him.

An offense based around a player like Jokic seems like it shouldn’t work to this extent in the playoffs. One would think that a Game 7 scoring performance like this from the offensive centerpiece (38 percent from the field? 0-4 from 3?) would mean elimination. Jokic instead dominated every other section of the game, though he still incinerated Montrezl Harrell as he did for most of the series. He finished with 13 assists (13!) and 22 rebounds.

He made the right decision every time he had the ball, and in this game, that meant he didn’t have to score all the time. Some of those missed shots were desperation attempts late in the shot clock, not assertive attempts at the rim. He excised fadeaway mid rangers in favor of pinpoint passes, often after a screen dance with Murray or punishing post moves to force help.

Rivers tried putting other players on him, a ploy he should’ve gone to earlier in the series. Often, it was JaMychal Green, and sometimes it was Leonard or George. Nothing worked. Jokic knew what to do every time. The Nuggets were a glorious, whirring offense for much of the game, with everything orbiting around their Serbian star. They weren’t quite the 2014 Spurs, but they played with a decisiveness that can only come from familiarity. The Clippers couldn’t match it on either end.

Jokic’s performance was so complete that the game became a blowout. His 22 rebounds were not empty calories. He was out-fighting and boxing out the Clippers to prevent second-chance opportunities. He wanted the ball every time it clanged off the rim so he could get a fastbreak started. We didn’t see any of his patented outlet passes in this game, but there were multiple instances in which he quickly found a teammate running up the floor or traversed the court himself. Those opportunities gave Denver easy points and created mismatches.

On defense, Jokic was no liability. He has looked like a big weakness on that end at times during this insane Nuggets playoff rollercoaster, but in these last three games against LA, he has acquitted himself well. Particularly in Game 7, he played with an energy that belied his continuing defensive inaptitude. He stayed in front of pick-and-rolls and contested jumpers and layups. He vacuumed defensive rebounds. Nothing was easy for Leonard.

Jokic has figured out how to exert maximum influence over postseason games. This is a progression every NBA superstar has to make at some point, and only a select few currently playing have. Giannis Antetokounmpo very publicly has no idea what to do in the playoffs. James Harden, though he’s had his successes, hasn’t really figured it out. Jayson Tatum and Luka Doncic seem to be getting close, if they’re not already there.

The playoffs are hard. The Nuggets have cracked a code, and used it to knock out a noted playoff killer in Leonard. Jokic commanded a highly-efficient and resourceful offense. Murray clearly made a leap in the playoffs, staying red-hot and playing the role of flamethrower, even as Leonard and others hounded him. Murray is Jokic’s perfect dance partner, a savvy ball-handler and willing passer who can morph into a dominant shooter at any moment.

Jokic makes all of it work. He put together his magnum opus, to this point, in Game 7.

The Clippers, meanwhile, have just finished a collapse of epic proportions. It’s hard to find such a favorite, such an on-paper juggernaut, that has fallen apart so early and so completely. There didn’t seem to be chemistry issues. Their weaknesses were below the surface. They boasted two bonafide superstars, one of which being the reigning Finals MVP with one of the most well-earned clutch reputations in the league. They had a 3-1 lead.

Maybe this series will always be most closely associated with the legacy of this Clippers team. It will be about Doc Rivers’s dismal post-Celtics playoff record, Leonard’s Game 7 disappearance, and Pandemic Paul George. It will be about the bygone Battle of LA in the conference finals, and how the Clippers went all-in like almost no NBA team ever has.

But LA got beat soundly and legitimately by a team that just played better. The Nuggets are a cohesive unit that has been together for years, growing steadily with its superstars and building a robust culture. Jokic and Murray have played elimination games before, winning some and losing some, and now they’ve put together their second miraculous comeback in a row. This Nuggets performance is a marked victory for roster building over the immediacy and the acceleration of the big-market Clippers, who jettisoned every draft pick possible to assemble what was supposed to be a super team.

This small-market victory is unlikely to change the direction of the NBA, which will see more versions of the Clippers and more super-talented teams assembled on the fly. (Denver gets another one next round.) But for the NBA’s underdogs, this is an immensely pleasing victory, one that will reverberate for years.

Jokic’s unprecedented performance sets a new standard for how a big man can control a game. The Nuggets are here to stay. Regardless of what happens in the conference finals against the Lakers, they’ve compiled one of the most memorable two-round playoff performances in history. Somehow, it’s all based around a sun king of a center, a maestro with the ball who always knows what to do.