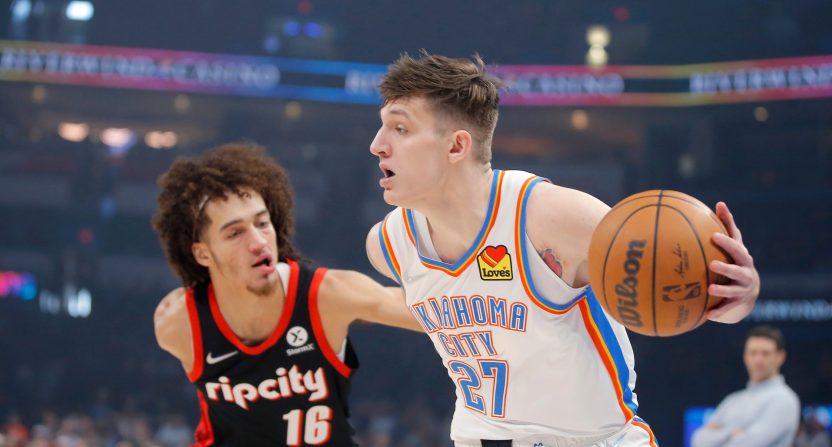 The Atlanta Hawks found themselves staring down a situation where they’d enter the 2022-2023 NBA season around $1.7 million over the luxury tax threshold. However, the situation is officially null now that they’ve completed a trade with the Oklahoma City Thunder.

Per The Athletic’s Shams Charania, the Hawks have traded Moe Harkless and a second-round pick to the Thunder for Vit Krejci.

Sources: Oklahoma City is trading Vit Krejci to Atlanta for Moe Harkless and a second-round pick.

Because Krejci is on an NBA minimum salary that is not guaranteed, swapping Harkless’s $4,564,980 salary means that the Hawks are under the luxury tax.

The Czech player was the 37th overall pick in the 2020 NBA Draft but hasn’t quite developed as hoped, finding himself on the outside looking in when it came to playing time this season in OKC. The trade gives him a chance for a fresh start and to potentially earn a better contract. The 22-year-old point guard played in 30 games last year, averaging 6.2 points, 1.9 assists, and 3.4 rebounds per game.

Harkless, meanwhile, is a 12-year veteran who was packaged as part of a trade to the Hawks back in July after two seasons with the Sacramento Kings. While his best days are certainly behind him, there’s a chance he could find a role on the Thunder roster. He might also get bought out as the draft pick was their real value in the trade.

However it all shakes out, the NBA world had some strong reactions to the trade and the way it impacts Atlanta’s salary situation.

Gets Atlanta out of tax, probably, and generates a $4.6 million TPE. ("Tax" is a flexible concept for Hawks due to Capela/Murray incentives). Krejci 50% guaranteed so I'm guessing he stays til ~midyear. Harkless likely a buyout guy for OKC. https://t.co/Qt6brH2vsC

This gets Atlanta out of the tax.

Pretty simple move across the board: Atlanta gets out of the tax, OKC gets a pick. https://t.co/1pEOQ1EZRN

By trading away Mo Harkless, this is almost a tale tell sign that Jalen Johnson has solidified the permanent backup 4 spot. Excited for our 2nd year player, as I’m super high on JJ. Time to wake up the league!

Tax avoiding move for Atlanta, taking them from $1.7M over to $1.3M below.

Vit Krejci doesn’t match for Mo Harkless even if his $1.6M salary gets fully guaranteed. Perhaps the Thunder are expecting to receive a DPE for Chet Holmgren worth $4.9M that could absorb Harkless. https://t.co/SsPQAVf3iG

OKC adds another draft pick to the war chest.

There’s a roster numbers crunch and OKC squeezes out a 2nd rounder while freeing up a spot.

Moe Harkless likely gets bought out.