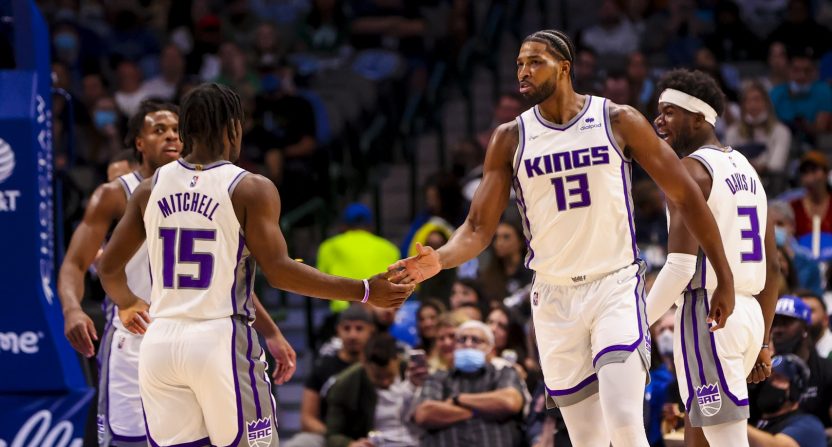 There isn’t a lot to say about the way the Sacramento Kings are playing basketball this season. However, it’s what’s happened after their most recent game that has the NBA world abuzz.

The Kings lost 107-97 to the Timberwolves on Wednesday night. Tristan Thompson did his part, coming off the bench to score eight points and grab nine rebounds in 17 minutes of action. But it was still the latest loss in a season that sees the Kings sitting at 6-9.

After the game, Thompson was asked about how the Kings players get motivated after an opponent goes on a scoring run and whether or not that motivation has to come from Kings coach Luke Walton or should come from the players. Thompson’s answer was blunt, to say the least.

Tristan Thompson sounds off on the leadership on this Kings team and why inspiration shouldn't come from the head coach. pic.twitter.com/4u9dqpoQih

“No man in this world should rely on another man to inspire them,” Thomspon said. “No one should ever need a coach to inspire you. If you don’t get inspired in a game then you shouldn’t be on the court. Losing teams, losing players, you need to get inspiration from your coach. I’m not with that s–t. My teammates better not be with it.

“It’s not about Coach Walton inspiring you. This is not no freaking ‘Glory Road’ s–t. You better be ready to play. Your number’s called in a damn game, I don’t need no f–king coach to inspire me. Never that. Never have. Never will. The day I need a coach to inspire me is the day I’m f–king retiring. I’m a go play with my kids at the park.”

Thompson, who also said that the Kings should have gone 4-0 on their current road trip instead of the actual 1-3 they ended up going, seems to have inspired a lot of people around the NBA world with his epic and NSFW rant.

Tristan Thompson unloading was probably the best press conference moment in the last 12 seasons in Sacramento. Some people won't like that it was him who spoke up, but someone had to be able to articulate the frustration.

Tristan Thompson’s postgame presser is the most interesting, emotional and honest assessment I’ve heard from any player. Held himself and his teammates accountable, and held nothing back.

Even dropped a Pitino homage: “C-Webb and Bibby ain't coming through that door." 😳

Time will tell if Thompson’s rant can fuel the Kings back in a positive direction, but the franchise hasn’t had a winning season since 2006 so don’t hold your breath.