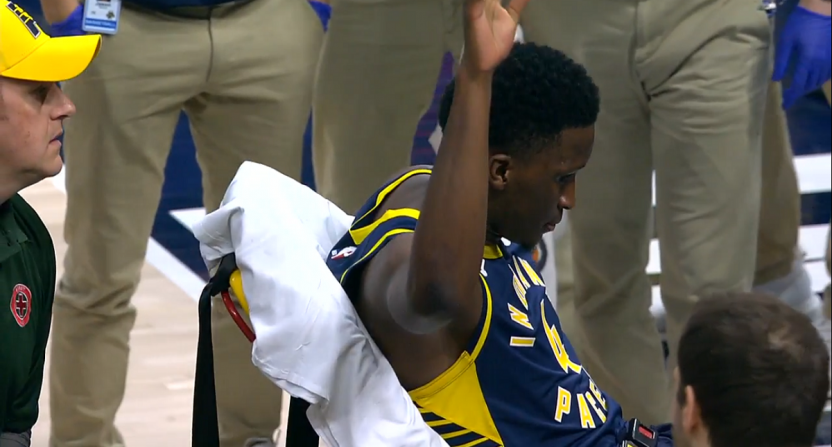 The Indiana Pacers have been one of the better stories in the league this year, but whatever hope they had at making an Eastern Conference playoff run may have ended tonight. That’s because Victor Oladipo’s knee ended up doing something that knees generally don’t ever do, buckling when Oladipo attempted to plant to break up a lob.

Not good at all. They immediately called for the team doctor and for paramedics to bring out a stretcher for Oladipo.

Meanwhile, his teammates are surrounding him.

That a stretcher was immediately called, with Indiana trainers putting a towel over the knee to obscure the view, brought to mind the Paul George injury for many Indiana fans, for obvious and very sad reasons.

Never a good thing when the trainer immediately grabs a towel to cover up an injury.

Oladipo eventually waved to the crowd as he was stretchered off the court, slapping a few hands of spectators on his way to the tunnel, but Oladipo is so damn positive all the time that it’s tough to read any possible good news into that interaction.

Pacers star Victor Oladipo is wheeled off in a stretcher after a right knee injury. pic.twitter.com/FKWmlTCXig

This really sucks, because while Oladipo hadn’t quite found the form he displayed last year (and earlier this season before a left knee bruise sidelined him for a few weeks) he’s still an electrifying player when he’s on, and the league is better with players like that.