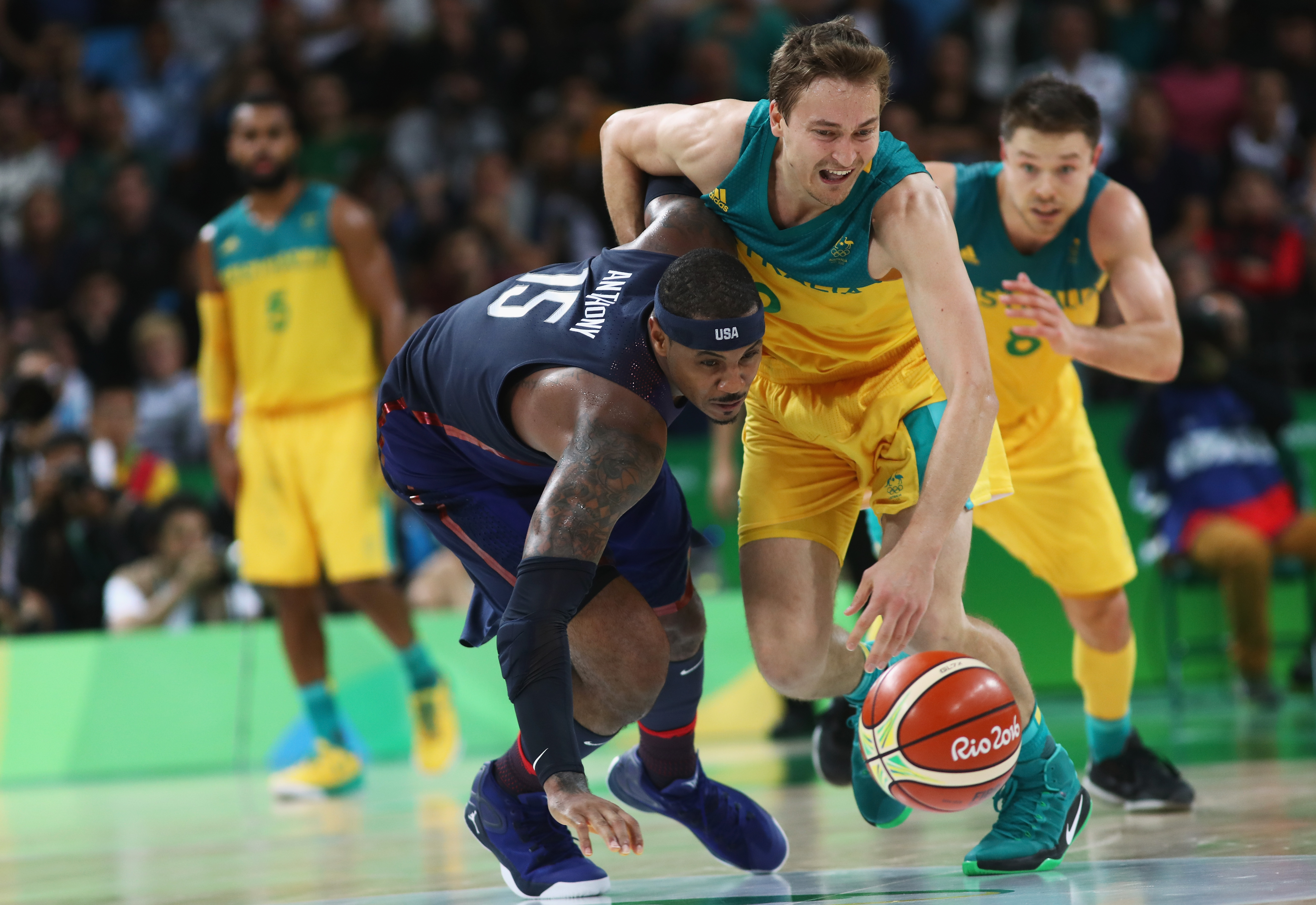 OK, so we knew going in to the Rio Olympics that there might be some bumps along the way for Team USA basketball. LeBron James, after all, elected to stay home this time around. Same goes for Steph Curry — you know, the two-time reigning league MVP — and Russell Westbrook and Anthony Davis and Chris Paul and a host of other studs who would have filled the holes on this current Team USA roster.

But still, it’s not like we sent a bunch of scrubs down to Rio. Kevin Durant is there, who most would tab as the NBA’s third-best player and a silky-smooth scorer with a game seemingly tailor-made for international play. So is Klay Thompson and his picturesque jumper. Carmelo Anthony is Team USA’s all-time leading scorer. Paul George and Kyrie Irving are perennial All-Stars who would easily be the top players on any other team in the tournament.

Things got off to a good start, too. There were five easy victories in exhibition play and blowout wins over China and Venezuela. Australia pushed Mike Krzyzewski’s crew a bit, but the Boomers are probably the second-best unit in the Olympics. They start five NBA players and Patty Mills led all Olympic scorers in 2012. And anyway, Team USA managed to pull away in that contest for a well-earned, nothing-to-be-ashamed-of 98-89 win.

However, it was after that game that things began to go off the rails. First, a Serbia team devoid of a single NBA All-Star came just inches away from forcing the USA into overtime.

Then on Sunday, the Americans allowed a Tony Parker-less France team to shoot 57 percent from the field before squeaking out a 100-97 win. This, after entering the fourth quarter with a 12-point lead.

Yes, a win’s a win, and the United States is 5-0 and enters the quarterfinals as Group A’s No. 1 seed. That’s the good news.

The bad news: Team USA hasn’t looked this vulnerable since Krzyzewski took over following the debacle from Larry Brown’s group in 2004. The U.S. hasn’t dropped a game since the 2006 World Championships and, prior to these Olympics, had won its last 34 FIBA contests by an average margin of 29.4 points.

“Obviously, everybody wants us to win by a lot of points, but it’s not how it’s going to go this time,” Durant said postgame Sunday, via USA Today. “We’ve got to be prepared for a grind-out game. We’ve showed the last three games we can grind it out.”

That’s one way to look at things, you certainly have to admire Durant’s glass-half-full mentality. But he’s also glossing over the fact that Team USA is much bigger and stronger and faster and flat out better than the rest of the competition that it shouldn’t need to grind out wins.

Even more worrisome: it’s not like the team is being plagued by one weakness. Against Australia and Serbia, the offense was an issue. There was too much one-on-one play, too little ball movement, too many forced jumpers.

“We just have to start getting some movement. We’re relying on our natural talent so much. It’s so easy to guard us,” Paul George told NBCSN Friday night after the win. “Teams are just loading up and watching us play one-on-one.”

On Sunday, Team USA responded by whipping the ball around the floor. 32 of its 35 field goals came off assists. Also, the improvement helped spring loose the struggling Klay Thompson.

The issues against France came on defense. Durant allowed Nicolas Batum and others to cut backdoor on him multiple times. Kyrie Irving has never been strong at the point of attack. Opponents have realized that DeMarcus Cousins has no interest in stepping up on pick-and-rolls and are taking advantage.

“We gave them too many good looks around the basket and got complacent on defense,” Thompson said Sunday after the game. “We can outscore teams. But that’s not going to win us a gold. We’ve got to lock up, and we will.”

Thompson’s confidence is admirable, but it also might be misplaced. Team USA’s starting lineup features three players not exactly known for their defense: Kyrie, Carmelo and Cousins. Jimmy Butler and Draymond Green are studs on that end, but both have struggled adapting to the international game and neither are seeing major minutes.

As a whole, Team USA has often looked helpless when going up against quick ball movement that other countries have unleashed.

Team USA’s primary strength, and what it’s ridden to success over the past decade-plus, is the ability to put five super-athletes on the floor, have them unleash hell on defense and push the pace on offense. Then when they tire, sub in some fresh legs to do the same. For some reason, that same effort is not being devoted to defense this time around.

Maybe it’s because this group of players aren’t capable of doing so — though that’s hard to believe. Maybe it’s because there’s no LeBron or Kobe or Dwayne Wade to set an example. Maybe this is what happens when you send your not-quite-A-team, don’t given them much practice time, and ask them to compete against teams that have been playing together for years. Maybe it’s a mixture of all of the above.

Whatever the problem, Team USA has just days to figure it out. Pool play is now complete; lose and you go home. Team USA has almost been knocked out three times over the past week. If it doesn’t get its defense in order and offense under control, it could be a repeat of 2004 all over again.